For 32 years, the father-and-son duo of Dick and Rick Hoyt completed the 26.2-mile Boston Marathon trek from Hopkinton to Boylston Street in downtown Boston — with dad Dick pushing Rick, who has cerebral palsy, in a wheelchair the entire way.

The Hoyts ran their last Boston Marathon together in 2014.  On March 17 of this year, Dick Hoyt died at the age of 80 after battling a heart condition.

The 2021 Boston Marathon won’t take place next Monday — Patriots’ Day — as planned due to the COVID-19 pandemic, with the race instead scheduled to be run on October 11 to ensure as much safety as possible as COVID vaccinations continue. But with that familiar date approaching, Rick took time to reflect on the man who showed him what it was like to run in an interview with WBZ.

“He was my motor, I was his heart,” Rick said of his father.

Rick was born with an umbilical cord around his neck that deprived him of oxygen, causing brain damage and cerebral palsy that left him unable to move his limbs or speak. Fortunately, Tufts University engineered a computer allowing him to communicate using his head to tap letters and spell out words. He now uses a computer voice program to speak.

Dick and Rick ran their first race together — a benefit run — back in 1977. And the experience set a course for what would become a lifetime of running for the pair.

“After the race, I could not wait to get to my computer to tell my father how I felt,” Rick said of his first race. “I wrote’ ‘Dad, when we are running, my disability seems to disappear.’”

From that point, the two completed more than 1,100 races, including 5Ks, marathons, and triathlon competitions. Additionally, they ran the Boston Marathon every year from 1980 to 2014, sometimes unofficially, only failing to finish the race in 2013 due to the marathon bombing. From 2015 to 2018, with Dick unable to run, Rick Hoyt was pushed by Team Hoyt member Bryan Lyons, who died in 2020.

“I learned about trust. I learned to rely on him to endure physically so we could compete together,” Rick said of his father.

“He’s the one who has motivated me because if it wasn’t for him, I wouldn’t be out there doing triathlons,” Dick once said of his son in an interview. “What I’m doing is loaning Rick my arms and legs so he can be out there competing like everybody else.”

Though 59-year-old Rick says he can no longer endure long races because of his bouts with pneumonia, he said he will be watching the marathon on TV and remembering his father’s most important message:  “Never give up on your dreams.” 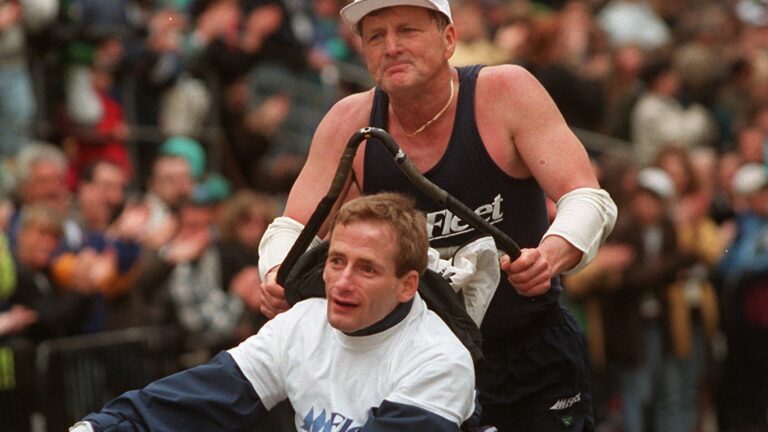