As the women’s elite race at the 2022 Boston Marathon progressed Monday, the absence of Molly Seidel, one of the top U.S. runners in the field, became notable.

Seidel, who won bronze in the marathon at the Tokyo Olympics, dropped out of the race around mile 16 with an injury to her hip.

In an Instagram post Tuesday morning, she opened up about her struggles during “one of the hardest races of my running career” and elaborated on her decision to pull out of Boston.

“There are days when you have it and days when you don’t. I have no excuses to give; I gave it my all and it wasn’t good enough,” she said.

Seidel explained what happened after she started to fall out of the leading pack including eventual winner Peres Jepchirchir and runner-up Ababel Yeshaneh.

“I ran outside my fitness, underestimated the downhills, and paid for it,” said Seidel, who was running in her first Boston Marathon. “And when my muscles started to go, my form got sloppy and aggravated the hip impingement I’ve had on-and-off this build. At halfway it was hurting, and by 16 it was clear there was no way I could keep running without really injuring myself. So I made the decision to drop out.

“I went into this first Boston wanting to learn, and I got one hell of a lesson from that course. It’s embarrassing and gut-wrenching to put yourself out there and shoot for something big only to fall short on the biggest stage. To put it frankly, I’m really freaking disappointed in myself and how I raced yesterday. It’s a hard pill to swallow to know you went for it and didn’t have the stuff to follow through. I’ve raced every marathon trying to come right up on the edge of what I was capable of, and yesterday I hit it. I sacrificed finishing Boston because I shot for it too big early on, and I hurt myself in the process. That’s it.”

Seidel is still relatively new to the professional marathon scene, with her first race at that distance coming in the U.S. Olympic Trials for Tokyo in 2020. She finished second in that race and went on to finish sixth in the 2020 London Marathon before her bronze medal in the Tokyo Olympics last year. She also had a fourth-place effort at the New York City Marathon in November.

Her nascent streak of top-10 finishes came crashing to a halt on Monday, though she said the move to end the race was necessary to keep her healthy enough to run the rest of the marathon season: “Part of this sport is knowing when you’ve gotten got, and I certainly got gotten good.”

“Took the time yesterday to process and feel sorry for myself, ate my donuts, drank some beers, and hung with family and friends. Yeah it sucks. But there’s more things ahead, and failing at something doesn’t make one a failure, it means you’re learning.

Boston, you are still my favorite city, and I cannot wait to eventually finish this damn race. Until then, I’ll keep dreaming of the day I get to run down Boylston St.” 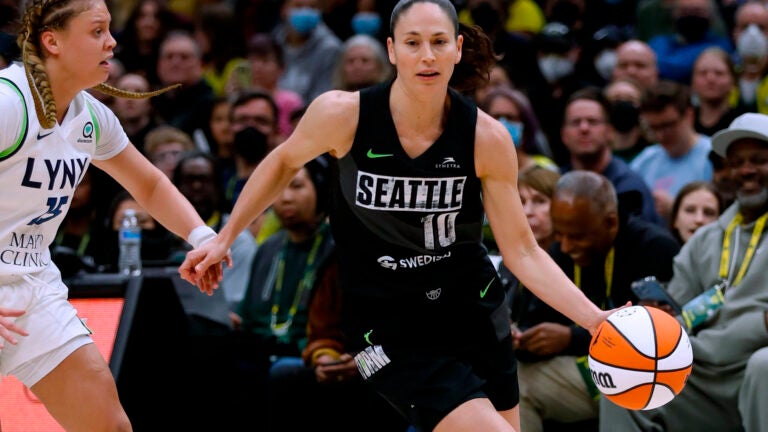 WNBA star Sue Bird says 2022 will be her final season