Not long after crossing the Boston Marathon finish line on Monday, Marko Cheseto Lemtukei looked into the camera of a WBZ-TV crew and offered a message of his own to the world.

“I want to tell people at home …get out of that couch and the power of mind – use that mind,” said Cheseto Lemtukei, a double amputee who topped the men’s group in the race’s Lower Limb Impairment division, finishing the marathon in just over two hours and 37 minutes. “And even if your body and the mind are not agreeing together, at least use one. You can either use your mind to push you or use your body to push you. Don’t think about it so much.

Cheseto Lemtukei, born in Kenya, lost both of his feet to frostbite in 2011 while he was a student at the University of Alaska.

He recalled on Monday how he thought “that was it for me.”

“It’s my feet that brought me to America, and then all of a sudden, I don’t have them,” Cheseto Lemtukei said. “But then as I was recovering, I told myself, am I really going to let this define who I am? Because I know our power is not outside us. It’s in us…I still felt like I was still the miracle that I knew.”

Determined, Cheseto Lemtukei said he would not let what happened bring him down, and that he wanted to be a living example for others to follow.

“I want a kid out there, he’s sitting there, trying to figure out, now, ‘I don’t have my feet. Now I have all these challenges in life. What am I going to do?'” he said. “I want them to know that the limitations that we think are out there, sometimes it’s not true. Our limitations are our thoughts. It’s what we are thinking.”

Monday’s race marked the second year that para-athletes with visual, upper limb, and lower limb impairments, like Chesto Lemtukei, were able to compete in their own divisions for prizes and awards.

Adrianne Haslet, who lost her leg in the 2013 Boston Marathon bombing, ran with Olympian Shalane Flanagan as her support runner.

Haslet, who finished fourth in the women’s group of the Lower Limb Impairment division, told WBZ-TV about how the energy of fans along the route kept her going so much so, that she didn’t even notice the mile markers until she was way past mile 20.

Haslet said Monday was “the best day of my life.”

“I’ve been through so much trauma and tried so many times to get to that start line, and I kept having to start over,” said an emotional Haslet, soon after finishing her second marathon in Boston. “I’m so proud of myself for getting through it.”

In the Upper Limb Impairment Division’s T45-46 classes Michael Roeger finished first with a time of 2:25:42 among the two runners in the men’s group. Batzorig Baasai came in second. 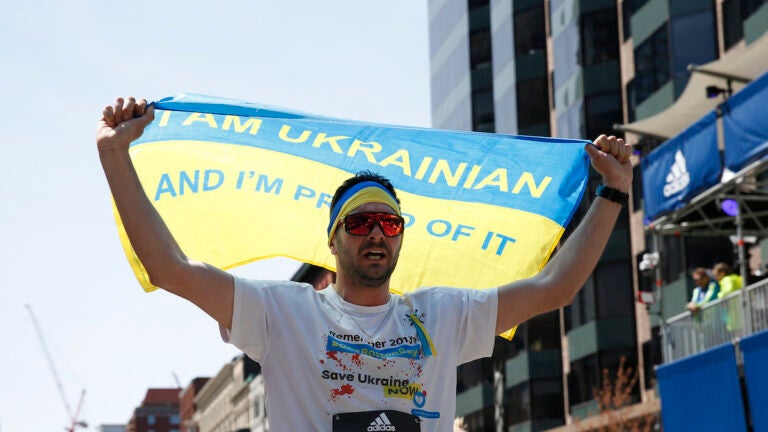 What Ukrainians said about running the Boston Marathon