DETROIT – In recent franchise lore, especially during those two glorious seasons that ended with a duck-boat coda, Red Sox relief pitchers have had to record some crucial outs in extraordinarily tense circumstances.

Consider pretty much everything Keith Foulke achieved night after improbable night during his career-altering performance in the 2004 American League Championship Series. Or Curtis Leskanic — ol’ Let’s Panic Leskanic — striking out Bernie Williams in a huge spot in that same series.

Three years later, Jonathan Papelbon earned the right to dance like an addled fool by coming through in the moments when everyone was too nervous to laugh. Hideki Okajima delivered in a quieter way, a Bud Light case never gracing his skull so far as we know, but his performances were just as essential.

During the Red Sox’ 1-0 victory over the Tigers Tuesday in Game 3 of the American League Championship Series, another relief pitcher recorded an out that, should these remarkable Red Sox go on to win their third World Series in 10 seasons, will be remembered as one of the pivotal moments along the way.

Maybe it deserves to be remembered even if the Red Sox, who now lead this series 2-1, don’t fulfill the genuine possibility of winning the World Championship.

For if we were called upon to name one relief pitcher who would come in from the Red Sox bullpen in the eighth inning, with one out, the tying run at third base and the go-ahead run at first and the mighty Miguel Cabrera at the plate, the vote among us would probably be unanimous:

But Red Sox manager John Farrell‘s vote dissented from conventional wisdom, and his was the only one that mattered. He did not turn to Koji Uehara, the 38-year-old closer who had one of the great relief seasons in baseball history, refusing to permit a run for nearly three months during the regular season.

Instead, he summoned Junichi Tazawa, a talented 27-year-old righthander, but one who had a 6.48 ERA in September and who allowed nine home runs in 68.1 innings during the regular season.

Sure, Tazawa has been dependable lately – he had allowed just one hit in five previous appearances this postseason. And the Red Sox, thin in those bridge innings from the starter to Craig Breslow and Koji Uehara, are counting on him to be that guy who can retire a dangerous righthanded hitter late.

But this was to face the great Cabrera, the most dangerous hitter in the game, the 2012 Triple Crown winner who may have been even better this season.

And you know what? It was brilliant.

Not just because it worked – Tazawa blew Cabrera away on four pitches, all fastballs – but because Farrell had the nerve to try it and knew why it would work.

“We liked the matchup with power against Cabrera,” Farrell said. “Cabrera has had good success against Koji in the past, hit a couple of balls out of the ballpark against him. And we felt power was the best way to go there. You’re getting the best guy in baseball at the plate, trying to preserve a one-run lead. That was a swing moment for sure. Then, obviously Koji came in and did what he did as well.”

Farrell is correct. Uehara’s performance cannot be forgotten, either. He’s recorded effortless out after effortless out with such incredible efficiency, but we still must resist taking it for granted. After Tazawa sent Cabrera back to the bench, there was still the matter of dealing with Prince Fielder, a quintessential go-for-broke slugger who once hit 50 homers in a season and, even in a relatively down year, managed 25 with 106 RBIs in 2013.

So how did that at-bat go? Remember, we’re not taking Uehara for granted … but it went about as we’ve all come to expect.

The ninth brought the suggestion of more drama when Victor Martinez led off with a single. But Uehara didn’t let it fester. Stephen Drew and Dustin Pedroia turned a quick double play on Jhonny Peralta, and Uehara recorded the final out himself, striking out Alex Avila.

The Red Sox knew their pitching would have to teeter on the edge of perfection with Justin Verlander on the mound for the Tigers. The former Cy Young winner built his postseason scoreless inning streak to 21 with six shutout frames against the Red Sox.

The Red Sox did not record a hit until Jonny Gomes‘s single in the fifth. But Mike Napoli — back in the starting lineup after beginning Game 2 on the bench — got all of a 96 mph fastball in the seventh, finally giving Lackey a run with which to work.

Lackey didn’t get through the seventh despite his protestations — part of his charm during this redemptive season is his attitude that he’s not giving up the ball unless it’s pried from his right hand. And he seemed to have a point — he’d thrown just 97 pitches, allowed 4 hits while striking out 8, a brilliant counter-punch to the great Verlander.

“I wasn’t quite ready to come out at that moment,” said Lackey with a hint of a smile afterward. “We won the game. That’s all that really matters.”

It’s tempting to wonder what might happen should these two pitchers meet again in a Game 7. But because of the performance of Lackey and those who followed, the sweeter thought is this: This series might not even get to seven. 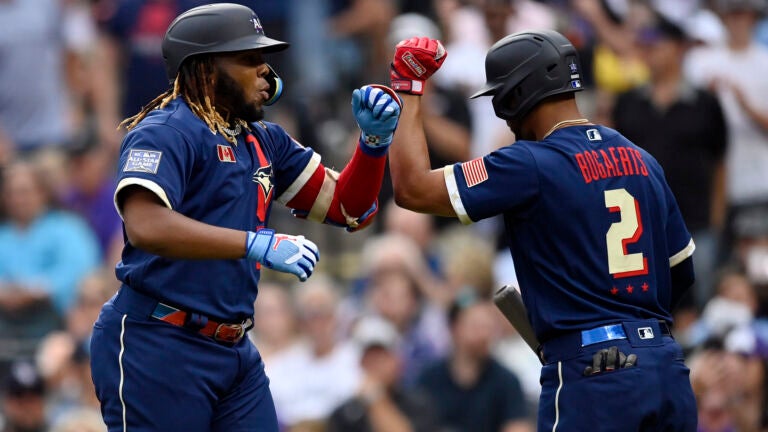