Derek Jeter’s long goodbye — has that Aretha stunt double from The Voice left the field yet? — has tested the limits of even my lifelong sentimentality for baseball. While Bob Costas, the sport’s longtime designated deifyer, poured on so much sugar Thursday night during the living monument’s final game at Yankee Stadium that the MLB Network broadcast should have come with a warning that viewing more than one inning at a time may cause cavities.

Meanwhile, former spring-training invitee Billy Crystal, a young player by Yankees standards, took the opportunity to essentially make the case that he was Jeter’s most beloved double play partner. I bet he’s mad he doesn’t have his own baseball-reference page.

Yeah, it’s been a little much. A lot much. But while those sentimental limits have been tested, they are still intact over here. The teams that do get to play on — thank goodness the Jeteryankees aren’t among them — are appealing, especially those that aren’t particularly familiar to recent playoff baseball.

Sign me up for a Royals-Pirates World Series, please. Or A’s-Pirates. Or Nats-Angels, my World Series pick… last year. Or maybe a ’79 Pirates-Orioles rematch. Or ’85 Royals-Cardinals…

It should be a superb and suspenseful postseason, even by October’s usual standards. But there’s envy for those of us who follow teams that don’t get to play on. It is always a bummer when the Red Sox season ends — even ones that unofficially ended long ago.

Man, what a weird season. What went wrong? Well, you know. It went off the rails so fast that we spent pretty much the entire season rehashing it in real-time. Here’s the synopsized version:

Shane Victorino got hurt and hurt again, Dustin Pedroia got hurt and played through it, Clay Buchholz was an enigmatic aggravation every fifth day, Jackie Bradley Jr. and Xander Bogaerts weren’t exactly the Gold Dust Twins II, Will Middlebrooks remained puzzled by the concept of a slider, Grady Sizemore made a cameo, Jon Lester got low-balled, dominated then got traded, Jake Peavy and Brandon Workman each won a game, Koji Uehara proved mortal…

… and most damningly, the offense scored its fewest runs in a full season since Butch Hobson’s hapless 1992 Red Sox, who were led in all three Triple Crown categories by Tom Brunansky. Bruno hit .266 with 15 homers and 74 RBIs. He did not remind anyone of ’67 Yaz.

As for the really synopsized version: They stink, stank and stunk.

It wasn’t so much a World Series hangover as it was a season of opposites. Everything that went right last year — save for the usual 30/100 from David Ortiz, who somehow managed to remain healthy until the final week — went wrong this season.

The most interesting aspect of this season was the arrival of player who was barely in our baseball consciousness at its beginning.

The 27-year-old Cuban outfielder, signed August 23, got 40 plate appearances in the big leagues after winning championships in two of his three brief stops in the minor leagues.

In those 40 plate appearances, he hit two homers, swiped three bases, put up a .333/.400/.528 slash line, walked three times while whiffing just six, made a couple of nice running/basket catches, and completely justified his $871,000 salary during this brief season.

While we always need to be wary of small samples — Rudy Pemberton’s .512/.556/.780 in 45 PAs in ’96 convinced Dan Duquette he was something better than, you know, Rudy Pemberton — you can gain valuable glimpses of what a player can and can’t do.

It’s a chance to gain first-hand insight on a player whose background has made him something of a mystery. I’m convinced the power is legit, that the 10-15 homer projections will prove conservative and that the 20 pounds of muscle he has gained will enhance his all-around production.

I think Castillo is going to be an adventure — in an entertaining way — on the bases. I saw him over-slide the bag twice in a matter of days. And he plays the outfield with a graceful nonchalance that will be endearing right up until he drops one.

And based on this tiny sample, well, hell, I’m convinced: I get the popular Ron Gant comp, and think he’s going to justify the entire $72.5 million of it over the next seven years.

Gotta end the season with any optimism we can find, right?

As for those still lucky and good enough to be playing:

Go Pirates. Or Royals. Or A’s.

Since we learned long ago that a Red Sox repeat wasn’t happening, the least we can wish for is a worthy successor while dreaming on what next spring might bring.

Say, while we’re at it, kinda liked watching this Betts kid too… 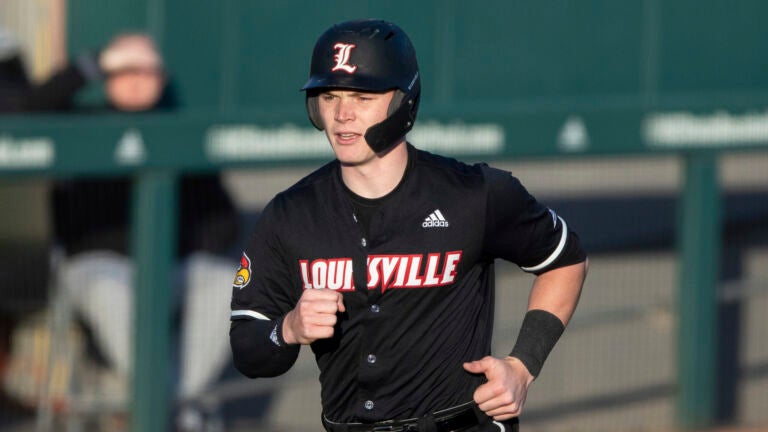 The Red Sox have the No. 4 pick in the draft. Here are 10 prospects you should know.