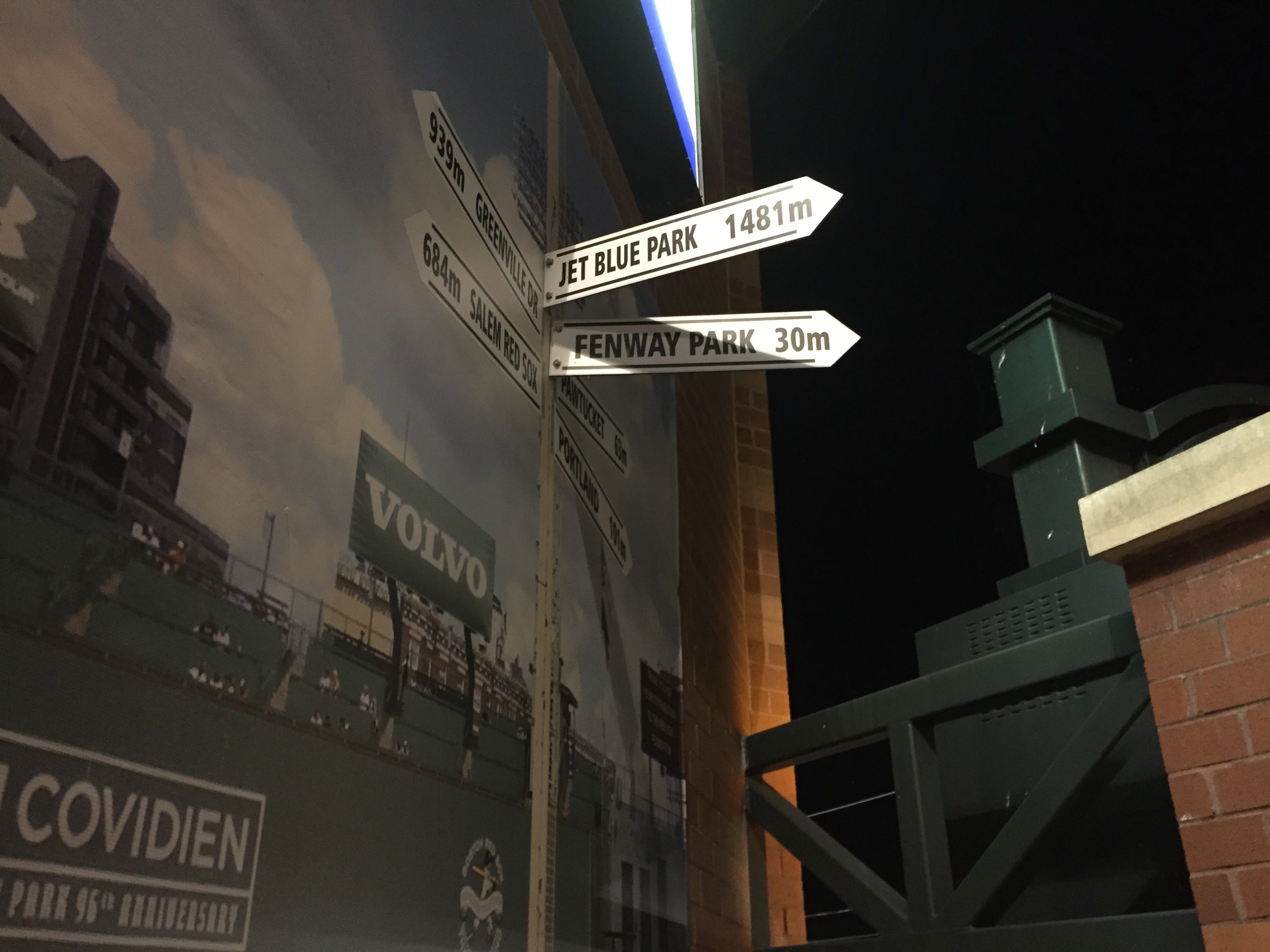 The Lowell Spinners, the first step on the minor league ladder to Fenway Park.

LOWELL — If you happened to miss Andrew Benintendi on his short stint in town, sorry to say you’ll have to wait until perhaps next summer to catch the Red Sox’ top draft pick without traveling more than a couple hundred miles.

By then, perhaps, Benintendi will have already made the leap to the Double-A Portland Sea Dogs, but his time with the Single-A short-season Lowell Spinners lasted only 35 games in which the 21-year-old outfielder hit .290 with seven home runs and 15 runs batted in, all to the tune of a .948 OPS. It’s a bat that didn’t quit upon his promotion to full-season Single-A Greenville in mid-August.

Benintendi has only played in two games for the Drive, but has already made as much of an impression on his new teammates as the one he left in Lowell. Batting cleanup in his second game with Greenville, one night after he went 0-for-4 with a pair of walks in his debut, Benintendi hit a pair of home runs, a three-run shot in the first inning and a 10th-inning blast that helped secure a win over the Greensboro Grasshoppers.

“I feel comfortable right now, just getting more repetitions,’’ Benintendi said earlier this month, prior to his promotion. “It’s definitely a dream come true playing for the Red Sox.’’

The feeling in Greenville is mutual, at least for the time being. The Drive already boast six of Boston’s top 11 prospects in a farm system thought by many to be among the best in baseball. Benintendi joins the likes of second baseman Yoan Moncada, and third basemen Rafael Devers and Michael Chavis. Soxprospects.com ranks Benintendi as the No. 8 prospect in the Boston system. Teammates Devers and Moncada are 1-2, respectively.

But Benintendi’s presence is perhaps a little more special, so to speak, aside from his baseball prowess. As it turns out, he will be the final first-round pick under the Ben Cherington regime, with the Red Sox general manager choosing to step down from his duties with the arrival of new president of baseball operations Dave Dombrowski.

“They [baseball operations staff] came down and I talked to them at the SEC tournament this year,’’ said Benintendi, who was picked with the No. 7 selection in last June’s baseball draft, after hitting .376 with 20 home runs for Arkansas in his final collegiate season. “Before I came up here [Lowell], I went to Boston for a game, so I’ve been able to talk to them a little bit more and get to know them a little bit. It’s been good so far.’’ 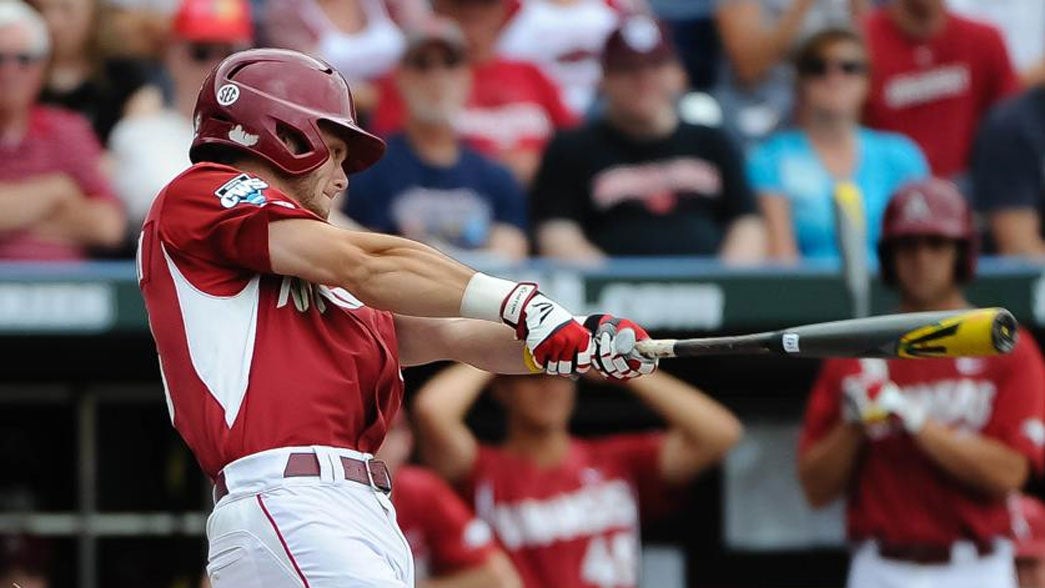 But in just two weeks, Benintendi’s future could have turned about as uncertain as dozens of his colleagues across various rungs of the major league system, welcoming Dombrowski, an executive who has rarely hesitated to trade prospects in order to improve the major league product.Unlike Cherington, he comes in with no attachment to the talent pool, has had no involvement in their scouting or development whatsoever.

With a new order in charge and calling the shots, will Benintendi indeed ever make it to Portland, never mind Fenway Park?

It’s “Jimmy Buffet Night’’ at LeLacheur Park in Lowell, and the Spinners are wearing special Parrothead jerseys. The first 1,000 fans in attendance also received the parrot/palm tree fashion statements, and are filtering into the game as the soothing (grating?) sounds of Buffet songs echo throughout the ballpark’s sound system. One fan in the left field stands sports a Spinners jersey emblazoned with the name of former Lowell and Boston third baseman Shea Hillenbrand on the back of it. He’s the only one.

In his first at-bat of the evening, Benintendi grounds into a force out against Spenser Watkins, who has already had a fairly impressive beginning to the short season of the New York-Penn League. The Connecticut Tigers righty, who made only two starts last season at Single-A Michigan, is 4-3, but with a 2.61 ERA for the Detroit affiliate after being plucked out of Western Oregon in the 30th round of last June’s draft. The “Margaritaville’’ vibe at LeLacheur on this night has to present something of a foreign atmosphere for the Tigers too, seeing as the Nutmeg State isn’t exactly a hotbed of Tigers pride. 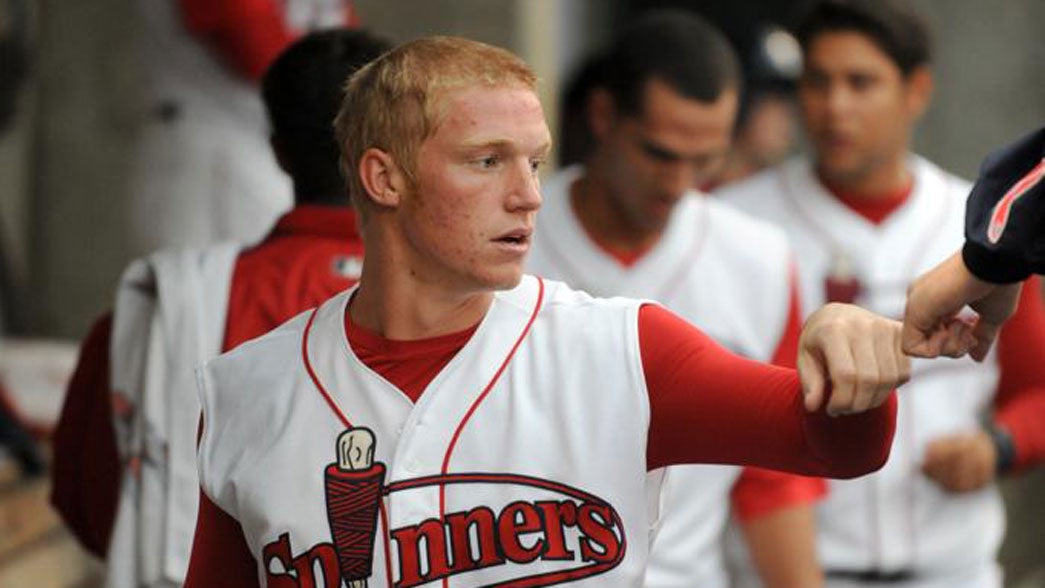 Ryan Westmoreland was a shining presence with the Lowell Spinners in 2009, when he hit .296 with seven home runs.

“Let’s put it this way, I was in Norwich, Conn. for five years and nobody ever came to a game,’’ said former Red Sox pitcher Bob Stanley, a former pitching coach for the Connecticut Defenders, the former name of the Tigers when the franchise was an affiliate of the San Francisco Giants.

It’s true. A little more than a month earlier, the Tigers played the Vermont Lake Monsters on a Monday night, and there were maybe 200 people in the stands at Thomas J. Dodd Memorial Stadium. The park is only 20 years old, but it carries with it the weight of nostalgia, but these days with a sad din more suited for a high school baseball game. Every strikeout brings a mere smattering of applause, and it seems as if there might be more scouts than fans in attendance.

The official number for the night is a mere 1,048. The Tigers are averaging only a little more than 2,000 fans per game, which is among the bottom four in the New York-Penn League. In fact, in Norwich, they don’t eve wait until the seventh-inning stretch to cut off alcohol sales, at Dodd slow foot traffic forces them to do it in the fifth…along with the rest of the food stands.

Dodd really is a dynamite park (the cliche of the stadium rising from the corn fields is too easy, but also, too accurate not to use), but one that is seemingly going ignored with the Tigers’ influx into town. Detroit’s affiliation has only been around for the last five years, but hasn’t exactly caught fire in southeastern Connecticut where the team has hovered around .500 for much of this season. 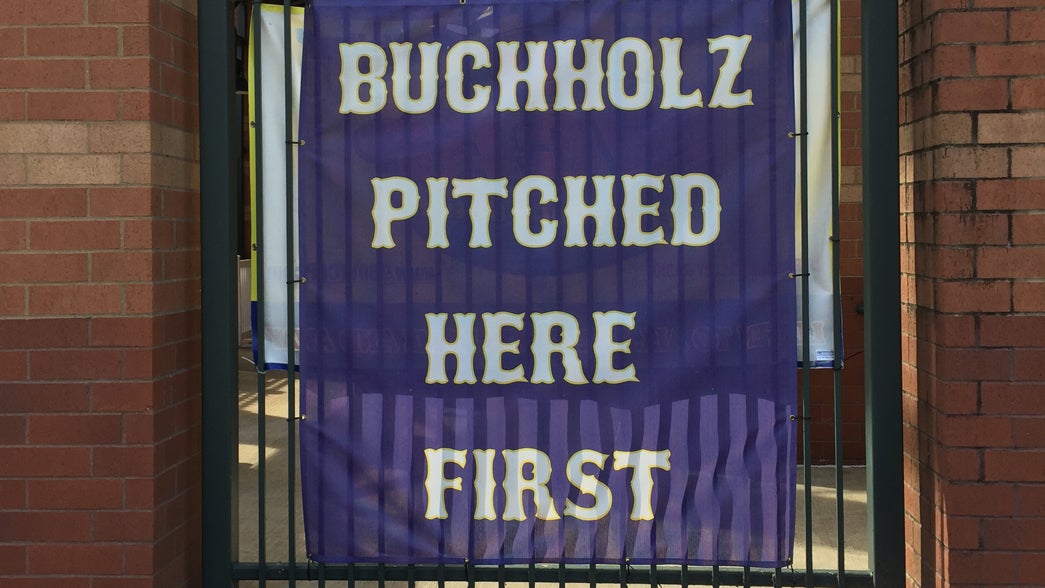 The opposite is the case in Lowell, and has been for some time. Edward A. LeLacheur Park, named after a late state representative, has been a hotbed attraction since opening in 1998. From 1999 until the end of the 2010 season, every Spinners game was a sellout, a remarkable streak for any franchise, let alone a Single-A baseball team featuring mostly kids straight out of the College World Series and the Cape League. Attendance is a healthy 4,187 fans at a park that seats 4,767. The Spinners are currently fifth in the league in attendance with an average of 3,816. The Brooklyn Cyclones, by comparison, welcome an average of 6,206 per game.

But there’s a lot of synergy in the Tigers playing the Spinners, of course, since it’s Dombrowski’s old farm system against the one he’s inheriting with the Boston Red Sox.

In Lowell, at least, the star of the show is Benintendi, who has done nothing but keep his promises high at the next level. But a few other folks have emerged with some potential this season as well. Catcher Austin Rei, a third-round selection back in June, has struggled with a .180 average, as has fourth-rounder Tate Matheny (.167). But outfielder Luis Alexander Basabe, 18, has hit seven home runs with 23 RBI. Twenty-two-year old Matt Kent, a 13th-round selection out of Texas A&M, is 6-1 with a 1.93 ERA in 42 innings of relief.

Dioscar Romero gets the start against the Tigers, and ends up lasting only two innings allowing eight hits and four runs. Benintendi has a rare 0-for-4 night in which he stands four runners on base. The Spinners fall, 7-2.

“We draw a good crowd every game,’’ Benintendi said. “It’s a great ballpark. It’s been fun so far.’’

Benintendi will be gone in little more than a week. So too will be the guy who drafted him.

Change is fluid in Lowell. Players come. Players go. The first rung of the ladder is he shortest step to take for the franchise’s most promising rookies.

The Spinners were never going to be more than a place Benintendi stopped to take his first sip of professionalism. 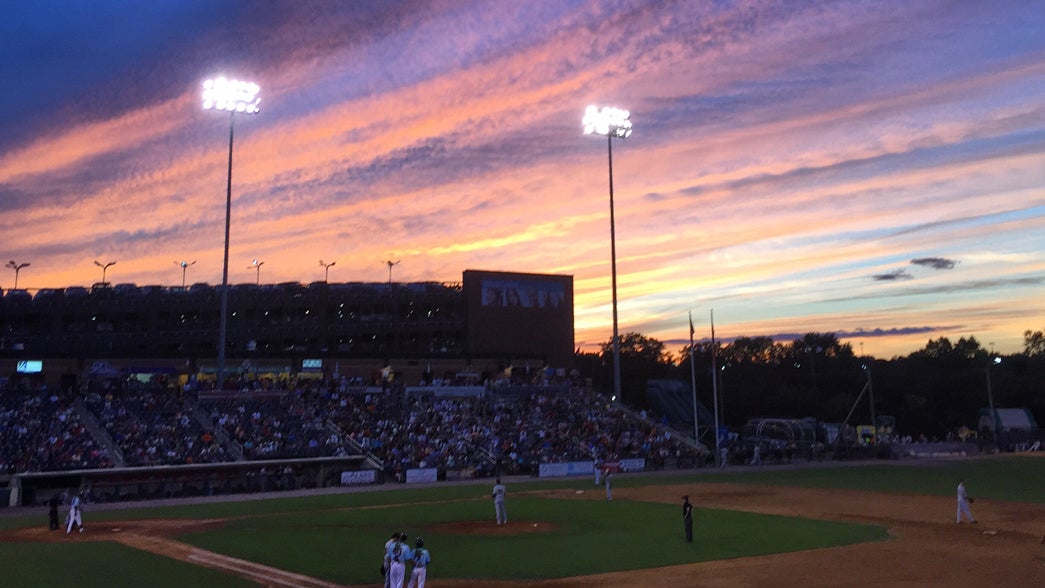 “At low Class A Greenville, the lineup just keeps getting better and better. As the minor league regular season wraps up, the Drive have a strong claim to the title of the most prospect-laden lineup in the minor leagues,’’ Baseball America’s J.J. Cooper wrote recently.

“There are days when the Drive field a top of the lineup that has already earned nearly $45 million in signing bonuses. Now Yoan Moncada’s $31.5 million deal (which cost the Red Sox $63 million when you add in the penalties for exceeding MLB’s international spending limits) is the biggest chunk but includes two former first-round picks (Benintendi and Michael Chavis) and three prominent international signings (Moncada, Rafael Devers and Javier Guerra).’’

Benintendi has done nothing to stop that, hitting .368 in his first handful of games with the Drive, getting on base to the tune of a .480 on-base percentage, and a 1.164 OPS.

“He’s someone who’s always played at the highest level of competition available to him,’’ Cherington said on the day he drafted Benintendi. “Putting that together with his performance, his physical skills, getting to know him as a person as we were able to do this spring, you put it all together and when it came time for our pick at 7, he was the top player on our board. It was obvious who we were taking. We were really excited to take him.’’

Said Dave Van Horn, Benintendi’s former coach at Arkansas, “He’s good at a lot of things. He’s not just a good hitter. He’s got some power. He’s an outstanding baserunner. He has a really good feel on the bases for stealing bases. He’s very fast. He’s an outstanding defender. He’s got a strong arm and it’s accurate. He’s got a lot of tools. I think he’ll move quick through the minor leagues. He just has a lot of baseball instincts. He’s a great player.’’

Just a few weeks ago, Benintendi admitted some difficulty getting used to the wooden bat, which he said doesn’t flex as much as the metal ones he last used in college, at the professional level. That was his biggest adjustment, one he seems to have made seamlessly.

“Playing in the SEC and at Aransas definitely prepared me,’’ he said. “Pitching is about the same as Friday night in the SEC, so, pretty used to it.’’

His pit stop in Lowell is a thing of the past.

Will Dombrowski’s arrival make his time in Boston’s farm system one as well?