One of the coolest things about baseball is that it cannot be scripted. It just happens, and it happens predictably and unfathomably and utterly irresistibly. The real-time drama the game supplies nearly every day over six months – seven, if you’re lucky – is one of the reasons we anticipate its return every spring. But it is not always our friend. When the outcome doesn’t jibe with your rooting interests, baseball’s intrinsic fickleness from day to day can seem one of its cruelest features.

The Red Sox did everything right in advance of Monday’s home opener. The presentation of Fenway Park’s official reopening for 2016 – the F-16 flyover, the player introductions, the usual pomp-and-circumstance – was on point right down to the bunting draped just so along the stands.

But it wasn’t predictable. David Ortiz, the greatest clutch-hitter and arguably the most important player in Red Sox history, was greeted at his final home opener with a heartwarming surprise: His 15-year-old daughter, Alex, sang a lovely rendition of the national anthem. Ortiz’s human side is rarely masked, but this time he wore a look rarely seen during his 14 seasons here. He looked ready to cry with paternal pride.

Then he was joined by some heady and yet familiar company. True icons Bill Russell and Bobby Orr along with should-be-Pro-Football-Hall-of-Famer Ty Law escorted him to the mound to throw out the ceremonial first pitch. The implication was impossible to miss:

Ortiz may be retiring at season’s end, but the man is a legend in his own time. Just look at the company he keeps.

The Red Sox nailed all of the Opening Day details they could control. But the details they could not control came back to nail them. Ortiz walked among legends, but he couldn’t seize the moment like he had so many times before. He could not become the legend of the day.

Instead, the afternoon – at least between the lines – belonged to the chief slugger on the opposition. Reigning MLB home-run king Chris Davis hit a three-run home run off new Red Sox closer Craig Kimbrel in the ninth inning, breaking a 6-6 tie en route to a 9-7 victory for the visitors. The Orioles are suddenly 6-0, while the Red Sox, for whom a fast start is crucial, have dipped to 3-3.

Ortiz did have a chance in the ninth inning to author the ideal ending and cap what had already been a fine day at the plate. In the first inning, he left another dent in the Monster – how many dings in the wall do you think belong to him? – rocketing a hard single to score Mookie Betts as the Red Sox staked David Price to a 3-0 lead.

That might have seemed safe. It was – for one more inning, anyway. The hard-hitting Orioles rallied with a five-run third – including a Davis two-run single and a three-run homer by Mark Trumbo – against the $217 million ace and presumably the Red Sox’ lone trustworthy starter. Price was finished after five innings and 103 pitches. It was the kind of Fenway debut that might have been anticipated for a pitcher in Clay Buchholz’s or Rick Porcello’s class, but not Price. For one start, he pulled a Steve Avery on us. His next turn can’t come soon enough.

With the score tied 6-6 in the seventh, Ortiz then added a two-out double, but was left stranded when Chris Young whiffed after an intentional walk to Hanley Ramirez. Davis’s mammoth blast off Kimbrel deep onto the black center field backdrop – center fielder Jackie Bradley Jr. watched it fly above him like he were witnessing a space-shuttle launch, from great distance and in total awe – put the Orioles ahead by three, 9-6, in the ninth.

But the Sox did not lay down their bats. Mookie Betts homered off Orioles closer Zach Britton to make it 9-7. Dustin Pedroia singled and Xander Bogaerts followed with a walk. That brought Ortiz to the batter’s box and the ring of “Papi” chants to the air. He had a shot at the perfect ending. It was not to be. Ortiz hit a hard grounder to the right of second base. Orioles second baseman Jonathan Schoop dove to corral it, and after a flip and throw, Ortiz was called out on a bang-bang play at first. Replay confirmed that it was indeed a double play.

The oxygen escaped Fenway at that moment. But the Red Sox did have one out remaining and the man expected to succeed Ortiz as the designated hitter next year at the plate. For more than a moment Monday, the often-maligned Hanley Ramirez might have felt like a fan favorite.

In the first inning, the neophyte first baseman made a slick scoop on a low Xander Bogaerts throw, then briefly tipped his cap to the crowd running off the field. In the second, he stretched like Boomer Scott in his heyday to catch a throw a fraction of a second before the runner’s foot hit the bag. And in the sixth, he ran down a popup along the first base line – arguably a better catch than any he made in left field last year – and made a perfect one-hop throw to third to hold the runner on second.

It would have been an enjoyable plot twist had Ramirez ended up winning the game – and with it, winning over the home fans even more. But like Ortiz, he could not muster the hit the Red Sox needed, striking out against Britton to end it.

As the Orioles congregated on the mound to celebrate the victory, the home crowd booed. Baseball is back at Fenway. On Monday, that had to be satisfaction enough. 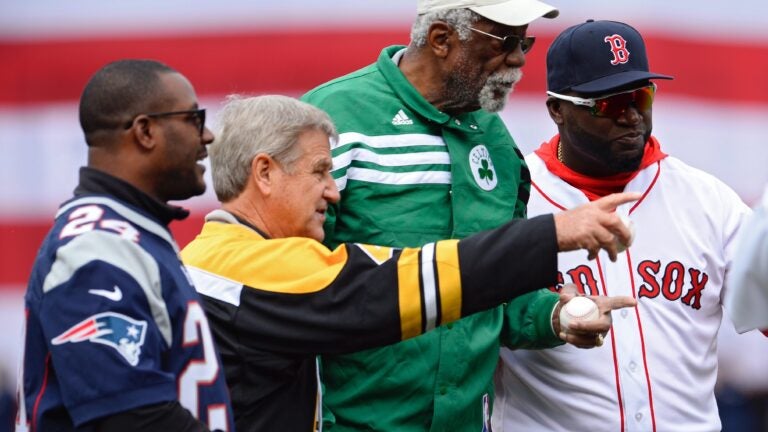