Dave Mellor has dedicated his life to grass.

The longtime Red Sox groundskeeper got his first job in the big leagues 34 years ago, and ever since, he’s been grooming some of America’s most famous ballparks for millions of visitors and viewers.

Mellor has written three books on lawn care, including The Lawn Bible: How to Keep It Green, Groomed, and Growing Every Season of the Year.

“Many of the same challenges we face at Fenway, homeowners are facing, too,” said Mellor.

Boston.com caught up with Mellor and asked him to share his best lawn advice for homeowners in his own words. Here’s what he had to say:

1. There’s a right and wrong way to water

“So many people think, hey it’s hot, when I get home from work I’m gonna water at 5 o’clock and turn it off at 7 or 8 o’clock. The best time to water if you can is from 2 a.m. to 6 or 7 a.m. That way, the water’s there, but your grass isn’t sitting wet all night. If it’s hot and muggy out, it makes it susceptible to disease. If you have an automatic timer, you can do it that way. There are systems that work through satellites that monitor the rain in your area. Or you could set up a hose that has a timer that plugs between the hose and your spigot.

“The rule of thumb is an inch of water a week.”

“Now’s a great time to get the mower in shape; change the oil, clean the blades. Have a backup set of blades, so that when you mow—you hit a stick, a dog’s toy, a rock, a pine cone—you can swap it out. When you put a ding in a blade, it can throw it out of balance, but also, like scissors with your hair, it starts fraying the edge of the grass. So when you mow, it looks green, but later when the sun hits it or the wind, it starts turning brown.” 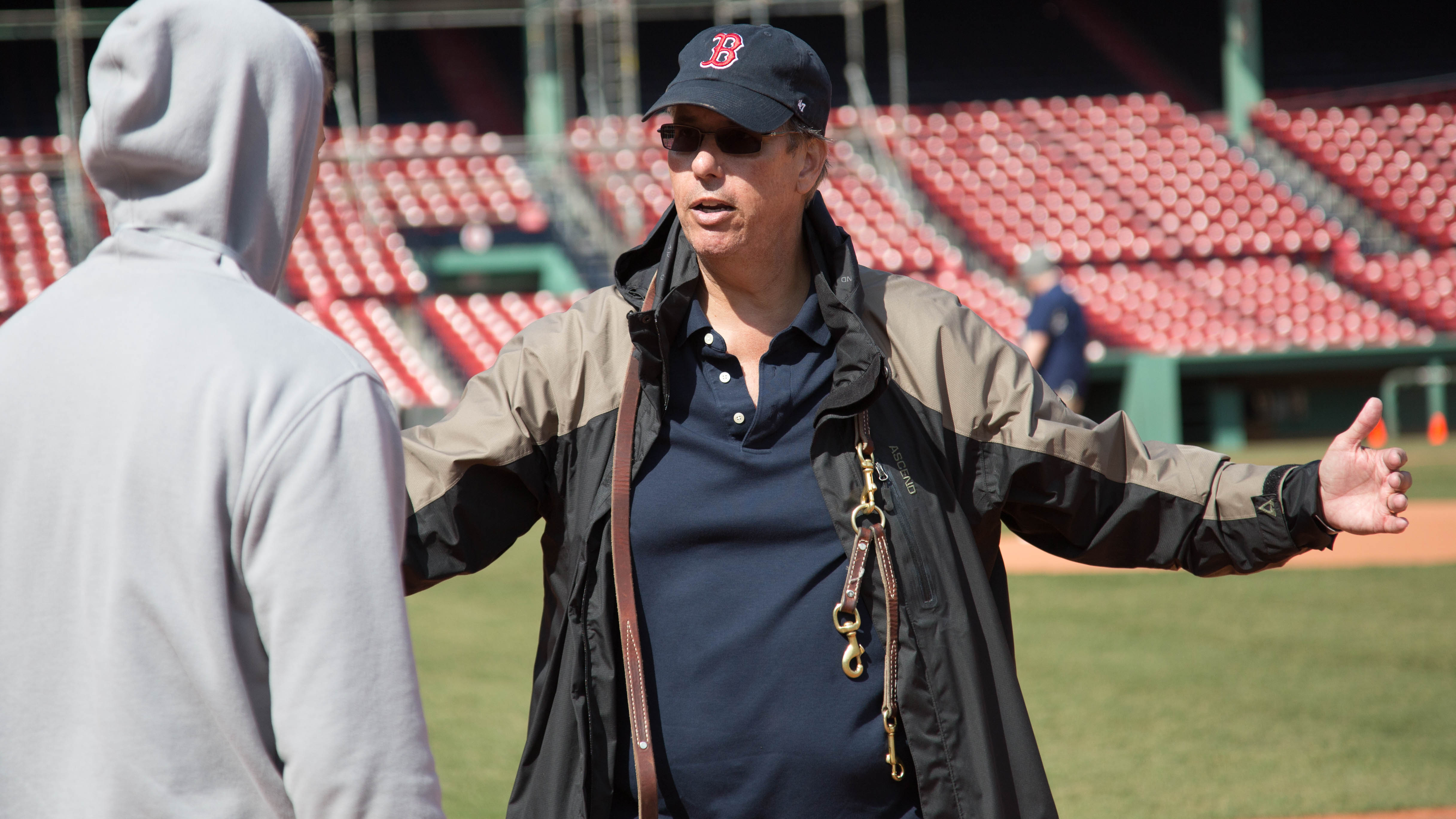 Dave Mellor has been Fenway Park’s groundskeeper since 2001.

“A lot of times, people think if I cut off all my grass in the winter, it’s better. You wanna follow the 1/3 rule. Never cut off more than 1/3 of your grass at a time. So if it’s growing actively, you might have to mow it two or three times, depending on what you’re doing. At Fenway, we mow every day when the team’s in town, so tomorrow it plays just like it did today.”

4. Before you put down fertilizer and grass seed, read the bag

“I think you get what you pay for in quality seed. On a seed label, it’ll tell you percentage of seed germination. It also tells you the date it was made. So older seed will not germinate as well.

“Grass seed mix also has weed seed, it also has crop seed. Weed seed, you don’t want, obviously. If it’s an inexpensive seed mix, crop seeds can be barnyard grasses used for livestock or something.

“People need to be smart with whatever fertilizers they’re using. It’s important to feed your lawn. Just like we need nutrients to be healthy, the grass needs nutrients to be healthy. But you have to be responsible, whether you’re using organic or synthetic. Don’t ever think a little bit’s good, and a lot’s better. Fertilizers are made out of salt. When someone says they burn out their lawn, they’re using a quick release fertilizer that has a lot of salt in it. You wanna make sure you’re following the instructions on your bag, you know what you’re using, and that you’re applying it properly.”

5. Don’t cut your grass too short

“At Fenway, we mow at an inch high for playability. In New England, with the cool season grass, ideally it should be 2 1/2 to 4 inches. By being taller, it shades the roots.” 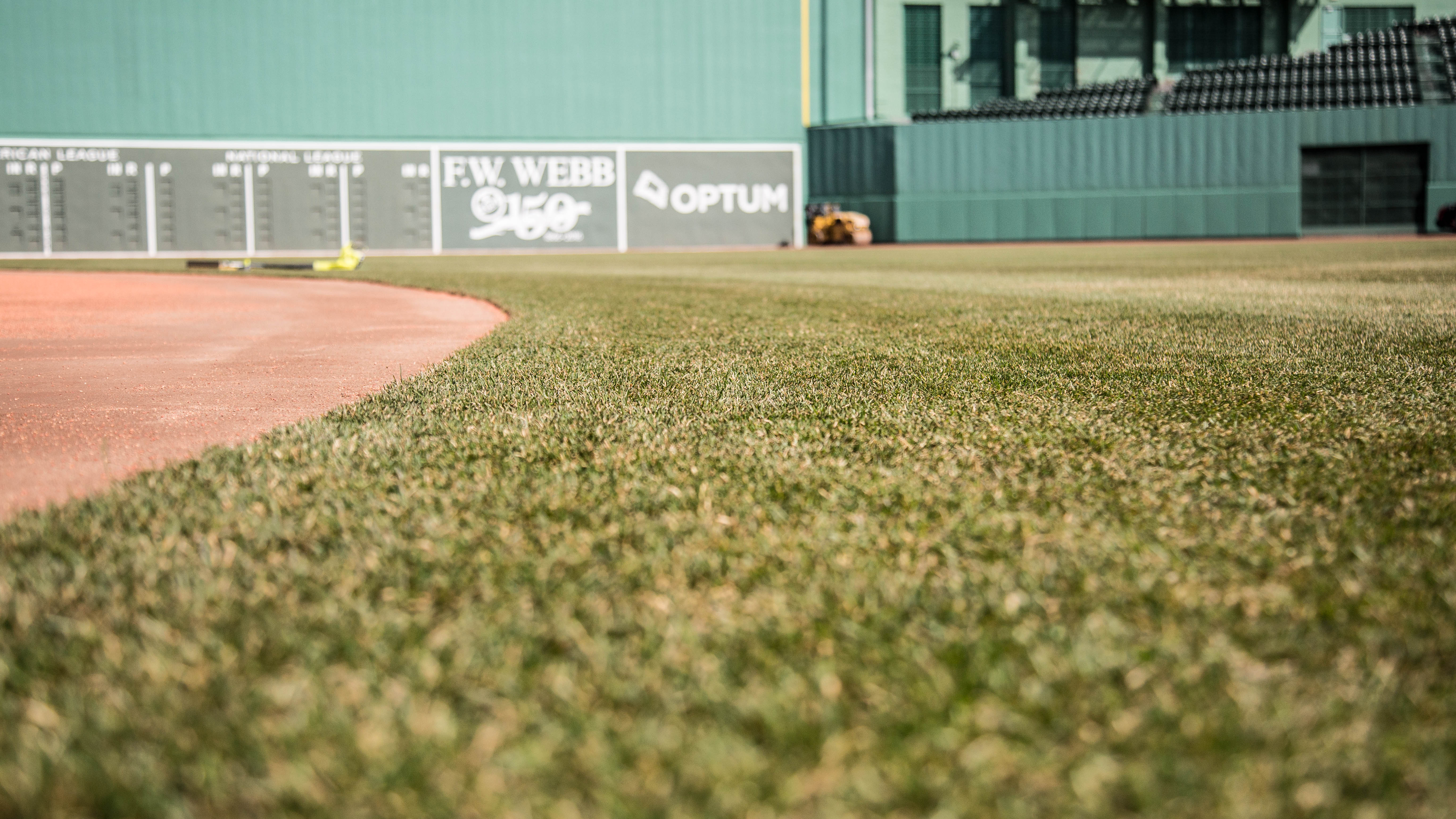 A brand-new Fenway field was beginning to green up on the last day of March.

“Multiple factors can influence the general rules for water and fertilizer, some of which include what the grass site is being used for, the type of root zone grass is being grown in, for example: sand versus clay, root depth of the turf, the turf type, and if the grass is in the sun versus shade—just to name a few.

“At Fenway, the Green Monster absorbs a lot of heat, which is our friend in the spring. That side of the field always greens up before home plate does. And that’s just like a homeowner who’s gonna have reflective heat off the house. That’s something to monitor.

“Your county extension agent can help you out with your soil test, or you can use a private contractor.”

7. Clippings are OK, but not too much

“We rarely bag our clippings in our outfield. Clippings, if you follow that 1/3 rule, those over time will break down and release nitrogen themselves. With leaves, it depends on how much you’re leaving. If you leave too much mulch-y type leaf material there, it’s kind of an environment for moles and mice to live in.”

“When I was in college, I thought, when I get my first lawn, it’s gonna be beautiful—not a weed in it. And then I had two daughters who taught me through their eyes how beautiful dandelions were.

“A weed is classified as an undesirable plant that’s out of place. So a beautiful rose bush right here between us [in center field at Fenway], I would consider a weed because it’s out of place. But if I have a weed in my lawn and my girls were happy, I wouldn’t worry about it. If it was thistle, I would mechanically remove it. You can use boiling water, vinegar, and a weed torch, before you just automatically go broadcast herbicide everywhere.”