J.A. Happ (2-0) gave up one run and four hits in seven-plus innings. Drew Storen got three outs for his first save despite giving up two runs. Toronto gained a split of the four-game series by winning the last two.

With Toronto trailing 1-0 in the eighth, Ezequiel Carrera reached second base against Koji Uehara (0-1) after Rutledge’s throwing error on his infield hit to third. He advanced on Christian Vazquez’s passed ball and scored on Michael Saunders’ groundout.

Kimbrel entered with one out and the bases loaded and struck out Edwin Encarnacion. He walked Troy Tulowitzki on a 3-2 pitch, forcing in the go-ahead run, and Martin singled.

Shaw scored in the ninth on Hanley Ramirez’s two-out, RBI single, and Storen struck out pinch-hitter David Ortiz, who took a 93 mph sinker with a 2-2 count for a called third strike.

With the crowd filing into Fenway Park a couple hours after the morning commute ended and helicopters flying above to track the 120th Boston Marathon, Buchholz threw the first pitch at 11:07 a.m. EDT on a warm morning under bright, sunny skies.

Boston took a 1-0 lead in the second on Rutledge’s double into the right-center gap.

Blue Jays: 1B Chris Colabello said “my head’s completely fine” before the game after getting beaned in Sunday’s win. “I was never woozy.”

Red Sox: Benched 3B Pablo Sandoval, on the 15-day DL with a strained left shoulder, went to see orthopedic surgeon Dr. James Andrews for a second opinion. . Ortiz didn’t start against the left-hander.

The Best Seats at Fenway 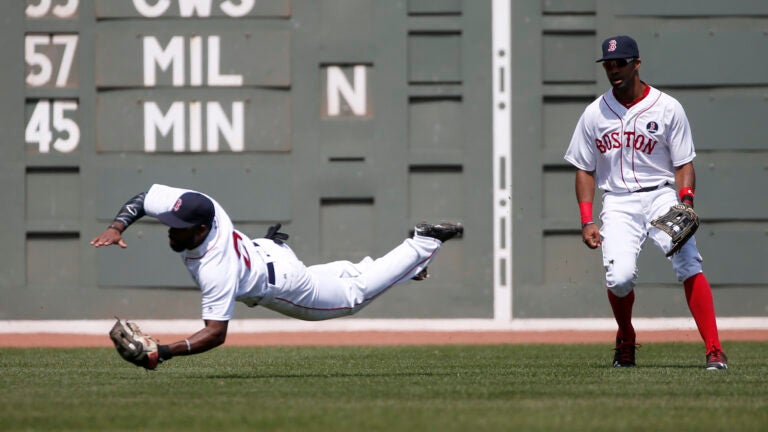