BOSTON (AP) — Toronto first baseman Chris Colabello showed up at his locker the morning after getting beaned by Steven Wright to find a present the Boston pitcher left for him.

“Steven decided that he was going to send over a gift,” Colabello said, moving his clothes and uniform out of the way to show a large bottle of liquor underneath.

“He didn’t have to,” he said Monday as he was getting ready for the annual Patriots’ Day game. “I’m sure that’s not cheap, too.”

On Sunday, Wright hit the infielder on the helmet with an 87 mph fastball, sending him to the ground. He sat on the ground for a while and was checked out by a trainer before getting up and trotting to first base.

“It’s just more of a token of saying I’m sorry,” Wright said. “I didn’t really want it to be a public thing because it was really between me and him.

“I know it’s not a necessary thing. The gift was more for me than it was for him to kind of ease it for myself for what happened.”

Wright was visibly upset on the mound, took off his hat and chatted with Colabello when he made his way to first.

The last thing Colabello expected was a gift.

“He went above and beyond in my eyes,” he said. “It was pretty obvious there was no intent. You could see by his reaction.”

Colabello said the act of a pitcher sending a gift to a player after hitting him “happens more than people know. You build relationships with people.”

Wright said he did it because it scared so many, including Colabello’s parents, who were in the stands. Colabello graduated from high school in Milford, Massachusetts and played college ball at Assumption in Worcester, Mass.

“I felt like it was the least I could do for scaring myself and probably his parents because I know he’s from around here and his parents were here,” Wright said. “I know that’s something I needed to do.”

The right-hander said he’s known Colabello for a few years and likely would have done it if it was someone else. He said he was glad when he heard the infielder was touched.

Colabello sent a thank you note back via his former teammate from last season, David Price.

“I’ve got to shoot a message to Price to tell him to say thank you,” Colabello said before the game.

Red Sox in the Hall of Fame 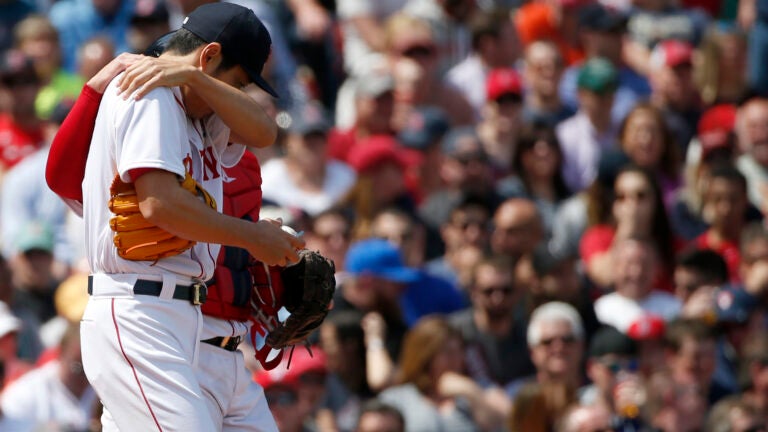