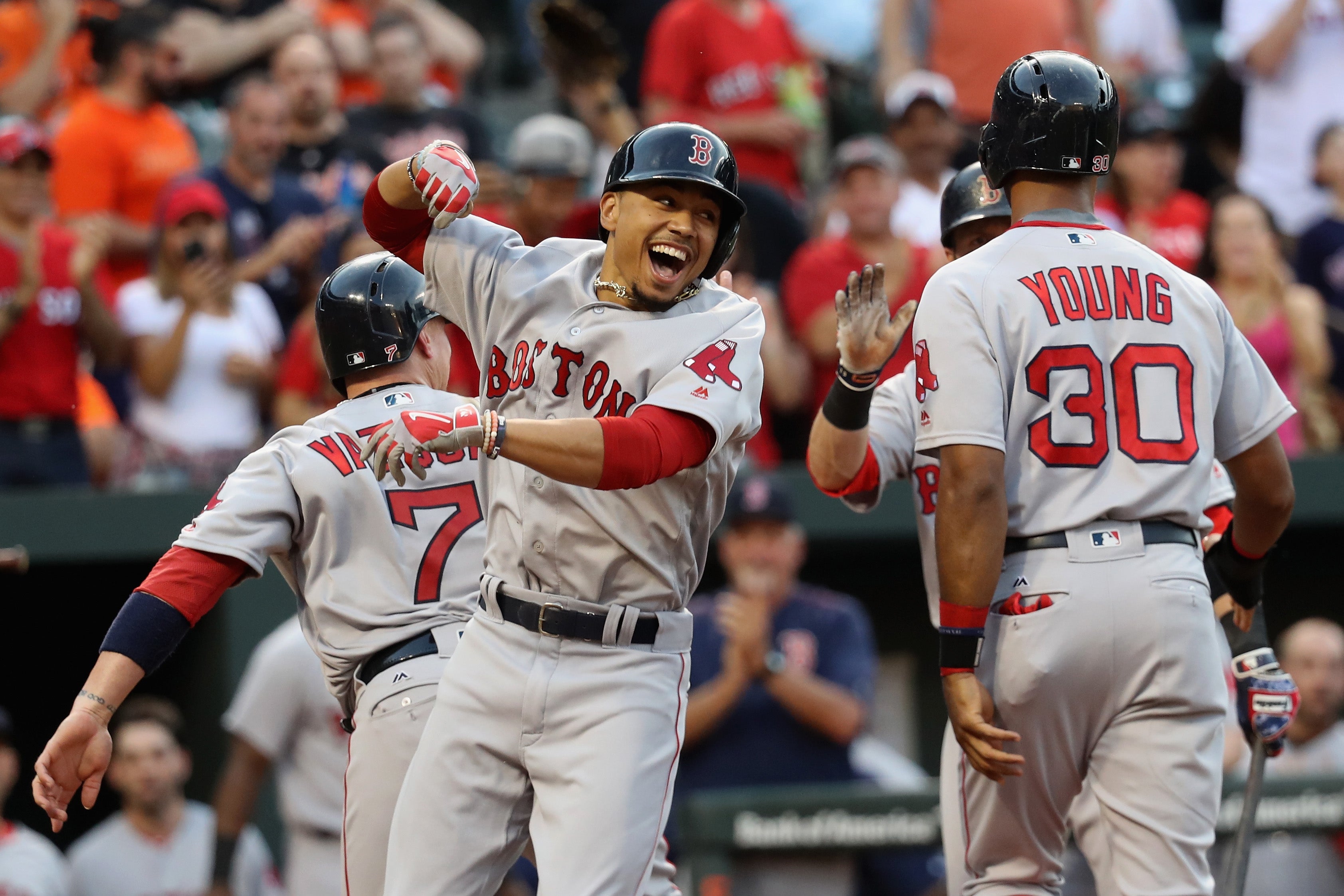 Mookie Betts celebrates after hitting a three-run homer against the Baltimore Orioles in the second inning.

BALTIMORE (AP) — For one glorious night, Mookie Betts discarded his label as leadoff hitter and slipped into the role of slugger.

Betts hit a career-high three homers and drove in five runs, and the Boston Red Sox cruised past the Baltimore Orioles 6-2 on Tuesday night to open a three-game lead in the AL East.

Betts led off the game with a shot to center and added a three-run drive to left in the second inning. After lining out to second base in the fourth, Betts hit a bases-empty homer to right in the seventh.

It just doesn’t get any better than that, does it?

“This is probably the best night,” Betts said. “It’s the first time I’ve ever done that (at any level).”

Batting in the ninth inning with a chance to tie the major league record of four homers in a game, Betts grounded out to second against rookie Ashur Tolliver.

“A home run would have been nice,” he said, “but I was just trying to get another hit.”

Betts’ 12 home runs rank second on the team behind David Ortiz, who has 14.

Red Sox shortstop Xander Bogaerts stretched his career-best hitting streak to 24 games with a single in the seventh inning.

Asked if he was thinking about the streak, Bogaerts said, “Are you kidding me? You live for another day.”

It’s the second-longest in the majors this season behind teammate Jackie Bradley Jr., whose 29-game streak ended last week.

Bradley was placed on the paternity list Tuesday, but the Red Sox banged out 10 hits without him.

“Jackie leaves us today for the birth of his child,” manager John Farrell said. “If he has a boy, I think he ought to name him Mookie after tonight’s outing.”

Betts and Dustin Pedroia opened the game with back-to-back home runs on Kevin Gausman’s second and fifth pitches. In the second inning, Betts followed two walks with a liner that squeezed inside the left-field foul pole for a 5-0 lead.

Betts made it 6-2 in the seventh with a shot off Dylan Bundy.

Boston starter Eduardo Rodriguez (1-0) allowed two runs and six hits in his season debut. The left-hander was activated from the disabled list before the game after being sidelined since March with a right knee injury.

Gausman (0-2) finished strong after the rocky beginning but remains winless after eight starts. The right-hander struck out eight but gave up a career-high tying three home runs for the second straight outing.

“Kind of seemed like the third inning I kind of found it, and by then it was too late,” he said.

The Orioles were tied for first place with Boston on May 22, but now stand a season-high three games out after losing seven of nine — including the first two of this four-game series.

“They’re the best team in baseball right now, so you have to be on your game,” Gausman said. “If you’re not, it’s tough against this team, against this lineup, against their bullpen. Their starters are pitching well too right now, so it kind of seems like everything’s clicking for them right now.”

The tone for this one was established early, when Gausman became the first Baltimore pitcher to allow back-to-back homers to start a game since Rodrigo Lopez in June 2006.

Red Sox: OF Rusney Castillo was recalled from Triple-A Pawtucket to replace Bradley on the roster.

Orioles: Backup C Caleb Joseph was placed on the 15-day DL with a testicular injury after being struck by a foul ball in Monday’s game. C Francisco Pena was recalled from Triple-A Norfolk to play behind Matt Wieters.

Red Sox: Highly touted prospect Sam Travis, a first baseman, has been lost for the season due to a torn left ACL. The injury occurred in a minor league game Sunday, and the Red Sox he will be ready to return by spring training.

Red Sox: RHP Joe Kelly (2-0, 6.30 ERA) seeks his 11th straight victory on Wednesday night in the third game of the series. The streak began last August and includes a win over Baltimore in April.

Orioles: Mike Wright (2-3, 5.05 ERA) gave up four runs in five innings against Boston in April but still picked up his first win of the season.