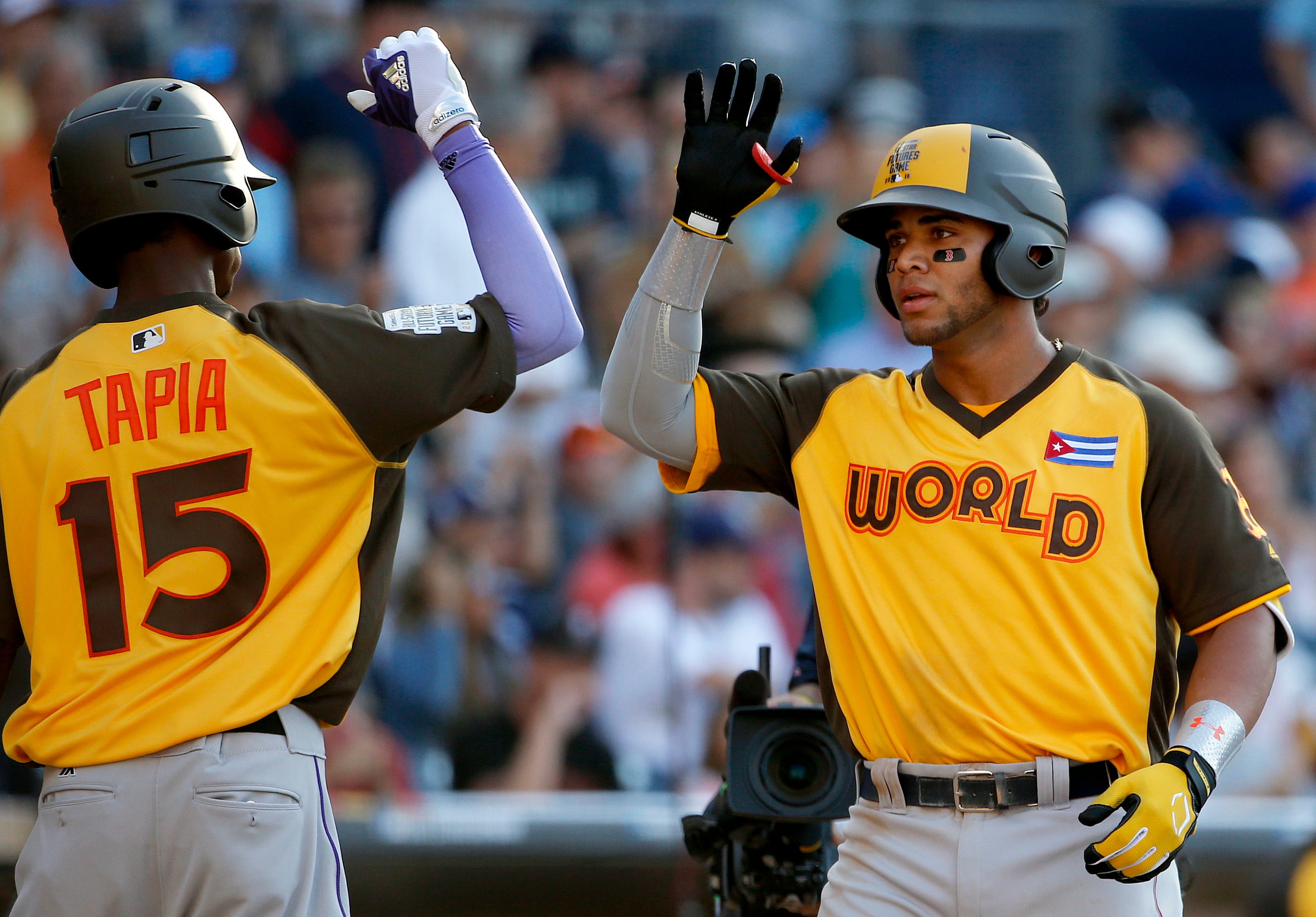 SAN DIEGO (AP) — Shortly after Yoan Moncada hit a go-ahead, two-run home run for the World in the All-Star Futures Game, the Boston Red Sox farmhand found out that the Hall of Fame requested his bat to put on display.

‘‘I feel really excited and really happy that they really want my bat. But it’s really emotional as well,’’ Moncada said through a translator after the World rallied to beat the United States 11-3 on Sunday.

He no doubt was going to share that with his parents in Cuba.

‘‘I hope my parents could watch the game,’’ he said. ‘‘If they could, that would excite me a lot. They are not here with me. I miss them. If they weren’t able to watch the game, anyway I’ll call them tonight. I can’t send them a video, because you are not able to download videos with the Cuban infrastructure.’’

The World team snapped a six-game losing streak in the showcase of top minor league talent.

With Raimel Tapia of the Rockies aboard on an error, Moncada, a Cuban who plays for Double-A Portland, hit a line shot to left off Anthony Banda of the Diamondbacks for a 4-3 lead.

Moncada was named Futures Game MVP. The Red Sox agreed to give Moncada a $31.5 million signing bonus — with a $31.5 million tax imposed by baseball’s labor contract — in March 2015, the highest amount for an international amateur. Cuban authorities allowed him to leave in 2014.

‘‘I am very proud and happy to be here,’’ he said. ‘‘I didn’t imagine I could have such an outstanding performance, but everything went just well. I was the MVP and I dedicate this to my parents.’’

Cubs prospect Eloy Jimenez had a big game as well. His three-run homer to left highlighted the seven-run ninth. He also doubled in the World’s first run, in the sixth, and made a spectacular catch of Dylan Cozens’ long foul ball against a fence near the right-field stands to end the seventh.

Jimenez jumped to make the catch and then ran into the fence, doubling over. His sunglasses flew off.

‘‘I really did not think a lot before attempting that catch,’’ he said. ‘‘First I saw the fly was going wide. ‘I’m not going to catch that,’ I said. But I kept running, and then I just jumped. I hit my leg, but the most important thing was to get that out.’’

Padres farmhand Manuel Margot of the World team reached above the fence in right-center to rob Carson Kelly (Cardinals) of a home run in the sixth.

‘‘I definitely rank it as the best in my career. First impressions are everything, and if the fans have a good first impression of me, hopefully I can keep it up,’’ Margot said. ‘‘It’s little things like that that win ballgames. If the little things aren’t done, then ultimately you’re not going to win the game.’’

‘‘When I look at that lineup in my house in a couple of years,’’ he said, ‘‘there are going to be a lot of guys playing in the All-Star Game, I guarantee you that.’’

For the U.S. team, Chance Sisco homered and Alex Bregman finished a home run shy of the cycle.

Sisco, who plays for the Baltimore Orioles’ Double-A affiliate Bowie, homered to left-center off Francisco Rios of the Blue Jays’ high Class A Dunedin to give the United States a 3-0 lead with one out in the fourth inning. Sisco has one homer in 251 at-bats with Bowie.

Bregman, of Triple-A Fresno in the Houston system, tripled in the first, doubled and scored in the third and singled in the fourth. He fouled out in the seventh and struck out to end the game.

The World closed the gap to 3-2 in the sixth before Josh Naylor (Marlins) was thrown out by David Dahl (Rockies) trying to score the tying run from second on a single by Carlos Asuaje (Padres) to end the inning.

The teams wore jerseys in the mustard and mud color scheme the Padres used in the 1980s.