Rocked by a series of fires in May and a tornado-inducing windstorm in July, it was safe to call 1926 a terrible year in the history of Fenway Park (not even including the team’s abysmal 46-107 record). For three months in the heart of that year’s baseball season, an entire section of seats sat empty: the charred wreckage of a disastrous blaze.

Contemporary observers would’ve had a hard time picturing the beloved “cathedral of baseball” 90 years later, revered as a pillar of longevity and tradition. And even after the burned seats were removed in August of ’26, the left-field bleacher seats weren’t properly reconstructed for almost eight years.

When, in 1934, the ambitious new owner of the Red Sox finally did decide to rebuild the ballpark, the project was nearly derailed by another terrible fire. Yet the renovations went ahead anyway, despite the mounting costs. In the end, it was an indelible chapter in Fenway’s history, since it lead directly to recognizable staples of the modern ballpark, including the Green Monster.

“It burned through the wooden fence on Lansdowne Street”

The actual purpose of the wall initially was to keep fans from getting a free view of the game while walking on Lansdowne Street.

The problem was that much of the ballpark’s original form was wooden, ensuring that it was constantly in danger of a fire.

On May 8, 1926, after fans had extinguished earlier minor fires in the left-field stand, a new blaze began in the bleachers after the day’s game ended (no official cause was ever determined). Stoked by northwesterly winds, it fanned out rapidly across the entire section. A Globe story from May 9, 1926 described the destruction:

In the aftermath of the blaze, very little action was taken to address both the short term issue of the charred seats as well as the larger problem of playing in a high risk wooden ballpark. In fact, another fire briefly broke out during a Red Sox-Yankees game only weeks later. On May 25, the Globe prefaced a game recap with this jarringly nonchalant description:

The woodwork in front of one of the boxes behind the screen in Fenway Park caught fire during the Red Sox-Yankees game today and for a few minutes there was a little excitement, but the blaze was quickly extinguished.

“The wind leaped and wiped out two whole sections of seats”

The ballpark’s luck didn’t improve. A historically powerful storm struck New England on July 19th, wreaking havoc on the entire region. Tearing through Boston, the storm triggered a tornado to touch down in the Fenway neighborhood “midway between the Boylston Street bridge and the Westland Avenue entrance,” according to a Globe story.

“The wind leaped and wiped out two whole sections of seats, including 500 or 600 chairs,” wrote the Globe account. “These were picked up and tossed bodily into the center of the grandstand, twisted and broken.” 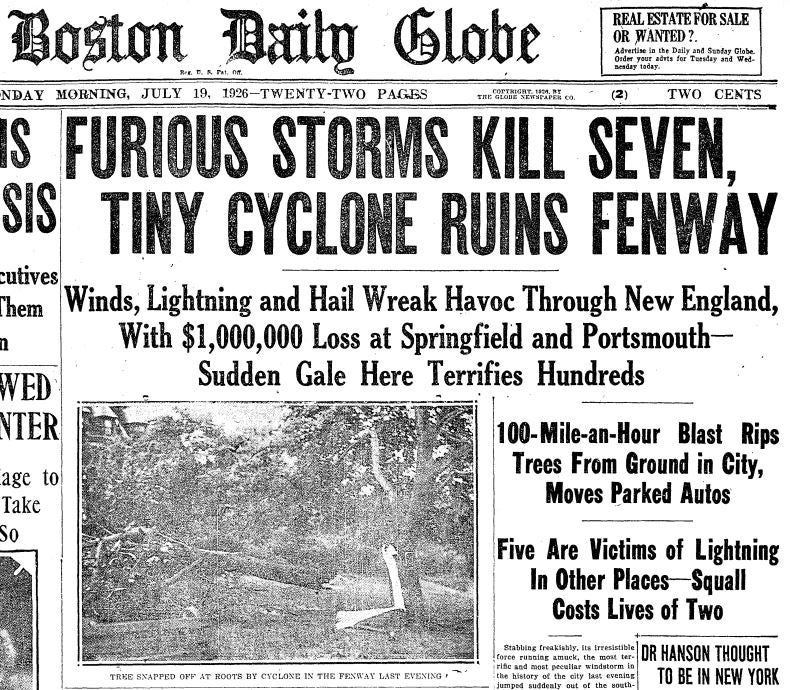 And throughout the summer the burnt third-base bleacher section wasn’t immediately repaired or even removed. Though rendered unusable, the bleacher section sat in ruin for three months until August, when it was finally carted away.

Plans for a new concrete seating area were referenced in newspaper accounts as early as two days after the May 8th fire, but Red Sox President Bob Quinn opted to use insurance money covering the loss to pay team operating expenses instead.

For the next eight seasons, Fenway Park had the look of a dilapidated ballpark past its prime. With no bleacher seats along the left-field line, players were able to sprint into the vacant area to catch fly balls, adding a strange idiosyncrasy for games in the period between 1926-1933.

“What is the use of money unless one does something with it?”

In the grips of the Great Depression, the prospect of salvaging Fenway Park appeared beyond hope during the early 1930s. If money had been scarce in the preceding decade, it was even more so during the gigantic economic downturn.

Into this seemingly hopeless situation stepped Thomas Yawkey, a 30-year-old millionaire. Buying the Red Sox in 1933 for the reported price of $1.2 million, Yawkey immediately recognized the importance of improving his newly purchased team’s rundown home. 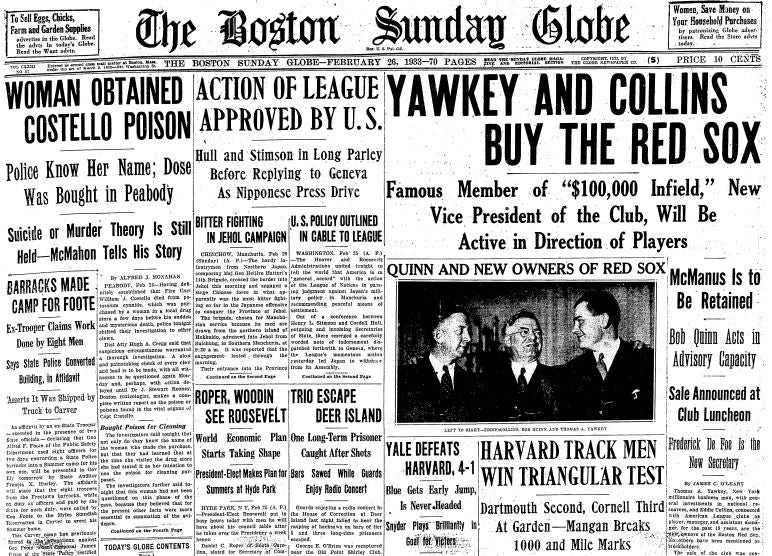 Tom Yawkey bankrolled the acquisition of the Red Sox in February, 1933.

By the end of the ’33 season, Yawkey had already announced major Fenway improvements. Chief among these was the creation of a new left-field wall. Declaring “Duffy’s Cliff Doomed,” a report from September, 1933 gave the first account of what would become the Green Monster:

The center-field stand will be moved back and a concrete wall will be erected, and there will be no more “Duffy” Lewis cliff in the outfield.

Just as construction was moving into high gear, disaster once again struck in the form of a fire.

On January 5, 1934, a fire believed to have been started by a tipped-over “Salamander” heating stove inside the ballpark raged for hours before it was finally brought under control.

It was described in the following day’s Globe as “one of the most disastrous fires in recent Boston history.” And it ruined much of the new construction that had already been completed in Fenway’s outfield. 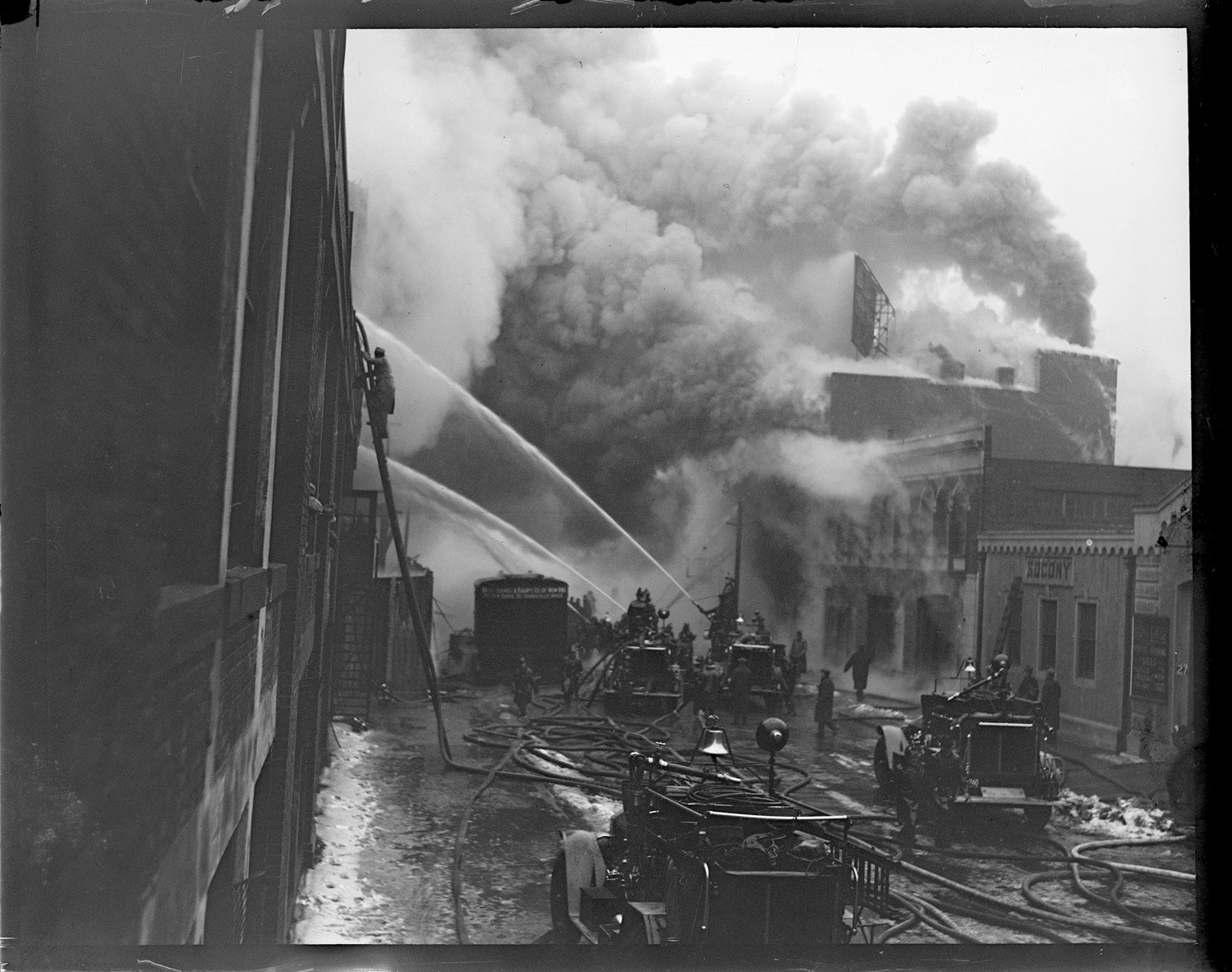 Firefighters and more than 700 construction workers fought the conflagration amid icy conditions.

Unlike the 1926 blaze, the fire in 1934 spread beyond the immediate vicinity of the park.

“The conflagration spread with amazing rapidity, sweeping across Lansdowne Street to gut` completely two brick structures and seriously damage two others,” read the account from January 6th. Miraculously, there were no reported deaths or even serious injuries even though more than 700 construction workers were inside Fenway at the time of the fire.

Tom Yawkey, who was on a hunting trip in South Carolina at the time, quelled concerns about whether he would persevere with the Fenway renovations despite the new damage.

“What is the use of money unless one does something with it?”

At a time when a staggering 21.6 percent of the American labor force was unemployed, the Red Sox couldn’t employ enough people. Spending over a million dollars in total on the renovations, Fenway Park opened on schedule at the start of the 1934 season.

With fitting symmetry, the renovations were done in almost the same period of time (three months) as it had taken to remove the charred wreckage following the fires of 1926. Both three month stretches were notable in Fenway history, though for correspondingly different reasons.

The Monster is born

The Green Monster, as modern fans recognize it, wouldn’t truly exist until 1947 when the advertisements that had previously adorned it were removed (leaving only the trademark green surface). Still, the Monster itself was born following the 1934 renovation.

Made of concrete and covered by tin (which would later be swapped for plastic), the new 37-foot wall replaced its flammable wooden predecessor. And it introduced another tradition recognizable to modern fans: the hand-operated scoreboard. The wall’s foundation has remained largely unchanged, even with the addition of the Monster seats prior to the 2003 season.

Tom Yawkey’s ownership of the Red Sox has been rightfully criticized for his racial discrimination, given that he had a chance to sign both Jackie Robinson and Willie Mays (opting not to for reasons that can only be described as inherently bigoted). Yet Yawkey played an instrumental role in saving one of baseball’s most beloved ballparks, arriving just in time to rebuild the team’s fire-ravaged home.

In that sense, the fires of 1926 and 1934, which nearly destroyed Fenway Park, ultimately helped to trigger its eventual renaissance. And out of that, baseball was given one of its most iconic views: 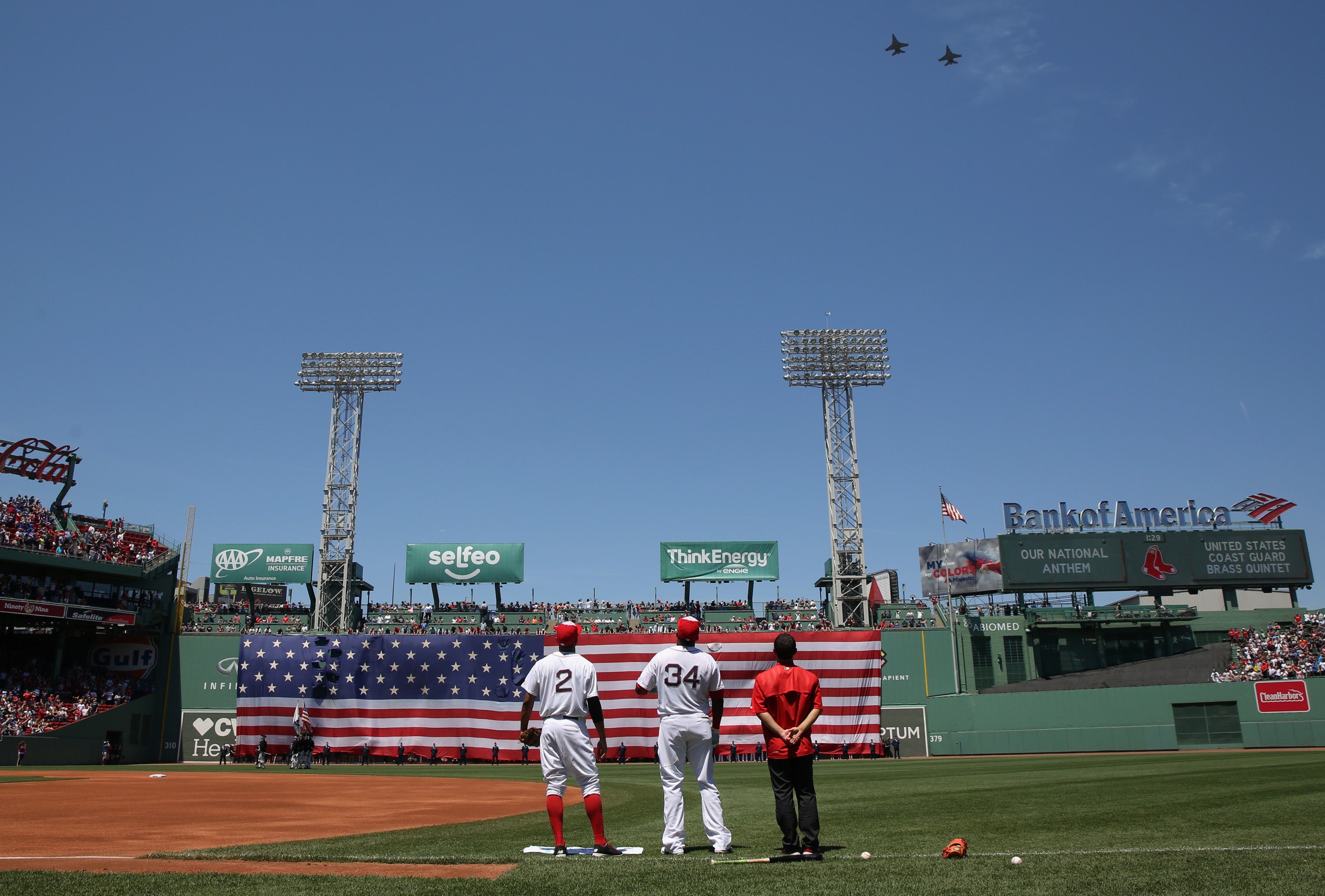 Two jets perform a flyover as a large American flag drapes over the Green Monster as part of 4th of July at Fenway Park. 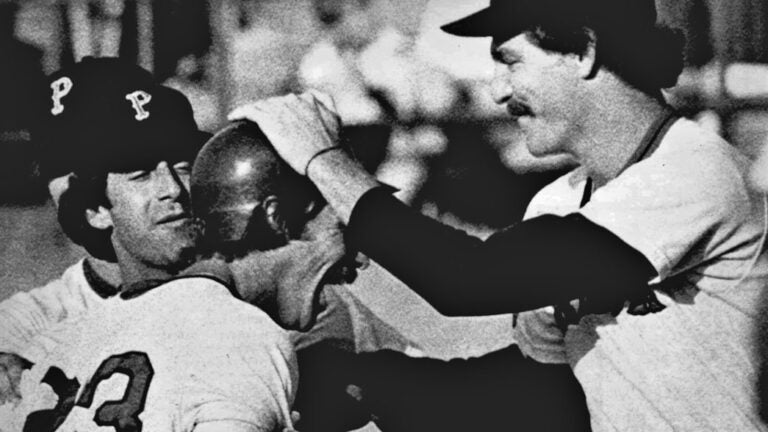