It was only 421 days ago that the Red Sox used their seventh overall selection in the 2015 Major League Baseball draft to select 21-year-old Andrew Benintendi, a kid whom his coach at Arkansas, Dave Van Horn, suggested would move quickly through the minor leagues.

Did he have this sort of rapid ascent in mind?

With Benintendi raking at Double-A Portland and the parent club noting the need for another bat in left field to improve upon Brock Holt-Bryce Brentz, the Red Sox recalled the 22-year-old prospect Monday night in Seattle, following their 2-1 win over the Mariners. He’s the first Red Sox player to skip Triple-A on his way to the big leagues since fellow outfielder Jackie Bradley Jr. scorched his way to the big leagues out of spring training in 2013 by hitting .441.

Bradley hit .189 in 37 regular season games that year and found himself in Pawtucket by mid-July.

So, here comes Benintendi, hitting .295 overall with eight home runs and an .872 OPS for the Sea Dogs, but .368 over his last 10 games, a recent stretch that clearly convinced the Sox brass that he was ready for the next level. Even if he’s skipping one en route and thrust into a tight playoff race with 58 games remaining until October.

‘‘From all reports … he’s ready and we’re going to get a first-hand look at him very soon,’’ Red Sox manager John Farrell said.

The left-handed-hitting Benintendi was hitting only .196 after his first 13 games at Portland, following his promotion from Single-A Salem in mid-May. Can the Red Sox really expect better than that in the majors?

“It came down to, we think he can come up here and contribute to our club and help us win,” Red Sox president of baseball operations Dave Dombrowski said.

He won’t be the first top-10 draft pick from last year’s class to debut in the major leagues this season. Second overall pick Alex Bregman was recently summoned by the Houston Astros and is hitting .036 with eight strikeouts in 28 at-bats after hitting .306 with a .986 OPS between Triple-A Fresno and Double-A Corpus Christi. Pitcher Carson Fulmer, whom the White Sox selected one pick after the Red Sox picked Benintendi, has a 13.50 ERA over 5 1/3 innings pitched thus far with Chicago.

But with the Red Sox’ normally-powerful offense only managing to score 27 runs over their last seven games and Dombrowski unable to improve on the outfield spot at the trading deadline, they’ll become the latest to turn to a first-round draft pick from 2015.

“We thought some of them were good choices, but we also thought the cost for some of those were quite high,” Dombrowski said. “We also weighed that versus what we thought the availability of being ready for Benintendi would be. And our people kept coming up and saying, ‘We think he can play at the big league level and we think he’s ready.’”

If this were a year ago, with the Red Sox plunging toward another last-place finish with nothing to play for, recalling Benintendi, frequently mentioned in the Chris Sale trade rumors which were never a reality over the past week, would make perfect sense. But following Monday’s win, Boston is only a game in back of the Baltimore Orioles in the AL East, tied for second place with the Toronto Blue Jays. Both teams lead the AL wild card race, 1 1/2 games ahead of the surging Detroit Tigers.

Is this the right time to experiment with the future of the franchise?

“It’s really not that unusual,” Dombrowski said. “I’ve really brought a lot of guys up from Double-A. To me, it’s always been — Triple-A is a very important league, but it’s also a situation where if they can hit at the Double-A level, if they can play at the Double-A level, it shows that they have the capabilities to do that. Now it doesn’t mean that they’re ready all the time, there’s always an adjustment period, but I always think that Double-A is a real proving ground.”

It’s not like Benintendi is a prodigy beyond the Red Sox’ grasp at age 22. Mookie Betts was only 21 when he hit .291 over 52 games with the team in 2014. Blake Swihart was 23 when the Red Sox rushed him to the big leagues and watched him hit .274 after some early adjustment struggles. Bradley was 24 when he played in 127 games in 2014, hitting only .198, but flashing a Gold Glove-level defense in center field.

After 60 games in Triple-A, Xander Bogaerts took over third base in 2013 for a team in a pennant chase and hit .250 before hitting .412 in the playoffs, en route to a World Series title.

That’s a progression the Red Sox can only hope for with their new left fielder.

“He’s a well-rounded player,” Dombrowski said. “He’s a good defensive player, he runs the bases well, he has a good arm, we’ve been working him out at left field and he’s been able to play the wall well in Portland there … So it really came down to we think he can come up here and contribute to the club and help us win. And that’s important at this time. Now, he has a strong personality, he has a quality work ethic, good makeup. If he goes through an adjustment period, which could happen, we think he can handle that.”

One year ago, he was in Lowell, playing for the Single-A Spinners. Now, Benintendi is heading to Seattle for a taste of his first action in the major leagues. Farrell said he will start him against right-handed Hisashi Iwakuma on Wednesday.

There will be no Pawtucket. For now.

Here comes Andrew Benintendi. One more kid in the outfield.

“He just has a lot of baseball instincts. He’s a great player.”

The Red Sox are already prepared to find out.

Aly Raisman through the years 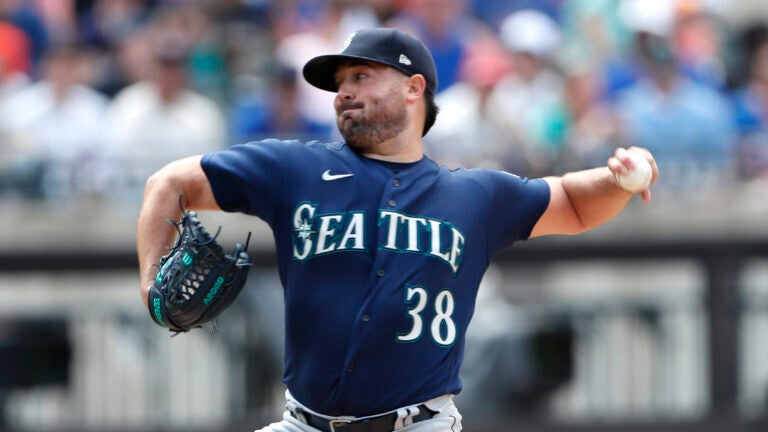