The career of David Ortiz is over, but The Legend of Big Papi will continue to loom large in Boston and beyond. The recently retired Red Sox slugger may not have added the phrase “walk-off” to the baseball vernacular, but his bat gave people plenty of reason to use the term throughout a 20-year career.

With his playing days behind him, there are few better ways to appreciate Ortiz’s legacy than to recall his litany of walk-off heroics. He had 23 walk-off hits in his career, including three in the postseason and three with the Twins before joining the Red Sox.

Here is a look at each of them:

The first walk-off hit of David Ortiz’s career occurred on April 4, 2000, when he was a member of the Twins. Ortiz had had cups of coffee with Minnesota in 1997, 1998 and 1999; but this is the year that truly began his MLB career. In the second game of the season, Minnesota was trailing the Rays, 5-4, entering the ninth inning. The score was tied 5-5 when Ortiz came to the plate with two down. His single to center off Roberto Hernandez drove home Christian Guzman and the Twins won, 6-5.

It was more than two years before Ortiz had another walk-off moment. This next one took place on July 31, 2002: Ortiz singled to right in the bottom of the 10th off Antonio Osuna, driving home Luis Rivas with one out to give Minnesota a 2-1 win over the White Sox.

His third and final walk-off hit for the Twins was the first walk-off homer of his MLB career. On Sept. 25 2002, Ortiz went long off Dave Maurer of the Indians with one down in the bottom of the 12th to give the Twins a 6-5 victory.

Mark the date: On July 26, 2003, David Ortiz’ notched his first walk-off hit as a member of the Red Sox. AND, yes, it was against the Yankees. With the score tied, 4-4, in the bottom of the ninth, Armando Benitez was on the mound for New York and Bill Mueller led off with a fly out. Jeremy Giambi then singled. As Jason Varitek struck out on a 3-2 pitch, Giambi stole second (his first career steal). Johnny Damon was intentionally walked. Manager Grady Little pulled Damian Jackson and, as a pinch-hitter, Ortiz slammed a 97-mph fastball off the Monster and the Sox won, 5-4.

Just about two months after that, on Sept. 23, 2003, Ortiz cracked his first Red Sox walk-off homer. The blast off Kurt Ainsworth leading off the bottom of the 10th, gave Boston a 6-5 win over the Orioles.

It only took until the seventh game of the 2004 season for Ortiz to hit his second Sox walk-off homer. On April 11, this time off another AL East rival, the Toronto Blue Jays. The score was tied, 4-4, in the 12th when Bill Mueller led off with a walk against Aquilino Lopez. Five pitches later, Lopez was watching Ortiz and the Sox celebrate a 6-4 win.

Two months later, on June 11, the Sox were hosting the Dodgers in an Interleague game. The score was tied, 1-1, entering the ninth (earlier in the game, David had hit his 13th homer of the season) and Johnny Damon led off with a walk. Mark Bellhorn followed with a double, putting runners on second and third. On an 0-2 pitch from Tom Martin, Ortiz singled and the Sox had a 2-1 win.

Jump ahead to June 2, 2005, the defending world champions were facing the Baltimore Orioles and Ortiz did something that he had never done before. The O’s were up 4-3 and had their closer B.J. Ryan on the mound. After a pair of singles ahead of him, with two down, Ortiz homered to give the Sox a 6-4 victory. It was Papi’s first walk-off hit when his team was trailing.

With the Sox trailing, 4-3, in the eighth on Sept. 29, 2005, Papi hit his 47th homer of the season to tie the game. The next inning, he untied it, picking up his third walk-off hit of the season. This one was a single to left off Miguel Batista, scoring Johnny Damon to give Boston a 5-4 win over the Blue Jays.

It’s June 11, 2006 and the Sox were hosting the Rangers for a Sunday doubleheader. Texas was holding a 4-2 lead in the ninth frame of the opener. But Rangers reliever Akinori Otsuka had allowed two singles and, with two down, had to face Big Papi. He slammed a three-run, walk-off homer for the 5-4 win.

June 24, 2006 had the Phillies in Boston for an Interleague set. With the score even, 3-3, in the 10th inning, Ortiz hit a two-run homer off ex-Red Sox Tom Gordon to give the Fenway faithful a 5-3 win.

The next walk-off moment came with the Phillies still at Fenway on June 26. This time it was 7-7 in the 12th inning thanks to Kevin Youkilis singling in the tying run earlier in the inning off Clay Condrey. Condrey was still in there with two outs as Ortiz singled home Youk for an 8-7 win. It was Papi’s third walk-off of the month.

With the Angels in town on July 29 and leading 6-3 entering the eighth, David led off the inning with a homer (No. 35), opening the door for a three-run rally. It was still 6-6 in 12th inning when, with two outs and two on, Papi singled to left and drove home the winning run for a 7-6 final. The walk-off hit capped 4-5 day with four RBI.

July wasn’t yet finished on the 31st, and Papi wasn’t quite done with his summer magic either. For the fifth time in two months Ortiz slammed a walk-off hit. Leading the Sox, 8-6, the Indians had Roberto Hernandez on the mound. Alex Cora led off the ninth for Boston with a single before Youkilis walked and Mark Loretta popped out. With two on, Ortiz popped one over the fence for a three-run walk-off homer in a 9-8 win.

After that 2006 barrage, the walk-offs started slowing down for Papi. The next one didn’t come until Sept. 12, 2007 against Alberto Reyes of the Rays, who was attempting to hold a 4-3 lead. Unfortunately for him but fortunately for Boston, Reyes walked Julio Lugo. With one down, David then put the tying and winning runs on the board with a homer to deep right, giving the Sox a 5-4 win.

It was then almost two years before Ortiz had another walk-off hit. On Aug. 26, 2009, with one down in the ninth and the score tied at 2-2, Ortiz took Tony Pena long down the right-field line for his second homer of the game, giving the Red Sox a 3-2 victory over the White Sox.

Eleven months later, on July 31, 2010, the Sox were hosting the Tigers and trailing, 4-2, in the ninth. With one down, Boston had runners on second and third and Detroit chose to intentionally walk Kevin Youkilis, putting the winning run on base so that lefty Phil Coke could face the lefty Ortiz. David, perhaps not taking kindly to that, hit a bases-clearing double to give the Sox a 5-4 win.

It was just about three years before Ortiz had another walk-off hit. Facing the Rangers on June 6, 2013 and with Jonny Gomes and Dustin Pedroia on board and no outs in the ninth inning of a tie game, Ortiz hit a three-run walk-off dinger off Michael Kirkman, the last walk-off homer of Papi’s regular-season career.

On May 14, 2016, during Ortiz’s final season, the Sox found themselves in a 5-5 game with Houston in the 11th inning. Earlier, Ortiz homered and tripled to drive in two runs. With two down, Xander Bogaerts singled. With Ortiz at the plate with a 1-2 count, rookie reliever Michael Feliz threw a wild pitch. Rather than then opting to walk Ortiz, who was hitting around .320, manager A.J. Hinch let the young righty keep facing the veteran slugger. Ortiz drove a changeup to the base of the wall in center field, for a double and a 6-5 walk-off win for the Sox. It was the first time in his career Ortiz had a double, triple, and home run in the same game. It was the 600th double of his career, making Papi, Hank Aaron, and Barry Bonds the only players in baseball history to have 500+ home runs and 600+ doubles. It was the final walk-off hit of David Ortiz’s remarkable career. 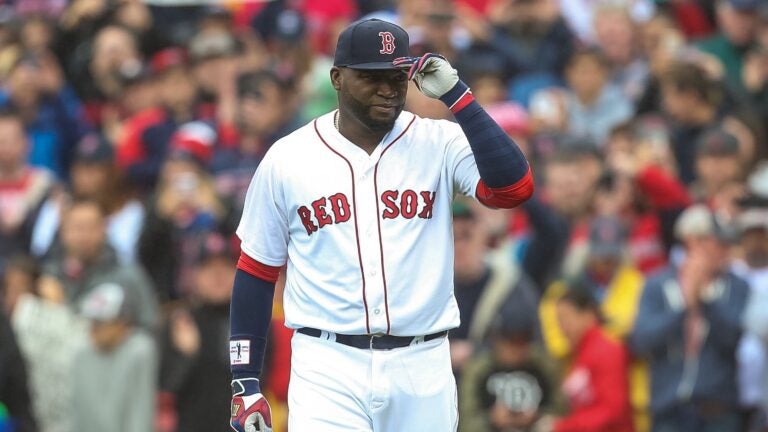 Growing up in the age of David Ortiz