J.D. Martinez agreed to a five-year deal reportedly worth $110 million with the Red Sox last week, but the team did not introduce their new signing until Monday’s press conference.

The delay left some to wonder if there was a problem that would prevent the organization from finalizing the deal, but the hitch was worked out at the negotiating table in time for Martinez to pull on a Red Sox jersey Monday morning.

“It’s been a long process,” Martinez said. “I’m happy just to put everything behind me and be here today and finally go out and play baseball.”

Here’s what you need to know about the slugger’s final contract and the injury concerns that caused the delay:

The Red Sox were concerned about Martinez’s right foot

The 30-year-old, who’s missed 85 games in the past two seasons, spent the first month of last season on the disabled list with a sprained Lisfranc ligament. Martinez was sidelined when he caught his spikes in the dirt making a shoestring catch in March. He was able to walk off the field under his own power, but a CT scan revealed that he’d sprained the ligament in the middle of his right foot. The slugger was confined to wearing a cast and cruising around in a scooter for the remainder of spring training.

The American Academy of Orthopaedic Surgeons cautions that some athletes never return to their pre-injury level after a Lisfranc injury. That was not the case for Martinez. He was out until May 12, but returned to hit 45 home runs and 104 RBIs in 2017.

With a nine-figure contract at stake and Pablo Sandoval’s knee appearing awfully close in the rear-view mirror, the Red Sox made sure to thoroughly examine Martinez’s medical records. He went through one physical at the team’s facilities in Fort Myers, then the organization sent him north on Thursday to undergo additional tests at Massachusetts General Hospital with doctors who weren’t at spring training.

“Anytime you do something like this, you’re very thorough with all of your conversations,” Sox president of baseball operations Dave Dombrowski said, per MassLive. “You’re in a spot where everybody is not in one place for a physical. So J.D. actually did fly to Boston at one time to be checked out there, because we just didn’t have all of the doctors here that we needed. Then it was a matter of being in position for us to complete the language in the contract.”

The Sox must have seen enough cause for concern in the exams to demand different contract provisions, because Martinez’s agent Scott Boras had to work around the clock in Florida to finish the negotiations.

“It was kind of like I had to set up my little office here in Fort Myers,” Boras said. “We had literally 18 hours a day of doctors, language, using our data base historically to answer the needs of the team, the needs of the doctors.”

Boras noted that medical evaluations are subjective and both sides had experts working together to define what the concern was.

Boston changed the language of the contract to protect themselves

The Red Sox were not going to leave such a franchise-altering commitment to chance, so the team inserted what amounts to an insurance policy into the latter stages of the contract.

According to NBC Sports Boston’s Evan Drellich, Boston can opt out of the deal after the third or fourth year if Martinez suffers another Lisfranc injury and misses significant game time. The five-year, $110 million price tag has not changed, but Martinez was also given more flexibility in the revised contract. He can now opt out after the fourth year, in addition to after Year 2 or Year 3.

Despite the four months of offseason negotiations followed by an extra week of protracted medical exams, Martinez said that he never worried that the move to Boston would fall apart.

“I kind of knew that it was really, like they said, being thorough, going through everything,” he said. “Crossing-all-the-t’s and dotting-all-the-i’s-type deal. I never once worried about it.”

What the new deal means for Martinez and the Red Sox

If Martinez uses the friendly confines of Fenway Park to play exceptionally well in a Red Sox uniform, he can choose to opt out of the deal. If he catches his spikes in the dirt again, the Red Sox can trigger their mutual option after the third or fourth year and lift themselves off the hook for millions of dollars at the end of his contract. 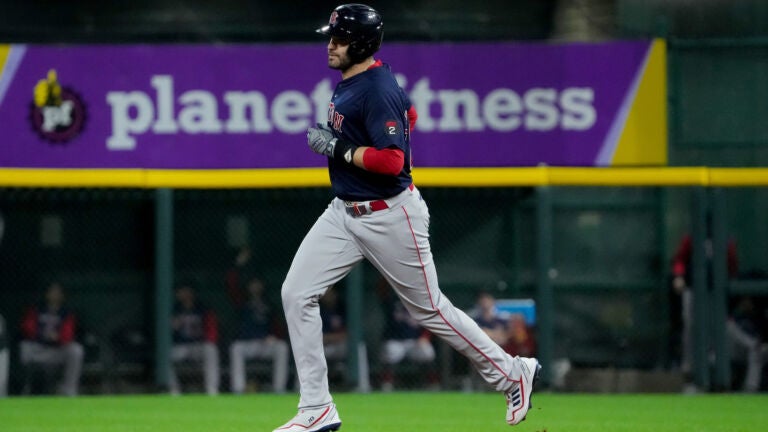