BOSTON (AP) — The fuse has officially been lit in the newest chapter of the ramped-up Yankees-Red Sox rivalry.

Zim vs. Pedro. A-Rod vs. Varitek. Munson vs. Fisk.

Benches clear, punches thrown in Yankees-Red Sox after Tyler Austin is hit by a pitch from Joe Kelly. pic.twitter.com/wvqoak8QMV

In a matchup between clubs that have long clashed, Austin rushed the mound after being hit by a pitch from the Red Sox reliever, triggering a bench-clearing brawl Wednesday night as New York ended Boston’s nine-game winning streak with a 10-7 victory.

‘‘Red Sox-Yankees, man, that’s what everybody wants,’’ Boston starter David Price said. ‘‘And that’s what they got.’’

Austin slid spikes-first into shortstop Brock Holt at second base in the third inning. No surprise, the sides saw it differently.

‘‘Two competitive teams going at it and stuff happens,’’ Yankees general manager Brian Cashman said. ‘‘But sometimes stuff shouldn’t happen and there was no reason for fisticuffs to have to happen based on that slide at second base.’’

Red Sox vs. YankeesRead the story and watch the video: http://bos.gl/r0y1Cmj

Gary Sanchez hit two home runs in a game that twice saw the benches empty and a fight that produced four ejections.

And no telling what might happen in the series finale Thursday night at Fenway Park.

‘‘I think it’s probably over with,’’ Yankees manager Aaron Boone said. ‘‘Hopefully put this to bed.’’

A day after the Red Sox romped 14-1, the benches cleared briefly in the third after Austin’s spikes clipped Holt’s leg on a slide into second base. Holt took issue with the contact and they exchanged words before being separated. 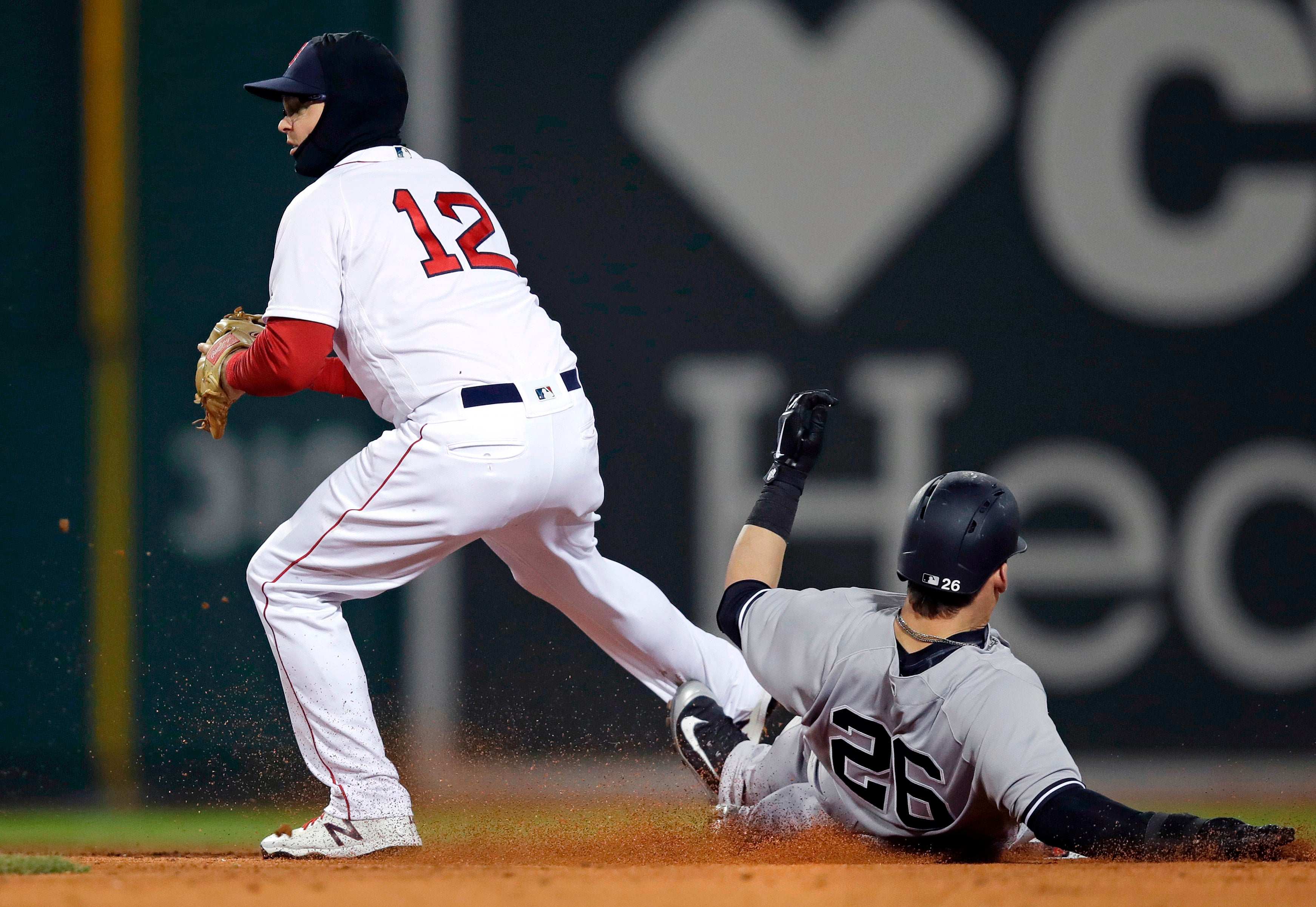 ‘‘I probably said something I shouldn’t have to start the whole thing, so I’m sorry for that,’’ Holt said. ‘‘But I just wanted him to know that it was a bad slide, and I think everyone on the field knows that it was, and I think he knows that now, too.’’

Said Austin: ‘‘I thought there was absolutely nothing wrong with that slide. I had no thought that they were going to throw at me.’’

With the Yankees leading 10-6 in the seventh, Kelly nearly hit Austin with an 0-1 pitch, then two pitches later, caught him on the side with a 98 mph heater. Austin slammed his bat on the plate, threw it down and took four steps toward the mound while hollering. Kelly waved Austin at him, and things quickly got out of hand.

Kelly hit Austin a couple of times, and the Yankees designated hitter wound up with a swollen lip.

The scuffle spilled across the field before it broke up in front of the Boston dugout on the first base side, with Yankees sluggers Aaron Judge and Giancarlo Stanton pushing the pile. Yankees hitting coach Marcus Thames used both hands to shove Austin all the way across the infield toward the New York dugout.

Kelly had visible red marks on his neck when he spoke to reporters after the game.

This was the second bench-clearing brawl of the day in the majors. Colorado star Nolan Arenado charged the mound after San Diego’s Luis Perdomo threw a pitch behind him.

Nolan Arenado charges the mound after a pitch is thrown behind him. Benches clear in Colorado. pic.twitter.com/vKfMTNU5c1

‘‘It made me wonder, too, if they were in their clubhouse watching the Padre-Rockie brawl and planted the seed for them and led them to think that that’s why they should do,’’ Cashman said.

New York and Boston have a history of furious fights.

After Roger Clemens threw a pitch under Manny Ramirez’s chin during the 2003 AL Championship Series, Yankees bench coach Don Zimmer charged Pedro Martinez, who hit Karim Garcia with a pitch earlier. Martinez picked up Zimmer and threw him to the ground.

A year later, Boston’s Bronson Arroyo hit Alex Rodriguez with a pitch, A-Rod shouted at the pitcher, and Red Sox catcher Jason Varitek punched Rodriguez in the face, setting off a scuffle.

‘‘The only thing I would had done different than Joe Kelly tonight, is I would’ve hit Tyler Austin at his previous at bat. Other than that, Kelly executed perfectly,’’ Martinez tweeted.

‘‘Sliding with the cleats up is a no-no in baseball. That means fight fight fight!’’ he tweeted.

The only thing I would had done different than Joe Kelly tonight, is I would’ve hit Tyler Austin at his previous at bat. Other than that, Kelly executed perfectly #YankeesvsRedSox

Sliding with the cleats up is a no-no in baseball. That means fight fight fight! #YankeesvsRedSox

Before the melee, there was some baseball.

The Yankees scored four runs off Price (1-1) in the first inning before the lefty ace exited the game with a tingling sensation in his pitching hand. Price was shaking his hand during the inning.

Aroldis Chapman gave up two hits and a run on a wild pitch in the ninth, but got three outs to end the game.

Sanchez drove in four runs and Stanton had three hits and three RBIs.

Yankees: OF Aaron Hicks (right intercostal strain), was 1 for 3 with a double in his second rehab start for Triple-A Scranton/Wilkes-Barre. LJ Mazzilli was 1 for 4, a day after he was acquired from the Mets organization. Boone said all went well in Hicks’ three at-bats. He said if reports are the same following a third scheduled start Wednesday, Hicks may rejoin the team Thursday.

Along with its win streak, Boston’s errorless streak to begin the season also ended when catcher Christian Vazquez’s attempt to stop Brett Gardner from stealing second skipped into center field. Gardner advanced to third and later scored an RBI single by Stanton.

Red Sox committed no errors in their first 10 games, the franchise’s longest streak to begin any season. No other team since at least 1913 has begun a season with streak of 10 or more errorless games.

Red Sox: RHP Rick Porcello (2-0, 2.84 ERA) has won each of his two starts this season. He has allowed two earned runs or fewer over six-plus innings pitched in each of his six career starts against New York at Fenway.