The foggy forecast on Mookie Betts’s return from a left abdominal strain didn’t get any more clear Sunday.

Betts, who was eligible to come off the disabled list Friday, once again took swings in the indoor cage during the Red Sox’ 5-2 loss to the White Sox. The Red Sox have been deliberating whether to send him on a minor league rehab assignment, but the decision is still up in the air. Betts will travel with the Red Sox to Baltimore as they begin a 10-game road trip.

“He’s moving well,’’ Red Sox manager Alex Cora said. “There were some pitches that he got to that probably a week ago, no way that he gets to it. He feels good about himself.’’

Betts has missed the past 14 games, the longest absence of his career, and Cora said it’s been a test of the 25-year-old outfielder’s patience.

“We’ve got to trust him,’’ Cora­ said. “We do trust him. It’s not that he’s being overly patient, either. He’s going nuts in here.

“I think it’s the smart thing. He recognizes that just being patient now is going to pay off later on. We need this guy for the long run, not just for a few days or a few weeks. He’s doing everything possible to come back as soon as possible but at the same time being smart about it.’’

Starving for offense most of the weekend, the Sox found themselves in a 2-1 hole in the fifth inning on Sunday when Xander Bogaerts pulled a drastic measure.

He shot a ground ball to the hole on the left side of the infield and tried to beat out a jump throw from White Sox shortstop Tim Anderson by diving headfirst into first base.

The dive didn’t help, and as first base umpire Quinn Wolcott called him out, Bogaerts lay stretched out on the infield dirt.

The headfirst dive is typically frowned upon, but Cora said he was the last person to judge. 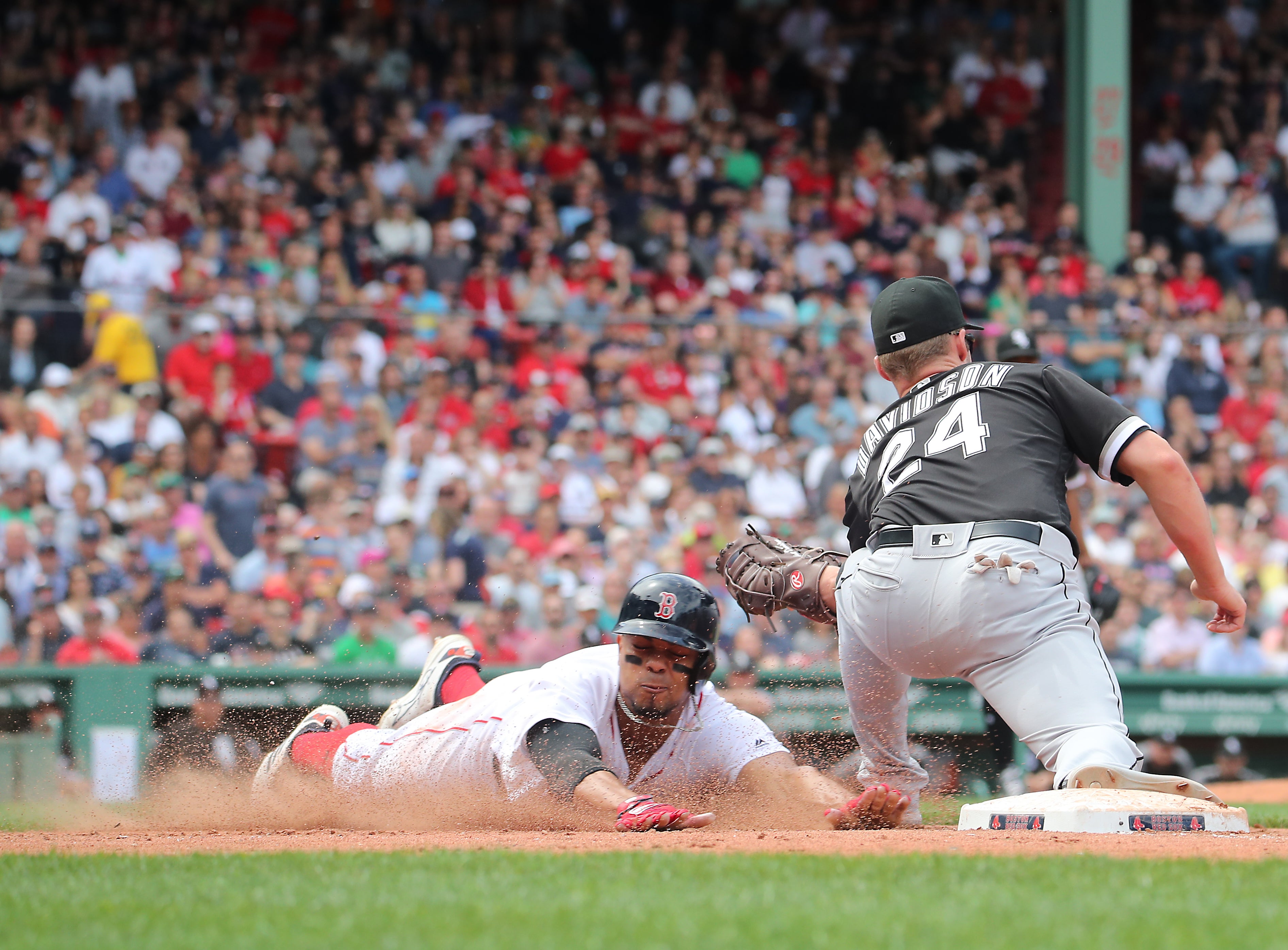 Even if diving into first defies baseball logic, Cora said it’s second-nature for some players. “It’s hard to explain,’’ he said. “Sometimes it’s instincts, avoiding the tag. Sometimes it’s like desperation. You can’t explain it. That last part of the 90 feet, I don’t know, it’s like running in quicksand and you just want to get there. People do it.

Bogaerts went 2 for 12 in the series.

Looking back, when Andrew Benintendi hit first career homer over the Green Monster on May 28, it was more than just a milestone — it was a turning point, Cora said.

“I don’t know what adjustments he’s made, but what I’ve seen is he’s staying on pitches,’’ Cora said. “He’s going to left-center. I do feel that sometimes one swing can sometimes change your approach or your thought. I think him hitting a home run over the Monster helps.

“I think he recognized the way people were attacking him and now he’ll go the other way. He’s seen teams shifting him a little bit more lately, so he’ll take his singles. Then obviously, they’re going to change the way they pitch and they’re going to go to where they want him to go.’’

The Red Sox’ schedule has already taken them on some strange road treks this season. First there was the trip through Anaheim, Oakland, and Toronto in April, then there was the swing from Texas to New York to Toronto in May. Over the next 11 days, they’ll go from Baltimore to Seattle to Minnesota. They’re in the middle of a stretch of 52 games in 55 days. A run of 13 games in 13 days will end next Monday with an off day after their series with the Mariners. “Schedule-wise, we know that the first half was going to be tough,’’ Cora said. “We went through the Anaheim/Oakland/Toronto, Texas/New York/Toronto. So now we’re in the middle of this one. It’s a tough one, but we’re going to be fine. I think we’re getting healthier, we’re pitching better. So we should be OK.’’ . . . According to multiple reports, the Red Sox are set to sign first-round draft choice Triston Casas to a $2,552,800 bonus, which is full slot value for his pick (26th overall). Casas, 18, a corner infielder, starred at American Heritage High School in Florida, hitting .385 with seven home runs in 78 at-bats during his senior season.