LOWELL — Highly touted Red Sox infield prospect Michael Chavis made his return to the diamond Monday, batting third and manning the hot corner for the Single A Lowell Spinners at LeLacheur Park. Chavis was suspended 80 games after testing positive for a performance-enhancing substance in April.

Speaking to the media after going 0 for 3 with a walk and a strikeout, Chavis maintained he never knowingly consumed anything on MLB’s banned substance list.

“When I found out about this, I said, ‘Are you sure you found the right person?’ ’’ Chavis said. “I was like, ‘No way.’ I went through everything that I possibly could have put in my body. I was like a mad scientist. I was like, ‘What if I took Zyrtec combined with this, would it show up with this?’ I was doing everything. I tore apart my closet, I tore apart anything but I don’t have an answer.’’

Chavis, 22, had countless hours to fill over the course of his suspension, so he studied up on the drug — Turinabol — that did him in. In the process, Chavis said he developed a concern for gaps he identified in MLB’s drug-testing policy, though he wou ldn’t elaborate on his findings.

“I’m still trying to figure out what happened,’’ Chavis said. “I learned a hell of a lot more about that metabolite than I ever intended to. I’ve done a lot of research on the drug itself and about MLB testing with this specific drug. There are some holes in what’s going on, potentially.

“I offered myself as a guinea pig. I was like, ‘You can test me every single day for the rest of my career. If there’s an issue, let’s figure it out.’ When I did fail, I wasn’t taking anything.

“I even asked — I was like, ‘Was it possible that UberEats had something?’ I ate a tropical smoothie [and] was like, ‘Maybe they put something in there?’ I called Tropical Smoothie. I called all the places I was eating at. I was asking everybody. I was tearing my life apart. I was looking at the eyedrops I use when my contacts got dry. I was like, ‘I’ll give you everything. I don’t care.’ ’’

In addition to scouring MLB.com during his absence, Chavis took sporadic batting practice in Florida, played “Fortnite’’ during idle hours, and hit the gym regularly.

“If people are going to think that I did it, might as well look like it,’’ joked Chavis.

But Chavis reiterated his fear of needles and distaste for supplements, citing protein and creatine as the ones he consumes.

“If you don’t know me, you have no reason to believe what I said, which I understand,’’ Chavis said. “I can handle that. I was more concerned about the people who knew me as a person. I wanted to make sure that they understood that this wasn’t something I would do.’’

Chavis, the Red Sox’ first-round pick in 2014, laced 31 home runs between High A Salem and Double A Portland in 2017 to establish himself as the top prospect in the Red Sox farm system. But his rise was delayed in April after the Georgia native tested positive for dehydrochlormethyltestosterone, which is also known as Oral Turinabol.

“I was really happy to be out there again and I can’t say enough about this team,’’ said Chavis. “They were really welcoming to me. I tried to keep things simple tonight. I haven’t been in an actual game since Fall League. I definitely felt more comfortable than I anticipated tonight.’’

Chavis was set to report to Portland before learning of his suspension. Monday marked his first game in a Lowell uniform.

On the Red Sox, Chavis said, “From everything that has gone on, I believe that [the Red Sox] have a good idea of who I am as a person. They were supportive.’’

Michael Chavis signed an autograph for a young fan at LeLacheur Park in Lowell. 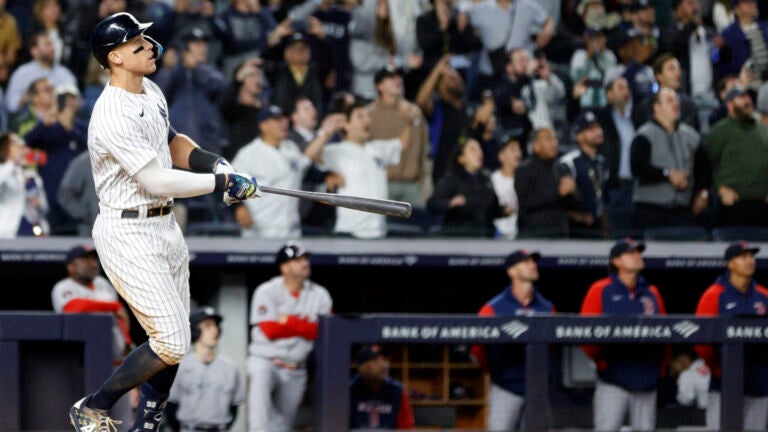 Aaron Judge, for now, the latest in a long line not to make history on Red Sox