NEW YORK (AP) — Brock Holt became the first player to hit for the cycle in a postseason game and the Boston Red Sox routed the New York Yankees 16-1 on Monday night to grab a 2-1 lead in their best-of-five AL Division Series.

Andrew Benintendi lined a three-run double and Holt tripled home two more in a seven-run fourth inning that quickly turned the latest playoff matchup between these longtime rivals into a laugher. Handed a big early lead, Nathan Eovaldi shut down his former team during New York’s most lopsided defeat in 396 postseason games.

Boston battered an ineffective Luis Severino and silenced a charged-up Yankee Stadium crowd that emptied out fast on a night when Red Sox rookie manager Alex Cora made all the right moves. By the ninth, backup catcher Austin Romine was on the mound for New York — he gave up a two-run homer to Holt that completed his cycle.

Game 4 is Tuesday night in the Bronx, where the 108-win Red Sox can put away the wild-card Yankees for good and advance to the AL Championship Series against Houston. Rick Porcello is scheduled to pitch for Boston against CC Sabathia.

Boosted by noisy fans in their homer-friendly ballpark, the Yankees entered 7-0 at home the past two postseasons — against out-of-division opponents. But the Red Sox, frequent visitors of course, were hardly intimidated.

Holt, making his first playoff start this year, opened the fourth with a single off Severino and capped the outburst with a triple to right field. Holt also doubled home a run in the eighth — he finished with five RBIs and four of Boston’s 18 hits.

Eovaldi pitched for the Yankees from 2015-16 before injuring his elbow, which required a second Tommy John surgery. Boston acquired him from Tampa Bay in July and the hard-throwing righty compiled a 1.93 ERA in four starts against New York this season — three with the Red Sox.

Bumped up a day in front of Porcello, he delivered a gem in his first postseason appearance. Eovaldi allowed one run and five hits in seven innings, throwing 72 of 97 pitches for strikes.

Going with Eovaldi was only one of several choices that paid off for Cora.

Looking to play left-handed hitters against Severino, the first-year skipper inserted Holt at second base and Rafael Devers at third. Christian Vazquez started at catcher over Sandy Leon.

Devers singled twice, stole a base, scored two runs and knocked in another. Vazquez’s infield single off Severino’s glove in the second drove in the first run.

Benintendi, who hit .351 with eight doubles and 12 RBIs in 19 games against the Yankees this year, was on base four times and scored twice.

Red Sox: 1B Mitch Moreland sat out after leaving Game 2 when he hurt his right hamstring running the bases. “Mitch is available, but he’s not 100 percent,” Cora said. Steve Pearce played first and had an RBI single in the fourth.

Yankees: CF Aaron Hicks remained out of the lineup after missing Game 2 with tightness in his right hamstring, which forced him from the series opener Friday. New York manager Aaron Boone said Hicks was doing “significantly better,” and sitting him was a much more difficult decision than it was Saturday. Brett Gardner was back in center, but Boone said he wouldn’t hesitate to use Hicks in any role off the bench.

Yankees: The 38-year-old Sabathia (9-7, 3.65) will be on 11 days’ rest when he makes his 23rd postseason start. The big lefty was ejected from his last regular-season outing for hitting Tampa Bay catcher Jesus Sucre with a pitch during a testy game between division rivals on Sept. 27. Sabathia appealed a five-game suspension from Major League Baseball that would not take effect until next season. He said Monday he definitely wants to play in 2019 — even if it’s not for the Yankees. 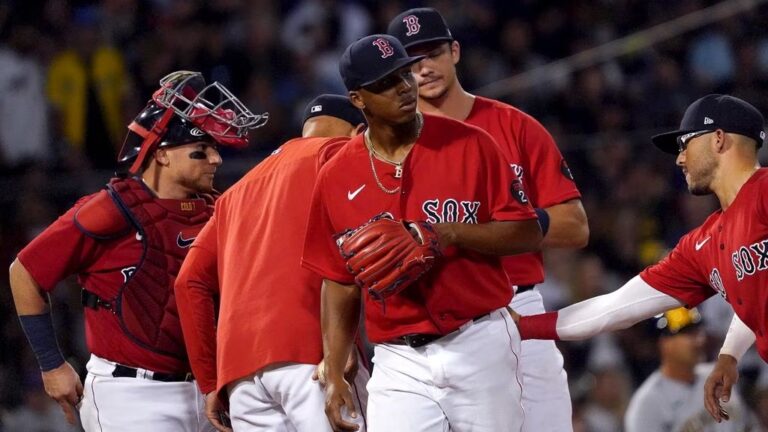