HOUSTON (AP) — Jose Altuve was sure he’d hit a tying home run for the Houston Astros in Game 4 of the AL Championship Series. He thought it was a double, at least, when he watched the ball ricochet back onto the field.

Then, he saw the signal: He was out, and couldn’t believe it.

Altuve’s potential homer was wiped away when umpire Joe West ruled that fans reaching for the ball interfered with Boston right fielder Mookie Betts attempting to make a leaping catch.

Now Houston’s chances to repeat as World Series champions are nearly out of reach after an 8-6 loss Wednesday night that put the Red Sox ahead 3-1 in the best-of-seven matchup.

“I normally don’t get mad at the umpire’s call. That one, I was a little upset,” Altuve said. “All of a sudden, it wasn’t even a double, it was an out. Two runs the game ended up … that make me a little bit more upset.”

“That’s just a tough call right now,” said Houston’s George Springer, who later homered over that same wall. “I understand it’s not easy to make that call. You would like to see a two-run homer be a two-run homer, especially to tie the game.”

West, the crew chief working the right-field line at Minute Maid Park, signaled fan interference after Betts was unable to make a jumping grab. Fans made contact with Betts’ glove, though it wasn’t clear if they had reached over the fence.

The call stood after a replay review that lasted 3 minutes, 13 seconds. Altuve was ruled out and Springer was sent back to first base.

West told a pool reporter the ball had not crossed the top of the wall when “the spectator reached out of the stands and hit him over the playing field and closed his glove.”

Betts, one of the best defenders in the majors, said he had it all the way.

“That was a ball I could catch. I’m 100 percent positive I was going to be able to catch that one,” he said.

“I jumped and went over, reached my hand up, I felt like somebody was kind of pushing my glove out of the way or something,” Betts said.

A fan wearing an orange Astros jersey, who identified himself as Troy Caldwell, insisted he wasn’t reaching out over the yellow line atop the 7-foot-high fence when the ball hit his hand.

“That ball was gone no matter what,” said Caldwell, a lifelong Astros fan from Houston who now lives in Atlanta.

The play came on the same day MLB cleared the Astros of any wrongdoing after a credentialed Houston employee was caught pointing his cellphone into the opposing dugouts during playoff games in Cleveland and Boston.

Astros manager AJ Hinch cracked a joke when asked if there were enough cameras at the ballpark to properly review plays like Altuve’s hit.

“Yeah, earlier we started the day with do we have too many cameras in the park,” Hinch said, smiling. “So, yeah, I wish we had an angle that was perfectly along the fence line that would show. That’s the one camera we don’t have.”

Altuve had both hands on his helmet in disbelief while standing on second base, where he stopped when the play ended. Hinch went out to discuss the situation with West, who had a brief consultation with the rest of the six-man umpire crew before the play was reviewed.

“Jose pays the biggest price because the trajectory of the ball looked like it was going to leave the ballpark. But we assume — and you can assume a lot with Mookie because he’s an incredible athlete — we assume he’s going to make this spectacular catch jumping as high as he can into the crowd,” Hinch said. “Changed that whole inning.”

While Betts didn’t say anything to the fans after the disputed play, Caldwell said he immediately started getting texts that he had cost Altuve and the Astros a home run.

Altuve said he had nothing against Caldwell, and would do the same thing as a fan and try to catch a ball.

“As long as the Astros come back and win this we’ll be all right,” Caldwell said during the game.

They didn’t, and now are facing elimination, 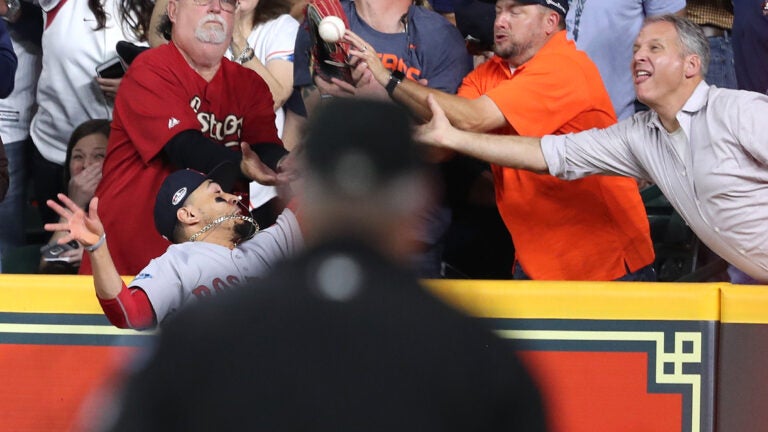