BOSTON (AP) — Chris Sale would rather talk about the ring he can win as a World Series champion instead of the almost certainly nonexistent navel ring that — he maintains with a straight face — scratched him from a start in the last round.

The Red Sox left-hander will belly up to the mound to start Game 1 against Los Angeles on Tuesday night, 10 days after his last outing and nine after he was hospitalized with what the team called a “stomach illness.”

Sale joked — we think — that it was from a piercing gone bad, and he kept up the ruse back in Boston.

“I’m not going to spill all of my secrets,” he said.

Clayton Kershaw is scheduled to start for the Dodgers, giving baseball a matchup of marquee lefties from a pair of iconic franchises at two of the oldest ballparks in the majors.

The Red Sox, who won a franchise-record 108 games and their third straight AL East crown, are going for their fourth title in 14 years; the Dodgers, who lost to the Astros in the Series last year, will try for their first championship since 1988.

“It’s going to be rocking. This place is going to be obviously going crazy,” Sale said. “We’ve all been waiting for this. And our fans, too.”

The 2017 AL Cy Young runner-up — a favorite for this year’s award before arm problems down the stretch — Sale never missed a start through the end of July, when he went on the disabled list with what the team called “mild left shoulder inflammation.”

He came back for one start in August but then shut it down again as the Red Sox, who had a double-digit lead in the AL East, coasted into the playoffs.

After sitting out a month, he threw 26, 42, 73 and 92 pitches in four September starts to rebuild his arm strength for the postseason. He won Game 1 of the AL Division Series against the Yankees and came on in relief in the Game 4 clincher, then got knocked around in the opener of the ALCS against Houston.

During Game 2, the team announced that he had been hospitalized, forcing him to join his teammates late when the series moved to Houston and pushing him back in the rotation from the fifth to the sixth game.

Sale insisted he was prepared to gut it out, but the Red Sox clinched in five, thanks to David Price’s pitching and Rafael Devers’ three-run homer.

“Obviously D.P. and Devers and everybody else had a different way of going about it,” Sale said. “Having these extra few days has been nice to be able to get back on that routine, get a little more normalcy back into it. Getting my strength back … got back to doing some things that made me successful in the past.”

Kershaw is a three-time NL Cy Young winner who has been in the top 5 for the award in each of the last seven years. In 2014, he was the league’s MVP. He said he’s glad to be facing Sale in Boston, where the pitchers won’t be batting.

“Probably wouldn’t have been a good matchup for me,” he said.

Sale said on Monday that he is back to 100 percent, and he deflected questions about the illness that melted even more weight away from his 6-foot-6, 180-pound frame. But his comment about the belly button ring has exploded like the infected wound he is pretending to have.

Brock Holt said he would get a nipple or belly button ring if the Red Sox win it all; second baseman Ian Kinsler said it might become a trend.

“I’ll get any type of ring if we do it,” Kinsler said. “If we can get four wins we might all be walking around with nipple rings or belly button rings, whatever it may be.”

Sale, wearing what appeared to be the same gray T-shirt he has sported all through the postseason, said he wasn’t surprised.

He was joking again. 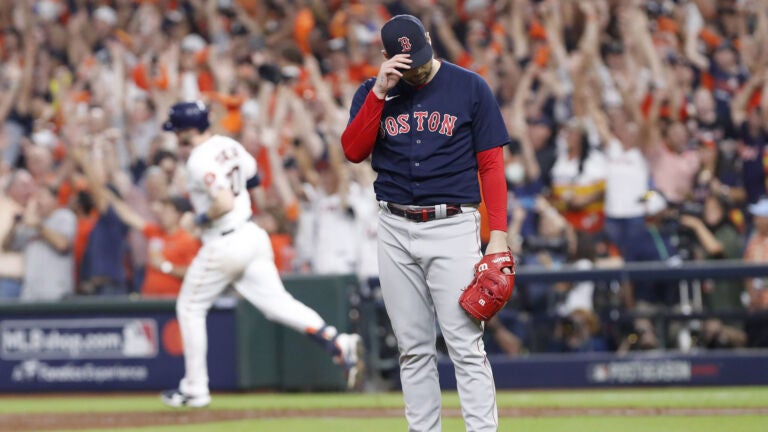