Dodgers manager Dave Roberts can add the President of the United States to his list of World Series critics.

Even before the final out of Game 4, President Donald Trump weighed in on Twitter to accuse Roberts of poor management. After Los Angeles starter Rich Hill was pulled from the game, the Red Sox rallied to eventually win, 9-6.

Trump said Roberts should have left Hill in the game.

Watching the Dodgers/Red Sox final innings. It is amazing how a manager takes out a pitcher who is loose & dominating through almost 7 innings, Rich Hill of Dodgers, and brings in nervous reliever(s) who get shellacked. 4 run lead gone. Managers do it all the time, big mistake!

“Managers do it all the time, big mistake!” Trump said of Roberts’s decision.

After the game, Roberts was asked about Trump’s tweet.

“I’m happy he was tuning in and watching the game,” said Roberts. “I don’t know how many Dodger games he’s watched. I don’t think he is privy to the conversation. That’s one man’s opinion.”

Hill, 38, had thrown 91 pitches when he was removed with one out in the seventh inning. After walking the leadoff hitter, he retired Eduardo Nunez on a strikeout before Roberts pulled him for Dodgers reliever Scott Alexander.

According to Roberts, it was Hill who instigated the possibility of a change.

“Well, prior to that, before the top of the 7th was going on – it was a long sixth for us – and I had a conversation with Rich, and we talked about it,” said Roberts. “He said, ‘Keep an eye on me. I’m going to give it everything I have. Let’s go hitter to hitter and just keep an eye on me.’ So right there, I know Rich did everything he could, competed, left everything out there.”

Alexander walked the only batter he faced (Brock Holt), before Ryan Madson was brought in to pitch. Madson got one out before giving up a three-run home run to pinch-hitter Mitch Moreland.

Still leading 4-3 going into the eighth, Roberts sent for Dodgers closer Kenley Jansen, who gave up the tying home run to Steve Pearce. One inning later, LA relievers surrendered five more runs as the Dodgers fell behind 3-1 in the series.

“I wouldn’t say ‘nervous,'” said Dodgers reliever Dylan Floro, who took the loss in Game 4. “I mean, they could go a totally different way…They weren’t saying anything last night when we dominated for eight innings. So we had a rough night tonight, but we’re gonna come back tomorrow and be ready to go.”

Red Sox manager Alex Cora was asked what he thought of the president criticizing a fellow manager.

The Red Sox, by contrast, left starter Eduardo Rodriguez in the game during a jam in the bottom of the sixth. Yet despite having pitched six scoreless innings like Hill, Rodriguez’s night ended when Dodgers outfielder Yasiel Puig hammered a three-run home run to give the home team a brief 4-0 lead. 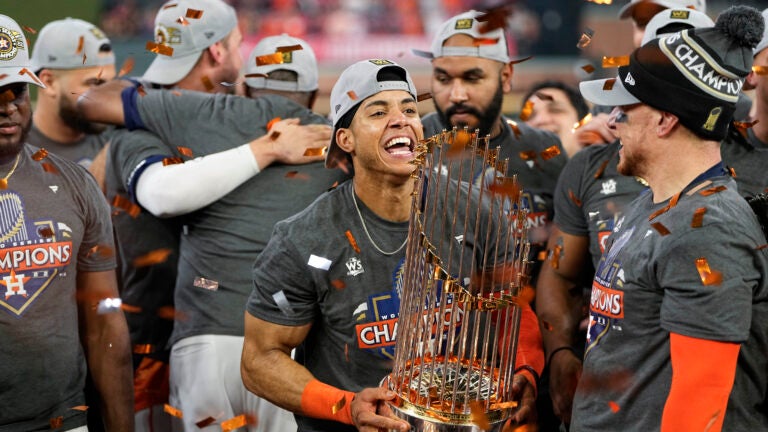