The 2018 Red Sox World Series victory parade was one to remember. As is tradition, the team rode duck boats, starting at Fenway Park and finishing near Government Center.

Here’s a look back at how it unfolded:

I’M KING OF THE WORLD! ? pic.twitter.com/2bGQTl2OLO

Here’s what the #RedSox parade looked like from the duck boats: pic.twitter.com/k2w1fJIbxK

Just a little whiffle-balling on Arlington as folks await the arrival of the Duck Boats. #RedSoxParade pic.twitter.com/AM9UkVJQbM

Boston police rescued a football for the parade fans and played a little catch. I love Boston. #WBZ pic.twitter.com/YVAaJKesi6

Jerry Remy poses for a fan as the #RedSox Victory Parade makes its way down O’Connell Way#RedSoxParade #WorldSeries pic.twitter.com/raDwEsiWjs

All hands in the air! Wally and the Sox continue celebrations in the 2018 Red Sox Victory Parade #Redsox #BostonGlobe pic.twitter.com/yD19vS6EJn

Stop throwing beers at @mookiebetts . We need him. @RedSox pic.twitter.com/f0B0T5tIxJ

Eduardo Nunez and Eduardo Rodriguez are doing the best they can (11:51 a.m.)

Who do we play for Rick?? pic.twitter.com/Fx9u4ZpvV6

Jimmy B and Kimbrel exclusive! ?? pic.twitter.com/Gygo64qI9C

Pitcher Rick Porcello celebrates with a cold beverage as he interacts with fans at the #RedSoxParade. https://t.co/EOeRhHeM0S #7News pic.twitter.com/PnyPb130Yr

David Ortiz and Pedro Martinez are also on the duck boats (11:30 a.m.)

What year is this? pic.twitter.com/KvkAdzrhEs

We’re on the duck with our biggest star, Griff Holt! ? pic.twitter.com/Z99ImhcJGi

The @RedSox are headed to the DUCK BOATS! #WorldSeries

Red Sox coverage is presented by @Amica auto, home and life insurance. Discover what extraordinary customer service is all about. pic.twitter.com/fLAEOdocqs

From our location of the parade route at @CityOfBoston city hall…. waiting for the #RedSox @boston25 pic.twitter.com/29hMUMLS68

We’re at the rally & @ac13alex recaps the last at bat of the season! pic.twitter.com/ZPpQz7fLuT

Sweet Caroline breaks out at Government Center ahead of the #RedSox parade. #WBZ pic.twitter.com/4hoQvfcPrz

Full crowd out on Boylston Street outside #FenwayPark waiting for the #RedSox #WorldSeries parade to start at 11. Watch live coverage NOW on #NBC10Boston & #NECN. pic.twitter.com/MdBkj5nxJy

Just to be the man to fall down at your parade pic.twitter.com/wBlZRgdfhr

People of the Parade:

.@BPLBoston with the best sign of the day so far #RedSOX #WCVB pic.twitter.com/anSY40RYYW

The Boston Athletic Association is out in full force at our finish line for the Boston Red Sox #WorldSeries celebration parade! #DamageDone

Chatting with David before the parade. pic.twitter.com/ai3437Iq9w

The Red Sox are starting to arrive, and fans are in Fenway Park to greet them (9:09 a.m.)

Fans inside Fenway, with the Red Sox and families assembling in the “cage” beneath the stands, ready for another great duckboat parade! pic.twitter.com/jpR3OhHuWO

#RedSox ace Chris Sale arrives at #FenwayPark for the victory parade. He had 3 strikeouts in the 9th inning of Game 5 of the World Series to close out Boston’s 4th championship in 15 years. Coverage NOW on #7News: https://t.co/EOeRhHeM0S pic.twitter.com/s4AiH8lHpY

A Dropkick Murphys message from yesterday:

#RedSoxParade: Fans are encouraged to travel by public transportation to see the parade. The MBTA is adding extra service, and the commuter rail will have additional coach cars on many of its lines. https://t.co/QsmUbZCLs2 pic.twitter.com/EyJQsLfMv9

RED SOX PARADE IS WEDNESDAY! Here is a list of the streets impacted by the parade route. You can find more details on the @7News website: https://t.co/MFhQiM4oty
Take the @MBTA to avoid parking! #redsoxparade pic.twitter.com/MfjMDXYmFQ

#RedSoxParade: Be thoughtful about Halloween costumes at the parade. Leave the masks at home. Fake weapons of any kind, including replica firearms, will not be tolerated. https://t.co/QsmUbZCLs2 pic.twitter.com/BKzGITmXM8

Read more on the Red Sox:

Why do Red Sox fans chant ‘Yankees suck’ even when the two teams aren’t playing each other?

Where does this Red Sox championship rank among the four this century?

‘These guys did everything right’: What Los Angeles media had to say after the World Series

Samuel Adams is releasing a Red Sox-themed IPA, and it’s only available this week 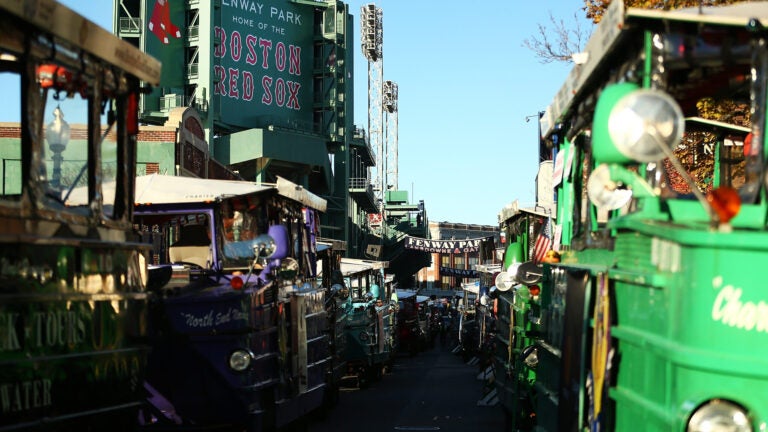