Coming off a fourth World Series win in 15 years, the Red Sox are firmly entrenched among baseball’s elite. Not only has the team been a regular contender in the playoffs, but also in the offseason in the pursuit of free agents.

Year after year, the Red Sox’ payroll ranks near the top of the league. And while some of Boston’s most important free agent additions (such as David Ortiz) were inconspicuous at the time, there have also been a parade of high-profile signings.

Few were more important or significant than that of Manny Ramirez on December 12, 2000. The power-hitting outfielder agreed to an eight-year, $160 million deal (then a team record). Completed during the Winter Meetings, the signing of the 28-year-old was a Red Sox statement of intent following the Yankees’ fourth World Series win in five years.

And it almost didn’t happen.

Only days before, as the usual free agent scrambling was occurring during the Winter Meetings, it appeared Ramirez would be staying with his original team, the Cleveland Indians.

“The competition between the Red Sox and Cleveland Indians was at the end game stage late last night, and there were strong indications that the Sox were not going to get their man yet again,” wrote The Boston Globe’s Gordon Edes on December 11.

Another proposed deal – which was reportedly contingent on Ramirez coming to the Red Sox – was to send rightfielder Trot Nixon and pitcher Tomo Ohka to the Montreal Expos in exchange for pitcher Dustin Hermanson.

Yet the Red Sox persevered. A unique aspect to Ramirez’s free agent tour that year was that ESPN’s “Outside the Lines” filmed and recorded many of the high-level interactions, providing a retrospective inside look at the process. (Then-ESPN sportswriter Bill Simmons wrote a lengthy piece chronicling some of the unintentionally humorous moments from the behind-the-scenes look, as Red Sox general manager Dan Duquette and Ramirez’s agent, Jeff Moorad, engaged in awkward negotiation).

Having experienced high-profile losses in previous free agent bidding wars, notably with the Yankees over outfielder Bernie Williams in 1998, and again with New York only days earlier with pitcher Mike Mussina, Boston went all out to land Ramirez. In the end, the Red Sox got their man. The money was a major factor, but Washington Heights native was drawn by another desire.

The reactions to Ramirez’s decision to head to Boston were summed up by the Globe’s sports section headline: 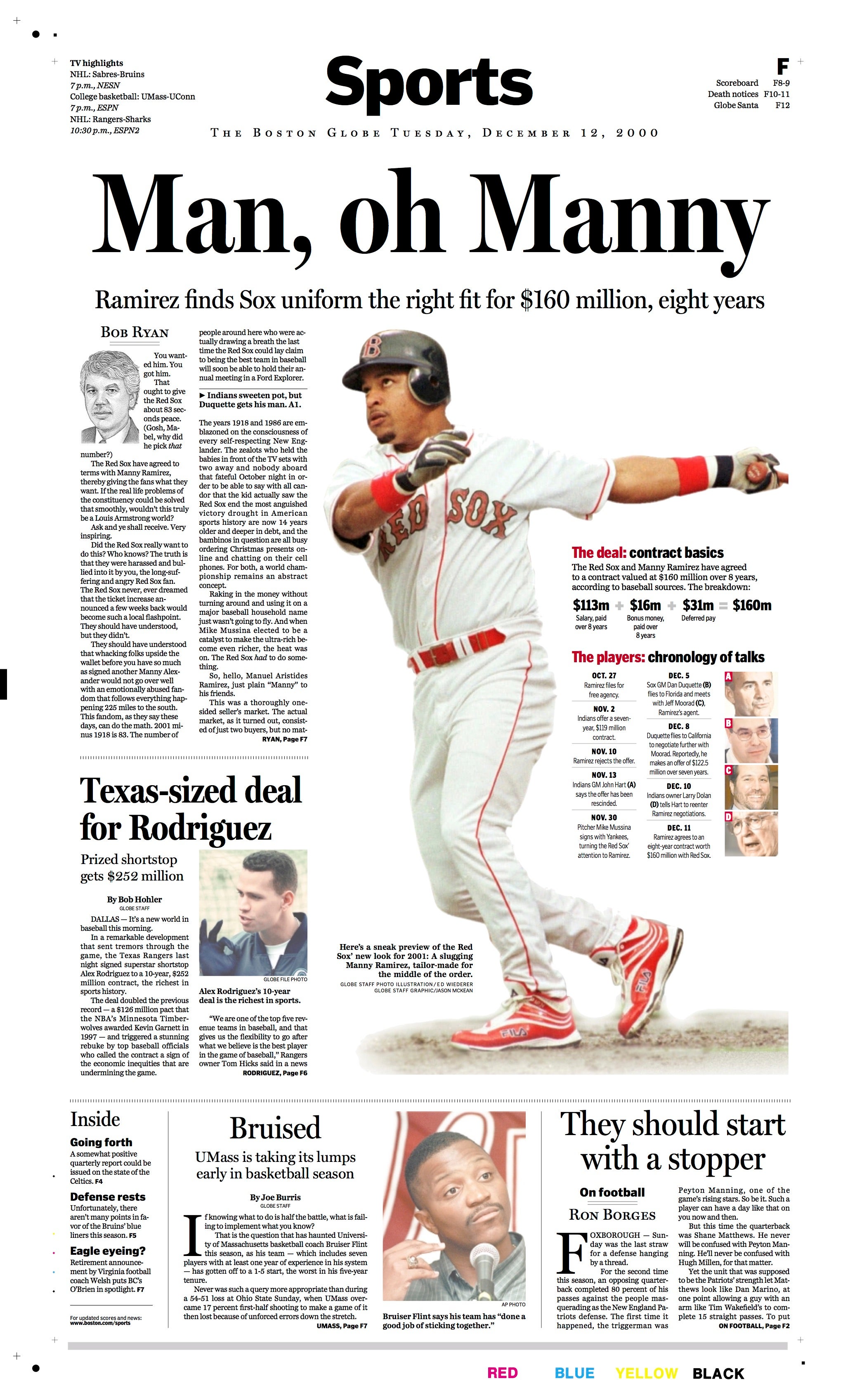 Almost simultaneous to Ramirez’s signing was that of another player who would have an immense impact on Red Sox history: Alex Rodriguez. The shortstop signed a record-setting 10-year deal with the Texas Rangers for $252 million. The two contracts dwarfed the previous record, set only days earlier when pitcher Mike Hampton signed with the Rockies for eight years and $121 million (a deal that Colorado only recently concluded).

Yet in Boston, the Red Sox and Ramirez retained the news cycle.

“The Fellowship of the Miserable is simply unable to come up with anything negative about this latest Red Sox move,” wrote Globe columnist Dan Shaughnessy. He later added of the Red Sox general manager, “Dan Duquette has gone from doofus to genius in less than 24 hours.”

At the beginning of his introductory press conference, Ramirez donned a Red Sox jersey for the first time before giving the thumbs up and saying one word.

It proved to be a masterful signing, as Ramirez lived up to his billing. He smashed 274 home runs for Boston in 1,083 regular season games. He also helped the Red Sox win two World Series titles, and was named MVP of the 2004 Fall Classic (which ended an 86-year drought).

“Everything is cool. There are no worries. Bill Belichick, Mike Keenan, and Rick Pitino are all temporarily off the hook,” Holley said. “Dan Duquette suddenly looks as good as Brad Pitt.”

Of course, Belichick – at that time mired in his first and still only losing season as Patriots coach – would emerge with a Super Bowl win the next season. Keenan, Pitino and even Duquette wouldn’t be as lucky. The man who had traded for Pedro Martinez and signed Ramirez would also sign Johnny Damon in Dec. 2001 before being fired by the new ownership in March, 2002. 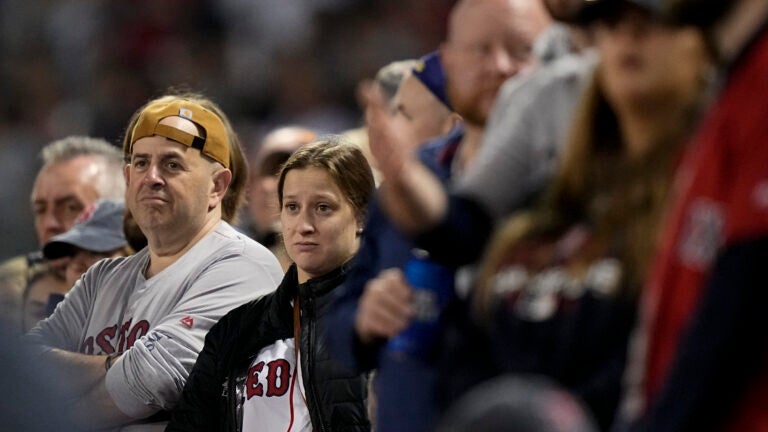