It was a bottom-of-the-notebook news item over the weekend in San Diego: Dustin Pedroia planned to be in attendance at Coors Field in Denver on Tuesday and Wednesday, as the Red Sox made just their fifth visit to the Rockies and first since 2013.

“Pedroia, who returned home to Arizona to be with his family and contemplate his future,” wrote the Globe‘s Pete Abraham, “has remained in touch with [manager Alex] Cora and the team via phone calls and occasional FaceTime sessions.”

We’ve not seen Pedroia since May 27, when he announced at a seeming hastily called press conference that he was “at a point right now where I need some time.” He’d taken himself out of a rehab game days before, the pain in his surgically repaired left knee too much to play through, and he was heading home to Arizona for a mental break and continued rehab.

“Some days, I feel fine. An hour later, it’s like, walking is tough,” said Pedroia, who turned 36 two Saturdays ago. “I think that’s just the tough part at this level. You play 162 games in 183 days or whatever it is. If I’m on an hour-to-hour basis of being able to do anything athletically, that’s tough. I think the time will give me the right answer of if my knee can do this.”

At that time, Pedroia talked about having another surgery proposed to him at the end of the last season, but that he wasn’t considering it because “it would affect the quality of [his] life.” He ended up having a joint preservation procedure in early August, one that involved a bone-strengthening plaster injection, plus the removal of bone spurs and scar tissue.

“It’s something to ease the pain or get the pain away. It’s just another step to see where it takes us,” Cora said after the team announced Pedroia’s surgery. “He’s going to keep trying to find ways to make this happen.”

Pedroia told WEEI.com on Monday night that he has two more weeks to go on crutches and that “things are going really good compared to where I was before the surgery.” Even before that, simply the scene of him in Colorado will bring back the warmest of memories.

On Oct. 27, 2007, at Coors, Pedroia cracked a two-run double in the eighth inning of World Series Game 3, all but locking up a championship series he’d begun with a leadoff home run and the final flourish of a Rookie of the Year campaign. Back three years later, on June 24 came his finest individual night, if not anyone’s in a Red Sox uniform: 5 for 5, a double, three home runs, and five RBI in a 13-11, 10-inning win.

It was the last day before injuries began to define his career. In his second at-bat the following night in San Francisco, Pedroia fouled a ball off the inside of his left foot, breaking it. He ultimately missed 44 games, during which he famously fielded grounders on his knees one afternoon back in Boston.

He was stellar again in 2011. 2012 was the year he played the final series of a lost season with a broken finger because the doctors told him it wasn’t going to get any worse; “I want to play. I want to be out there for the guys,” he told reporters in New York. 2013 was when he played the entire season with a torn ligament in his left thumb he suffered on Opening Day, hitting .301 in an AL-leading 724 plate appearances despite not being able to grip his bat correctly.

He sprained his wrist in the 2014 home opener, reaggravated it multiple times, then had surgery and was done for the year in early September. He lost 16 games to a right hamstring problem in the summer of 2015, then 42 more when he came back too quickly. (“Sometimes you have to use your brain instead of your heart a little bit,” he told reporters then. “I’m not used to doing that.”)

Then, 2016. A 201-hit season in 154 games as the Red Sox won the first of three straight division titles, but Pedroia tore his meniscus in September and had surgery in October. Manny Machado spiked him the following April, Pedroia playing through it and hitting .293 in 105 games. Pedroia then had the microfracture surgery he thought would be best for him long term, but that has helped limit him to nine games in two years.

“When you’re coming back from something like this, no one thinks you can do it,” Pedroia said this spring, when there was optimism again about his recovery. “If I’m not confident about it, it’s not going to happen.”

It’s hard not to think, given current events, of Andrew Luck’s statement as he retired on Saturday night about being in “this cycle of injury, pain, rehab, injury, pain, rehab, and it’s been unceasing, unrelenting, both in-season and offseason.” It sounded an awful lot like what drove Pedroia to need time and space back in May.

“The only way I see out is to no longer play football,” Luck said. “It’s taken my joy of this game away.”

It’s hard also not to think about David Wright, the face of the Mets franchise (just as Pedroia was the face of the Red Sox) who fought for years to get back on the field and had multiple surgeries to try and play through a chronic back condition. He finally relented last September, playing two final games as a tear-filled farewell.

“I can’t sit here and tell you that I’m good with where I’m at right now — that would be a lie and that would be false. You love something so much and you want to continue that,” Wright told reporters. “I’m at peace with the work and the time and the effort and the dedication that I’ve put into this. I’m certainly not at peace with the end result.”

Pedroia has already fought longer than Wright did, against a tide that feels just as unrelenting. I conjectured the day of that press conference Pedroia will get the same type of salute, though time will tell when and if he’s ready to accept that.

Right now, he’s headed back to join his team in Colorado. They’re no doubt happy to have him: “He’s the master of FaceTime,” Cora said earlier this month. “It’s hard not to have him, but at the same time, from where he’s at, he’s always paying attention. He doesn’t missing an inning. … He’s amazing. He cares a lot.”

Much like Nomar Garciaparra, it all won’t end in Cooperstown the way it seemed like it could just a short few years prior. But to an even greater degree than Garciaparra, any chance to celebrate what Dustin Pedroia’s meant to the Red Sox and their fans, even if it’s just a two-game series at the end of a squandered season, is one worth taking.

“He’s the ultimate guy to lead a team,” Jackie Bradley Jr. said this spring. “He can be a vocal leader, he can lead by example, a lot of different ways he can show his leadership. I think that’s what makes him special. Everybody wants to have him back.” 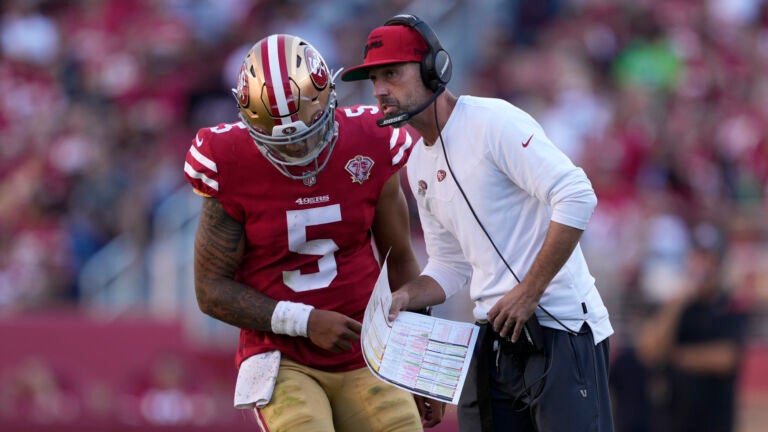