In theory and early production, this was intended to be a state-of-the-Red Sox, look-back, look-ahead sort of piece.

You know, an attempt at context after a relentlessly frustrating lost season followed the most spectacular season in franchise history.

But I can’t help it. First, I’ve got to spill a few more words ranting about the flat-out nutso possibility (likelihood?) they will trade Mookie Betts this offseason.

One hundred years after the franchise sold Babe Ruth to the Yankees, they seem hell-bent on making their dumbest personnel decision since.

It’s tough to get any group of people to agree on anything these days, but I assume Betts – a 26-year-old, home-grown, five-tool superstar who does everything right and might be the best player in the game if not for legend-in-real-time Mike Trout – has something like a 99.9 percent approval rating.

And yet the Red Sox, out of a desire — not a need, not a mandate, a desire — to cut payroll and get below the competitive balance tax, are at the very least floating trial balloons on trading arguably the most well-rounded position player we’ve ever seen in a Red Sox uniform.

And they’re doing this less than a year after committing $213 million to Chris Sale and Nathan Eovaldi, a pair of pitchers, one of whom has never been especially good. Guess bollixing the Jon Lester negotiations five years ago didn’t disprove their theory about the risks of paying pitchers in their 30s after all. They didn’t pay Lester, but they’ve paid others after losing him, and it’s now haunting them to the point it may cost them a genuinely great player in his prime.

It shouldn’t, and you should be enraged about this, to the point that the backlash they receive makes the response to the firing of Don Orsillo seem quaint. It’s nuts that the Red Sox, who by the way announced a modest increase in ticket prices Monday, are acting like some mid-market team with this. They aren’t the Brewers or the Twins (because if they were, for one thing, they’d be in the playoffs right now). They can afford Betts and take their lumps with the luxury tax a little longer. You don’t give up this player to save money.

Imagine how amused we’d be if the Yankees were pushing this on their fanbase with, oh, Aaron Judge, who isn’t the player Betts is?

Yet one of the revelations that came from Sunday’s last day of school at Fenway is that it seems a foregone conclusion within the locker room that Betts is going to be traded.

Is Mookie Betts done in Boston?

“I think everyone knows we don’t think they’re going to be able to afford Mookie,’’ J.D. Martinez, one of the best free-agent signings in franchise history who sounds like a goner himself, told NBC Sports Boston. “It’s one of those things. It’s kind of hard to have three guys making $30 million on your team. He deserves it. He’s earned it.’’

The Red Sox should not be allowed to rationalize this. They don’t need to save money to lock up Rafael Devers — he’s not a free agent until 2024. They do need quality in the farm system, but trading Betts for prospects while he’s a year from free agency isn’t the way to do it. The Red Sox still have a fairly affordable lineup, with Devers, Andrew Benintendi and Michael Chavis still on their first deals and cornerstone Xander Bogaerts a relative bargain at a $20 million per year average. Where are these prospects going to play? And don’t tell me they should acquire young pitching for Betts. Even the best prospect arms are volatile. They shouldn’t expect a big haul overall, either, because of Betts’s desire to get to free agency. Do you know who Yusniel Diaz, Rylan Bannon, Dean Kremer, Zach Pop, Breyvic Valera are? Don’t blame you if you don’t, unless you’re a farm director or a prospect whiz for Baseball America. They’re the five players the Orioles got for free-agent-to-be Manny Machado in July 2018 from the Dodgers.

Trading Betts is bad idea. Trading him at a discount would be malpractice, especially since the Red Sox with him should be a postseason contender next year.

Consider this the promised synopsis of this season: It was over with the eight-game losing streak from July 28-Aug. 4, but it never really began, did it? The pitching was never right, though the bullpen got sorted out as the season went on. The Red Sox actually had some incredible breakthroughs — Bogaerts hit 33 homers with a .939 OPS, Rafael Devers had 90 extra base hits in his age-22 season, Eduardo Rodriguez had a shot at 20 wins on the final day of the season — while Betts and Martinez again delivered exceptional seasons.

And yet they lost 24 more games than they did a year ago. Some of it was bad luck. Some of it was overconfidence. Most of it was that extremely well-paid pitchers performed like they were auditioning for the 1998 Tampa Bay Devil Rays.

Those pitchers, save for Rick Porcello, are certain to be back next season, and aiming to rediscover the success that made them filthy rich in the first place. Hey, it is possible. We haven’t seen the last of them, but hopefully we’ve seen the worst of them.

Mookie Betts drew big crowds during the final days of the 2019 season.

We better not have seen the last of Betts. But if we did, what a final scene. In an utterly meaningless game Sunday, he played like a playoff berth was at stake, scoring from first after Orioles right fielder Steve Wilkerson non-chalantly threw the ball in as Betts rounded third.

It was a brilliant play, one meshing smarts and talent, one that reminded us how much he cares even when there are no stakes beyond that day’s outcome.

If that’s his last scene with the Red Sox, it was perfect. There’s also no acceptable reason that it should be. If you want the Red Sox to get this right again soon – and that should be the mission the way the roster is constructed – don’t help them justify trading Mookie. That’s the kind of wrong that haunts. 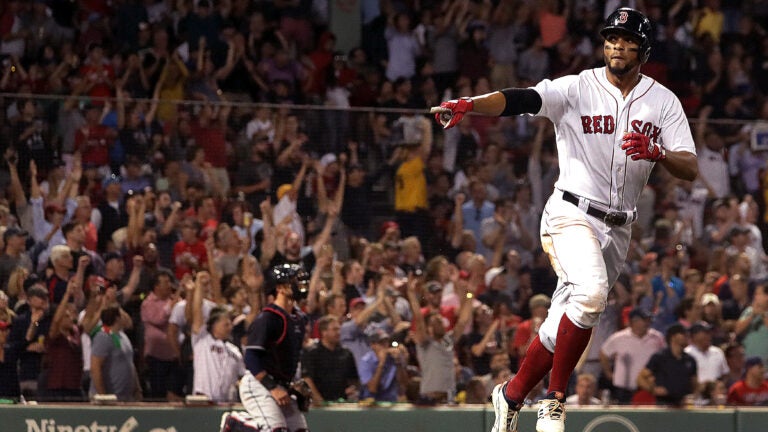 The Red Sox overvalue where they stand, and undervalue those who stand with them