Here are the moves that have been made so far, as well as some rumors about possible landing spots for Red Sox free agents.

The Dodgers and the Red Sox have preliminarily discussed the prospect of a trade for Mookie Betts, according to a USA Today report citing two sources with “direct knowledge” of the situation.

But the Globe’s Alex Speier has heard from multiple major-league sources that the Red Sox and Dodgers hadn’t engaged, because the Dodgers’ clear focus appears to be making a trade for Indians shortstop Francisco Lindor.

USA Today said Los Angeles “could turn its attention” to the Red Sox in the event they can’t land Lindor.

With every day that passes, the totals continue to skyrocket. The latest example came Wednesday evening, when the Angels landed an agreement with Nationals’ third baseman Anthony Rendon.

Monday: Stephen Strasburg gets $245 million from the Nationals.

Tuesday: Gerrit Cole gets $324 million from the Yankees.

Wednesday: Anthony Rendon gets $245 million from the Angels.

Over three days, Scott Boras negotiated $814 million worth of deals.

Honestly, with all this money floating around, you can’t blame Bartolo Colon if he wants to keep pitching.

Meanwhile, back in the Dominican Republic, Bartolo Colon, 46, is still chasing the big league dream. He still wants to pitch. #MLBWinterMeetings pic.twitter.com/iotLaFsc6T

Gerrit Cole agreed to a nine-year, $324-million deal to join the Yankees. That’s a lot of money.

Other moves on Tuesday included Yan Gomes and Howie Kendrick agreeing to deals to stick with the Nationals, a key part of Washington’s attempt to keep their World Series roster together. The Giants added righthanded pitcher Kevin Gausman on a one-year deal. San Francisco’s moves indicate they may not be willing to dish out a big-money, long-term deal for 30-year-old Madison Bumgarner.

Hmmm. We’ll keep an eye on this one.

Didi Gregorius and Joe Girardi are reuniting, according to multiple reports. The former Yankees shortstop agreed to a one-year deal to join the Phillies, where Girardi has taken over as manager after Gabe Kapler was fired.

Alex Speier reports that trading Mookie Betts doesn’t seem like a high priority for Boston. One executive at the Winter Meetings whose club is interested in the outfielder said the Red Sox have not made clear Betts’s availability, and instead have shone a bigger interest in the value of other players on the roster — including starting pitchers.

The Globe’s Pete Abraham reports that the Red Sox discussed a trade that would send Jackie Bradley Jr. to the Mets, but talks broke down. New York turned to Houston and traded two low-level prospects for outfielder Jake Marisnick.

Abraham also reported that the odds are slim for Brock Holt, Mitch Moreland or Rick Porcello returning to the Sox because the team feels it can fill their roles more economically than it would take to re-sign the trio.

Stephen Strasburg agrees to a record contract to return to the Nationals. It’s the first big announcement of the Winter Meetings, and sets up Gerrit Cole — also a Scott Boras client — for an even bigger payday. The $245 million, seven-year deal eclipses David Price’s $217 million, seven-year agreement that began in 2016.

Just a couple of days after being non-tendered, both infielder Marco Hernandez and reliever Josh Osich agreed to one-year deals with the Red Sox.

According to SportsNet New York, there is mutual interest between the New York Mets and free agent pitcher Rick Porcello.

Red Sox catcher Sandy Leon is traded to the Cleveland Indians for minor league right-handed pitcher Adenys Bautista. While it’s not much, it’s more than Boston might have gotten — had Leon not been traded, he likely would have been non-tendered and become a free agent.

Center fielder Jackie Bradley Jr. is tendered, along with 26 unsigned players, at the deadline. 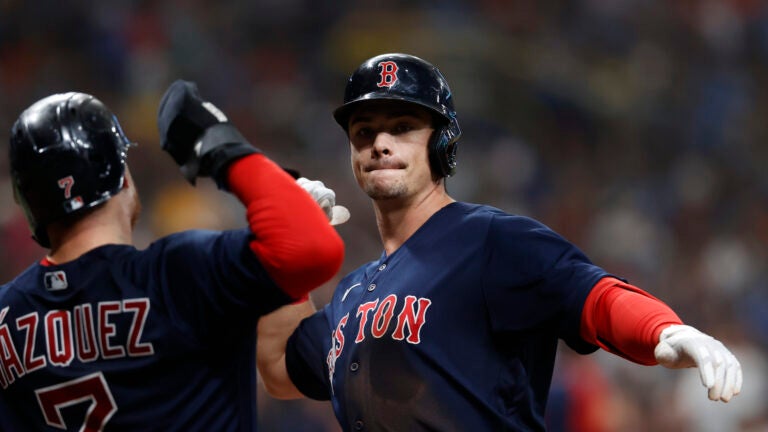