Alex Cora is going to wear this. All of this. From Major League Baseball, should it really want to snuff out illegal sign-stealing, and absolutely from the court of public opinion, in which he’s won his last battle anywhere beyond Red Sox Nation.

What a difference 12 months can make.

Cora oozed confidence from the moment the Red Sox introduced him as their new manager in November 2017, when he rolled into Boston with the cachet of a freshly won World Series, proclaiming that “Boston is a challenge, but for me, it’s not.” His first year here certainly did nothing to humble him, so it was hardly a knock-you-over surprise when, last January, Cora did far less than downplay the prospect of back-to-back world championships.

“You guys might write this somewhere. I don’t care,” he told the crowd at the annual Boston BBWAA Dinner. “If you thought last year was special, wait till this year.”

Wait we did. Through a seven-month season, waiting in vain for the Red Sox to get out of second gear. Through three months since ownership’s proclamation that cutting payroll some 15 percent was “a goal, not a mandate” for 2020, with a similar lack of delivery. Not that anyone’s much complaining about that, given Mookie Betts and David Price to the Dodgers is on new baseball chief Chaim Bloom’s scratch pad, and apparently not as a mere daydream.

As for Cora? Mark your calendars. He’s scheduled to be in attendance come January 16, at this year’s Boston writers’ dinner, and at the annual Red Sox Winter Weekend that follows in Springfield. Even if, in all likelihood, he doesn’t have much to say beyond what his old boss, Houston manager A.J. Hinch, did a month ago at the Winter Meetings when asked about the Astros’ sign-stealing scandal in which Cora was a key part.

“We continue to work with them as they navigate the investigation,” said Hinch, in part, referencing MLB and the looming hammer it’s wielding over one of its most successful franchises of late. “And now we’re waiting with everything in their hands. . . . I hope there’s a day where we can answer more questions, but today’s not that day.”

Heat’s off A.J., isn’t it? At least a little, though punishment in Houston’s part of this is apparently close. Because I don’t know how you can read Tuesday’s latest bombshell from The Athletic, in which three sources outlined that the 2018 Red Sox used their video replay room to steal signs during their 119-win season, and not conclude something simple.

This just became Cora’s scandal. And the surest thing about the 2020 Red Sox might just be that, whatever their roster’s made up of, it’s going to face time without its skipper because of a suspension.

This is his. Not the Astros. Not the Red Sox. Not Hinch. Not Carlos Beltran, the new Mets’ manager whom Ken Rosenthal says built the Astros’ bang-the-trash-can-slowly system with Cora while he was Houston’s bench coach, and Beltran was a veteran playing out the string of a 20-year career.

Alex Cora’s taking this one to the grave. Woe to the Twitter mentions to anyone who tries to connect the dots between the Red Sox and Patriots, but all those No. 12 avatars have a point. When you consider the thing Bill Belichick’s most often accused of — taping the Rams’ walkthrough before Super Bowl 36 — was completely retracted by the outlet that published it, and that the Spygate scandal of which Belichick was actually guilty is much more a matter of semantics than the average person thinks it is?

Cora, based on these reports, makes Bill Belichick look like a choir boy. Were the wait to see how Bloom’s 2020 Red Sox develop not bad enough, it just got even worse.

And yes, I entirely understand the act of stealing signs, of doing whatever possible to get any edge, is basically one of the game’s core principles. Commissioner Ford Frick was worried about cameras in center field 60 years ago, Ty Cobb was worried about “mechanical devices worked from outside sources” 35 years before that, and we could certainly continue the chain back as far as we felt like.

It’s the story of the BullFrog sunscreen all over again, that the behavior we’re hearing about is just the tip of the iceberg. Almost every success you’ve ever witnessed on a field, a gridiron, an ice sheet, a boardroom, whatever, was almost certainly supplemented with behavior skirting the rules, if not outright subverting them. Your grandmother would be horrified, but spare the outrage.

But also, understand with just what we’re dealing. MLB rules prohibit stealing signs — or anything else — with electronic means. When MLB caught the Red Sox using the replay room and Apple watches in 2017, it issued a fine and a statement: “Future violations of this type will be subject to more serious sanctions.”

While the Red Sox promised to stop, the Houston system was in full effect, helping the Astros to their World Series title and helping Cora to his first major-league managerial job.

“Before the 2018 season,” Tuesday’s report in The Athletic read, “after years of barely enforcing its broad rules regarding replay rooms, the league made it crystal clear: Replay rooms cannot be used to help steal signs.”

Suffice to say, Cora’s supreme confidence in himself carried over to thinking he could flout an explicit directive, too. It wasn’t as smooth a system as the Houston one: Player in the replay room, to dugout, to a baserunner, to the hitter. It had, in The Athletic’s words, “a semblance of propriety” because it required some of the elements of legal, accepted, between-the-lines sign stealing. And, the report notes, it was largely rendered moot in the 2018 postseason when rightly paranoid teams frequently changed signs and — in its classic “we’re totally serious about this now, gang” manner — baseball actually assigned monitors to the replay room.

No matter. You know nuance needn’t apply in these cases, which, honestly, I can’t really even say I’m bothered by here. I’m certain Alex Cora isn’t the only guy who scoffed back in March, told, “Electronic equipment, including game feeds in the Club replay room and/or video room, may never be used during a game for the purpose of stealing the opposing team’s signs.”

He is, however, the one who got caught.

Sports, especially baseball, are in the midst of a technological reckoning. High-definition, slow-motion broadcasts made everyone an umpire. When a ball’s called a strike, we know it. When a guy’s foot comes off the base on a slide, we know it, even if it’s hard to decide what we really want done about either.

When a team’s videotaping everything for scouting purposes, they’re going to know more than they should, and when a league’s not on the cutting edge and doesn’t prioritize controlling that information, what the team’s going to do with that extra information isn’t real hard to figure out.

Plenty want replay use shelved in sports, content that the occasional error via the human element is better than our current reality, where we’re forced to question the spectacular in real time because there might’ve been a knee down or the ball wasn’t quite in the mitt. In Wednesday’s Globe, Peter Abraham proposes MLB ban everything outside of “MLB-approved content” in dugouts and clubhouses during games, killing the challenge system and transitioning replay decisions from managers to a “fifth umpire watching from the press box level.”

“Fines, suspensions, and flashing lights won’t fix this mess. There always will be somebody trying to find a way around it,” Abraham wrote. “It’s naive to think otherwise.”

He’s right, and his ideas are sound, but it’s also naive to think there won’t be players who find a way around that system. Which is where the actual solution, if one exists, sits: Punishment for the offenders.

Cora’s barely named in The Athletic piece, but the idea this happened beyond his purview is ludicrous. These Red Sox are his club, and he pulls no punches in public or private, confident enough in his own abilities to admit when he’s made a mistake.

This one does nothing less than tarnish what was the greatest Red Sox season any of us will ever see, and puts him square in the focal point of this entire debate. Rightly or wrongly, the seriousness with which Major League Baseball takes the entire sign-stealing argument will be filtered through him.

Or, to put it another way, the commissioner told him to stop. And Alex Cora said, “If you thought last year was something …” 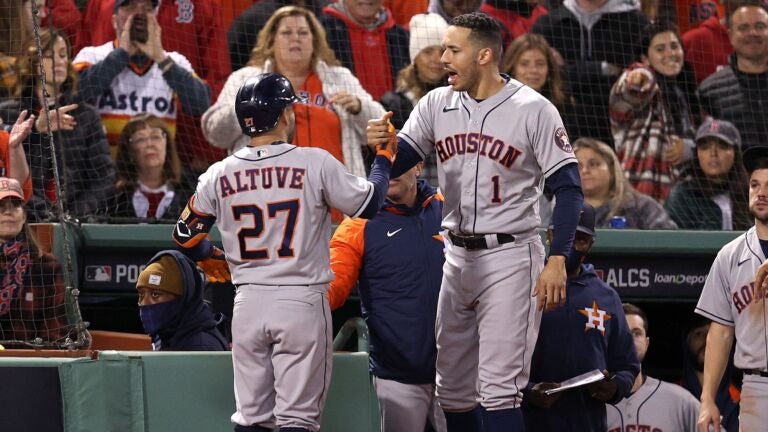 ALCS Game 4 updates: Jose Altuve ties it 2-2 with solo homer in the 8th