Trust us. That was the message.

For 50 minutes Wednesday, Red Sox brass strode the road that former Houston manager A.J. Hinch did during the Winter Meetings — so many questions, so little to say. Alex Cora is still beloved, but no longer employed by the Red Sox, out barely two years after he was everyone’s choice for manager, and barely a year after the most dominant baseball season any of us will see the rest of our lives.

Any of the uncomfortability Hinch seemed to feel back in December, though, was absent from Fenway Park on Wednesday. In the glare of an electronic sign-stealing scandal being treated at the level of Pete Rose and the Black Sox, Sox CEO Sam Kennedy was asked if he had a message for Sox fans.

He was downright ebullient.

“I’m glad you asked that question,” he began. “We have high expectations in 2020. We fell short last year. We talked with [new Sox team builder] Chaim [Bloom] about the fact when he came in we’re better than an 84-win club. We think we have a team that’s built to compete in the American League East, and the bar that [Sox owner] John [Henry] and [Sox chairman] Tom [Werner] have set for us here in Boston is extremely high. And we feel that pressure each and every day, to try and put a great product out on the field. We have a very talented club. We think we can compete in the American League East, and we thank our fans for supporting us these past 20 years. As long as these [Henry and Werner] own and operate the Red Sox, they’re going to have those high expectations.

“As I said before, the highs have been high and the lows have been low, but we come into 2020 excited and enthusiastic about a very talented team. Veteran players, younger players, and excited about getting to spring training.”

The “visit redsox.com, where select tickets are on sale now” was mercifully left inferred.

Wednesday was never going to be a satisfying endeavor. There is an ongoing investigation into the Red Sox, and the “commissioner’s directive to not speak about the investigation” referenced repeatedly is real. Someone familiar with commissioner Rob Manfred following his nine-page ruling against the Astros told ESPN, “the impression [given to other teams] was that the penalty for complaining would be more than Houston got.“

And yet within that, so much else wasn’t said either. “We’re angry,” for one. “We’re sorry,” either. We barely got an admission of embarrassment, and not only did it take reporters three tries, Kennedy only framed it through Cora — “He apologized yesterday to us, for the embarrassment this caused.”

Wednesday, it was made clear, was just about Cora, and just about what he did with the Astros. The Red Sox, already punished for using an Apple Watch to steal signs in 2017, haven’t yet formally been convicted by Manfred for 2018, when — as reported by The Athletic — they used their video replay room to do it. And that distinction was used to the hilt.

“There will be a time when we’ll be able to talk about this fully,” Werner said. “We ask our fans to reserve judgments on any conclusions that they reach until the commissioner’s investigation is over.”

“We would hope everybody would reserve judgment,” Bloom said.

“I know it’s asking a lot, but it makes a lot of sense at this point to wait until the report comes out to address any of these issues,” Henry said.

I get it. Optics and “bad looks” are almost always overblown. Robert Kraft, following his February charges in the Orchids of Asia case, was told repeatedly he should simply fall on his sword. Think public opinion about him would be any different today if he had? (And oh yeah, by the way, the case against him fell apart.)

Maybe the Red Sox think there’ll be more bombshells about other teams between now and their reckoning. (I’d tread lightly with the “we got cheated,” CC Sabathia.) Maybe they think their upcoming report, as the Astros one did, will bury Cora and Cora alone. (This is his scandal, after all.) Maybe they simply think you’ll cease to care once the guys hit Fort Myers and Mookie Betts is still here and “SO GOOD! SO GOOD! SO GOOD!” Maybe it’s something else entirely, and maybe one or all of these are right.

They’ve led your Red Sox for almost 20 years. Won you four world championships, but are about to hire their sixth manager.

Do you trust them?

A lot of you don’t. Go look around Twitter in the hours after Wednesday’s presser. Heck, consider 10 Super Bowl trips and six titles hasn’t kept a vocal minority from wanting Kraft to sell his team, either. We are an entitled town, long removed from having to settle for Ray Bourque bringing Colorado’s Stanley Cup back to Government Center.

Imagine being born into a world where your hometown teams just keep winning championships.

This is the story of that person. Meet Jason McKeon, or as you might know him, the Sign Kid. #StanleyCup pic.twitter.com/8ch3OX1dYB

But though championship flags may fly forever, they don’t paper over every blemish. Terry Francona was on WEEI on Wednesday, speaking about his friend Cora while asserting — as his son, Nick, did about his former boss, former Angels manager Mike Scioscia — the idea “everybody” operated outside the rules was an overstatement.

Francona, the second of those six managers, and the first Henry and Co. hired. If you don’t simply remember how it ended, Francona’s 2013 book can get you mad about it all over again, from the attempts to get out of having to fire a two-time World Series winner to what followed when they did.

“Somebody went out of their way to hurt me,” Francona told biographer Dan Shaughnessy, in reference to the “multiple team sources” who raised the manager’s “troubled marriage” and “use of pain medication” for public consumption in the pages of the Globe.

“He got kicked in the balls just like everybody else that ever left Boston,” former Sox ace Josh Beckett told Shaughnessy. “Why don’t they just let you leave? They did it to Nomar [Garciaparra]. Now they do it to him.”

That, too, feels like a million years ago. And in baseball terms, it is. Since, Henry’s Red Sox have spent more than $1.5 billion on payroll, three times finished last, twice more won it all, and annually filled Fenway Park beyond 96 percent capacity. The players in the uniforms have changed, but he, Werner, Kennedy, and plenty of others remain the same.

“John talked about family. We’re a family, at the Boston Red Sox. All the men and women that work for this organization, we’re a big family,” Kennedy said Wednesday. “We’ve been through a lot together in 19 years together, and [Tuesday], John referenced in his statement, everyone acted in the best interests of the club.”

“We’ve turned the page,” Werner concluded Wednesday. A high-level sports organization, Henry explained “is focused on the future.” So, too, should we, and what’s coming.

When the league’s report on the latest Red Sox transgression comes out, however rampant rule breaking is, however good they’ve been before this week, we will look to them again, offer our judgments, and ask the same question.

Do you trust them?

And if you don’t, what then? 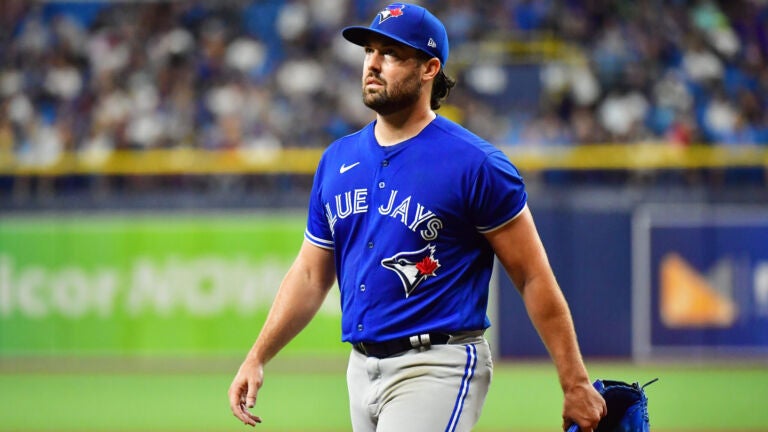