The Bruins rallied to defeat the Golden Knights on Tuesday, 3-2. David Krejci marked his return to the team after injury with a goal and an assist.

Tonight, the Celtics face the Grizzlies at TD Garden at 7:30 p.m.

Curt Schilling’s thoughts on the Hall of Fame: Former Red Sox pitcher Curt Schilling received Hall of Fame votes from 70 percent of the Baseball Writers’ Association of America. It was five percent (20 votes) shy of the requisite 75 percent needed to be inducted.

Schilling, who helped the Red Sox win two World Series titles (and won an earlier championship with the Diamondbacks in 2001), received the most votes of any player who didn’t get in this year. Derek Jeter and Larry Walker were both elected to the Hall of Fame, and it could be Schilling’s year in 2021.

In an interview with Bob Costas, Schilling talked about why he thinks he hasn’t gotten in sooner.

“It became I think focused on things that weren’t on the baseball field that I’d done or said,” said Schilling. “And it became meaningless in that sense. In the sense that people who were flawed, or more than anybody I knew, were going to be judging my character. So it was like, ‘OK, I don’t need them to validate what I did.'”

“If I’m outside the Hall of Fame with Luis Tiant, I’m alright.”@gehrig38 talks with Bob Costas leading up to the announcement of the 2020 @baseballhall class. #HOF2020 pic.twitter.com/HnLifneTbL

Asked if he thinks he’ll get in before his time on the ballot expires in three years, Schilling confessed he wasn’t sure.

“I don’t know,” said Schilling. “And I don’t want to say I don’t care anymore because I do, because a couple things have happened in my life that — I lost my mother this year, my wife lost her mother as well — it’s been a very, very hard year for my family. But the day after my mother passed, my first thought was if I make it to the Hall of Fame, she won’t be able to sit there and listen. And the Hall of Fame in my mind is about recognition of the thousands of people that you stood on to get there.”

Schilling was fired from his longtime job at ESPN as an analyst in 2016 over a string of offensive posts on social media.

“Tremendously,” Schilling said of the effect his “provocative views” had on Hall of Fame voters. “Anybody that doesn’t vote for me usually writes a column and includes the reason why they didn’t.”

Asked about a specific Schilling tweet from 2016 that alluded to the killing of journalists, Schilling eventually commented on his social media stance.

“There are a couple of times where Shonda [Schilling], who clearly would be very comfortable with me getting off Twitter, has said, ‘What are you thinking?’ And I’m like I don’t get what the big deal was. And a bunch of people who hate my guts and don’t care what I think, care what I think.”

“I’m human. I don’t want people to not like me,” Schilling explained. “But I understand that in a world of how many people, people aren’t going to like you. But I have never maliciously tried to hurt someone, verbally or [otherwise]. That doesn’t mean I haven’t done it. But to be made out to be a really, really bad guy is something that I’m not happy about.”

Schilling believes that his controversial opinions have played the largest role in not getting into the Hall of Fame, but others have disagreed.

“Bogus,” wrote Boston Globe columnists Dan Shaughnessy of Schilling’s reasoning. “Schill’s latter-day, off-the-rails rants and social media posts are not singularly what has kept him out. He is simply not a slam-dunk Hall candidate.”

Shaughnessy voted for only Jeter on the 2020 ballot.

Schilling noted that he would be “disappointed” to not get in at some point in the future, but still feels satisfied with the accomplishments of his lengthy career.

Trivia: What was the last name that Fleer Ultra used on its 1997 baseball card showing David Ortiz?

The locker next to Tom Brady: When the Patriots traded for Randy Moss in 2007, Tom Brady broke with team tradition and requested that Moss have the locker next to his. Previously, the lockers had been arranged by Bill Belichick according to player numbers. Yet Brady used the locker room setup to build what would become a historically great relationship with his new teammate.

It was an interesting glimpse into a fascinating subplot: What’s it been like to have the locker next to Brady? USA Today reporter Henry McKenna explored the subject recently, speaking with several of the players who have held the locker room distinction of sitting next to Brady. [For The Win]

Devin McCourty’s future: Patriots safety Devin McCourty is 32 and is set to become a free agent. One initial question entering the offseason was whether McCourty would want to keep playing football.

The next question will now be if McCourty stays in New England in or not. With several former Patriots assistants spread across the league in head coaching roles, it’s possible the longtime New England safety could be lured elsewhere.

Titans DC Dean Pees retired from football yesterday. One of the best coaches I ever had. Two things you knew about Pees. He loved you and he was going to have you ready to play. My first practice back after a stroke in 2005. First play, full pads, 9 on 7 drill. The play…ISO. One guarantee on this play is the MLB and the FB will have a violent collision. Pees knew this. The coaches script the plays for practice. I go over to Pees and say, “ISO first play?!” He says, “Well Bru, gotta make sure you’re ready to go.” 😂 We share a laugh and I leave that practice feeling like a football player again. We as players knew Pees loved us and we loved him back. Enjoy retirement old man! #Backerhood

On this day: In 2003, the Red Sox signed a “journeyman” designated hitter named David Ortiz. Then 27, Ortiz was coming off a disappointing stretch of seasons with the Twins. Hampered by injuries, he’d never been able to reach his potential.

That offseason (following the 2002 season), Minnesota decided to cut ties with Ortiz. As Pedro Martinez once explained, it was a fortuitous encounter with Ortiz at a lobster restaurant in the Dominican Republic that sparked the latter’s eventual Red Sox destiny.

Upon finding out that Ortiz had been released by the Twins, Martinez jumped at the chance to lobby Boston to sign the unemployed slugger.

Eventually, Red Sox general manager Theo Epstein got Ortiz on a one-year deal worth $1.25 million. It was an historic bargain.

“We think, all the scouts think, he has a very high ceiling,” Epstein told Boston Globe reporter Gordon Edes. “You’re looking at a player with the potential to be a middle-of-the-lineup bat in the big leagues.”

“From 1 to 9, we have some tough outs, on-base skills and power as well,” Epstein added. “I think we’re going to score a lot of runs.”

His assessment would prove prophetic, as the 2003 Red Sox would score a league-leading 961 runs, setting new records in slugging percentage (beating the 1927 Yankees) and extra-base hits.

Ortiz would go on to be one of the most consequential players in Red Sox history, averaging 34 home runs a season from 2003 through his retirement in 2016. More importantly, he was at the center of three World Series wins, including the dramatic 2004 run that saw the Red Sox win the team’s first championship in 86 years. 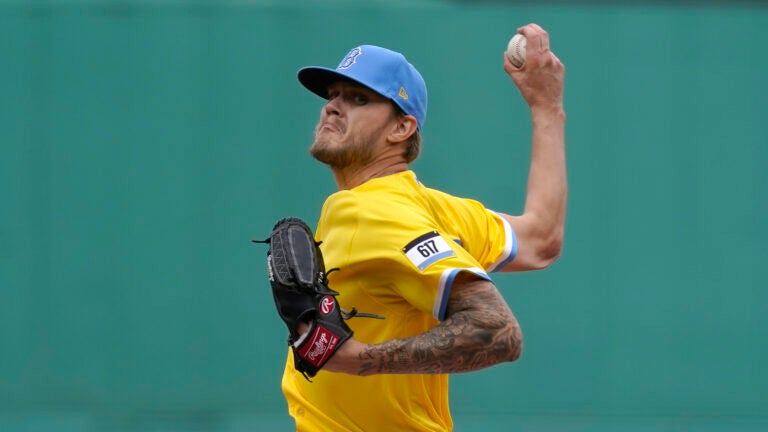