Red Sox owner John Henry evoked memories of growing up a St. Louis Cardinals fan and watching Stan Musial while doubling down on his team’s decision to trade Mookie Betts during a press conference on Monday in Fort Myers.

“My heart would have been broken if Stan the Man had been traded – for any reason,’’ he said. “Your parents or grandparents surely felt the same way about Ted Williams or Yaz.’’

In an opening statement directed at Red Sox fans, Henry acknowledged fans may feel the same way they felt when the Red Sox traded another homegrown player who was a fan favorite: Nomar Garciaparra.

“All of us in the organization hoped we could avoid ever having to go through something like that again,’’ he said. “But most clubs face similar dilemmas from time to time.’’

Henry said the Red Sox had to make a tough call to try to trade Betts for the maximum amount of value they could after getting an indication that a contract extension for Betts was unlikely. It was at that point that they were open to talk with other teams.

They tossed around the idea but at midseason in 2019, the team was competitive.

But this offseason, a deal finally materialized between the Dodgers and Boston that sent Betts and pitcher David Price to Los Angeles for Alex Verdugo, Connor Wong, and Jeter Downs.

On Monday, Henry (who also owns Boston Globe Media, including Boston.com) lamented the byproduct of the free-agency system: That a fan’s favorite player was likely to walk or get traded.

But he said the system was valuable, that it’s brought labor peace and a stronger financial market for players. He remembered a story about Musial, who tried to leave St. Louis for Mexico, where he’d get paid twice as much.

“Players have rights that Stan and Ted should have had,’’ he said.

Other notes from the press conference:

■ Henry said the Red Sox were “happy with the return’’ for Betts, despite the fact that Verdugo will likely miss the start of the season with a stress fracture in its back. Team chairman Tom Werner agreed.

“Obviously this is a young talent who we have a lot of optimism for,’’ Werner said. “My understanding is Alex will be playing very shortly after the season starts.

“I think we have to wait and see if the evaluations of Chaim [Bloom, Boston’s chief baseball officer] and our baseball people are accurate, but I’ve talked to a lot of people outside this organization who are very enthusiastic about the talent we received.’’

Verdugo was involved in a police matter after a minor was allegedly sexually assaulted by a different Dodgers player during spring training in Arizona in 2015. Verdugo himself addressed the situation on Saturday, pointing out that charges weren’t filed and that he was “cleared of any wrongdoing.’’

“With that being said, it was a terrible thing that happened. It was in my past,’’ Verdugo said. “It was something that I’ve grown from it; I’ve learned from it.’’

Kennedy said that the Red Sox “did an extremely high level of due diligence’’ on the matter.

“I had a chance to meet with Alex in person this morning,’’ Kennedy said. “And I let him know the entire organization is here to support him and all our players.’’

■ Kennedy made his sales pitch to fans in response to ticket sales being down, saying that some fans may be unaware that not all Red Sox games at Fenway Park are sold out.

Kennedy said that ticket sales are down 15 percent compared to this time last year. 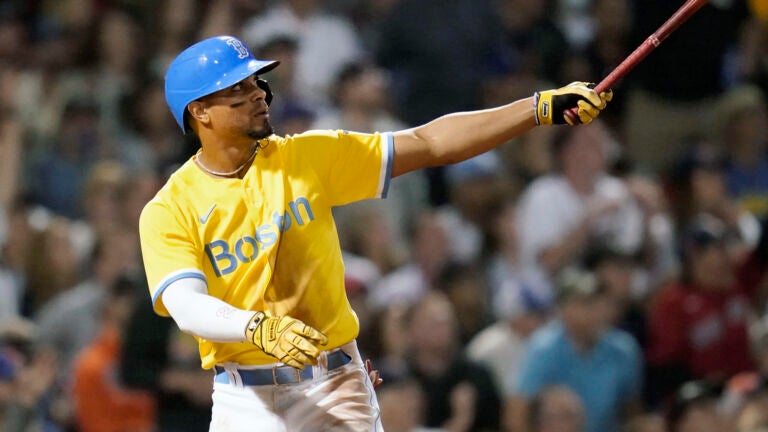