The Bruins defeated the Oilers 2-1 in overtime on Wednesday night thanks to a David Pastrnak goal.

Both the Bruins and Celtics are back in action tomorrow. The Celtics are in Minnesota to face the Timberwolves at 8 p.m., while the Bruins play the Flames in Calgary at 9 p.m.

A look at Pastrnak’s winner:

Back into a tie for the league lead in goals, and doing in style ?@pastrnak96 | #NHLBruins pic.twitter.com/HujCvfW9Xd

One member of that team recently shared his thoughts on the matter, possibly shedding light on differences between what the Red Sox are accused of doing and what the Astros —immersed in a sign-stealing controversy of their own — also did.

Ian Kinsler, who was traded to the Red Sox at midseason in 2018 and was a member of the World Series-winning roster, was interviewed on 1310 The Ticket (based in Dallas). The now-retired Kinsler downplayed the Red Sox system of stealing signs, and doesn’t believe the league’s punishment will be severe.

“I don’t know what [league investigators] are going to find, but in my opinion, it’s not anything close to what’s going on [in Houston],” Kinsler explained. “The Red Sox were just a very tight-knit group. When I was injected into that team in the middle of the season, it was a lot like the Rangers clubs I was on, where it was just a very tight-knit group and their system was flawless. They just had a very good system at relaying from second base to home plate. That was it. Honestly. We’ll see what happens with the commissioner’s report.”

Kinsler also added that the league should “eliminate” the video room, which has reportedly been the source of Boston’s sign-stealing scheme.

“Go play the game,” Kinsler said. “After the game, you can go look at your at-bats, try to figure out what’s wrong. That’s what a hitting coach is for. Let him do his job. Quit running up to the video room in between at-bats to look at whatever you’re looking at.”

Still, Kinsler said he doesn’t see any major punishment being handed down to Boston.

“I’m interested to see what happens with this whole report because I truly believe they’re not going to find anything that’s substantial,” said Kinsler. “They might throw a small punishment out there because they did a report. I don’t know. I don’t know where they stand on this whole thing. We saw where they stood on the Astros thing. I just really don’t see any form of punishment coming to the Red Sox. It was a very good team.”

In the playoffs, it was a different story in terms of sign-stealing, according to Kinsler. Opponents consistently changed signs and disrupted any potential scheme.

“We got a game into the playoffs with the Red Sox. We couldn’t run our system,” Kinsler noted. “It was just too difficult.”

Hint: He was traded to the Bruins from the Vancouver Canucks.

Martellus Bennett has a simple formula for his post-football business plans:

Anytime I have to make a business decision I ask myself “What would Bill Belichick do?”

Jake DeBrusk was interviewed by his father, Sportsnet’s Louie DeBrusk:

“Get the feet going, I don’t want to have to say bad things about you”

Jake DeBrusk being interviewed by his dad is ?

The Patriots’ streak of playoff bye weeks could soon become much more difficult to emulate:

NFL playoff structure is about to be changed. Under the current CBA proposal, seven teams from each conference will make the playoffs, with only bye per conference, sources tell ESPN. It would go into effect this upcoming season. More coming on https://t.co/rDZaVFhcDQ.

Virginia Tech’s Tyrece Radford hit a shot Larry Bird would be proud of:

? with 0.6 on the clock. #HALLin @Mamukelashvili5 pic.twitter.com/hVQPamjmBY 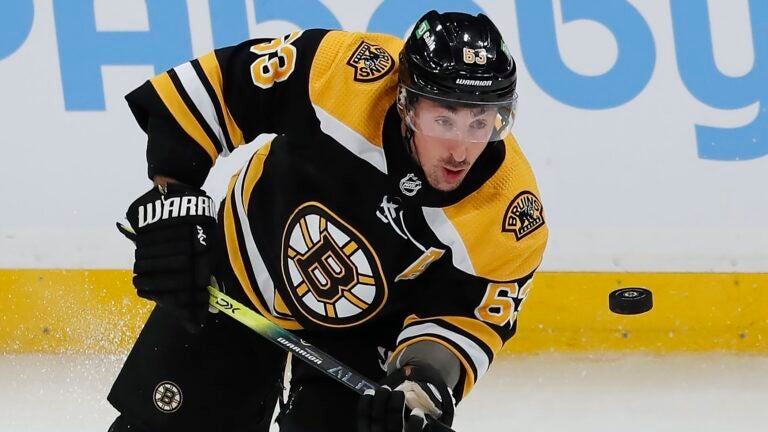 Brad Marchand is a leader, and other takeaways from Bruins-Canucks