There are so many candidates for the second-most important home run in Red Sox history that the MLB Network could put together an hourlong show counting them down before getting to the obvious No. 1. Frankly, after subjecting us to an entire weekend of Derek Jeter content recently, it’s the least it could do.

Carlton Fisk’s if-it-stays-fair homer to win Game 6 of the 1975 World Series would be prominent on such a program. So, too, would another home run from that game, Bernie Carbo’s improbable pinch-hit three-run blast in the eighth inning to tie it.

Dave Henderson’s ninth-inning, go-ahead homer — which brought a perfect, incredulous “… and it’s gone! Un-believable!” call from Al Michaels — in Game 5 of the 1986 American League Championship Series would get its due. So would Ted Williams’s adieu at Fenway in the sunset of the 1960 season, Troy O’Leary’s grand slam against the Indians in 1999, and a half-dozen homers from the David Ortiz postseason oeuvre. Maybe more than a half-dozen.

(Manny Ramirez’s walkoff homer in Game 2 of the 2007 ALDS might not rank as one of the dozen or so most important homers in Red Sox history, but it might be my personal favorite. He annihilated that baseball. I can’t count the times I’ve watched that one on YouTube the last 13 years.)

But every one of those magical, memorable home runs is competing for second place on the podium.

The most important home run in Red Sox history is Johnny Damon’s second-inning grand slam in Game 7 of the 2004 ALCS.

I’d say this is indisputable, except that every time the subject has come up in Twitter conversation, it becomes a matter of dispute, with the aforementioned home runs all drawing “yeah, but” mention as its equal or even superior.

As special as they are, they are not as important. And that should not be disputed. Damon’s grand slam changed Red Sox history. It changed everything.

The slam, which turned a 2-0 lead into a holy-cow-this-is-actually-happening 6-0 advantage and brought Yankee Stadium to stunned silence, was the hit that never happened before, the one the Red Sox could never quite muster in 1946 and ’67 and ’75 and, oh yes, in 2003, when a 5-2 lead in Game 7 of the ALCS slipped away in the eighth inning.

Damon’s slam eased some of the tension in the most tension-packed game we could ever imagine. And he did it, on the road, at Yankee Stadium, after the Red Sox had fought back from a three-games-to-none deficit in the series to force a Game 7.

If you were the cynical sort then — and most of us were, rightfully — the only way ’04 could have ended up more disappointing than ’03 is if the Red Sox had rallied from that 3-0 hole, made us believe that the greatest comeback in sports history was possible, and then somehow blown it in Game 7.

We’d waited generations for someone to come through in that manner under such important circumstances, especially against the Yankees. Damon is the one who finally did.

Some of you will cite Ortiz home runs — the extra-innings blast in Game 4 of the series that got the comeback started, or his two-run homer in the first inning of Game 7 that came right after Damon was thrown out at the plate — as the most important.

They are important, for sure. But none of what came before would have mattered a lick without Damon’s game-breaker. His home run was the punch to the throat, the fatal blow, the sea change that finally made Jeter look like he was the one seeing ghosts.

Without Damon’s slam, Ortiz’s earlier heroics in the series and in that game might have ended up as footnotes to another lost cause.

Sure, Ortiz’s Game 4 home run set change in motion. Damon’s was the change.

I believe the Red Sox’ success this century has dulled our memories of just how cynical we had become after the crushing loss in 2003, one that left our souls ground up into a fine powder, one that left our minds wondering why we bothered investing so much time in something that always let us down in the end.

Many among us talk now about having confidence going into Game 7 in ’04. If you did, you’re not someone I encountered that day. No one knew that Derek Lowe — who began the postseason buried in the bullpen — would be untouchable on one day’s rest, or that Yankees starter Kevin Brown would melt into a puddle of ineptitude and rage.

I remember trying to be hopeful. I also remember reminding myself not to be too hopeful, because wouldn’t it be just like the Red Sox to come back from an embarrassing 3-0 hole in the series, then punt away Game 7 just when we believed again? We couldn’t truly believe until Damon and the Game 7 heroes allowed for it.

As one Twitter friend put it, “Let’s face it. Those 4 days in October was really just 96 hours of us all saying ‘Ok well HERE it comes’ over and over until Damon’s granny after which none of us knew WHAT to say.”

Did I mention — you may have heard about this — that they also won the World Series that year? This is why Pudge, Bernie, Hendu, and their classic postseason blasts from the past can’t be No. 1. They didn’t win in the end. They had a moment. But someone else had the parade.

Yeah, Damon bolted for the Yankees as a free agent two years later. He got booed at Fenway in his later years. I understand not liking that he left for them, but any animosity was misplaced. Damon could have batted .997 against the Red Sox as a Yankee and it never would have equaled what he did to the Yankees as a Red Sox player.

Every day he played for the Yankees was a reminder to Yankees fans that the ghosts had been exorcised. I don’t know how they could stand to look at him.

Call it opinion. Argue with me on Twitter if you wish. But I’m calling it fact. Damon’s grand slam in Game 7 of the 2004 ALCS is the biggest home run in Red Sox history. And it always will be.

Here’s to the Idiots. Especially that particular one, on that special October night, when he slammed the Yankees and everything changed.

His second homer that night wasn’t bad, either. 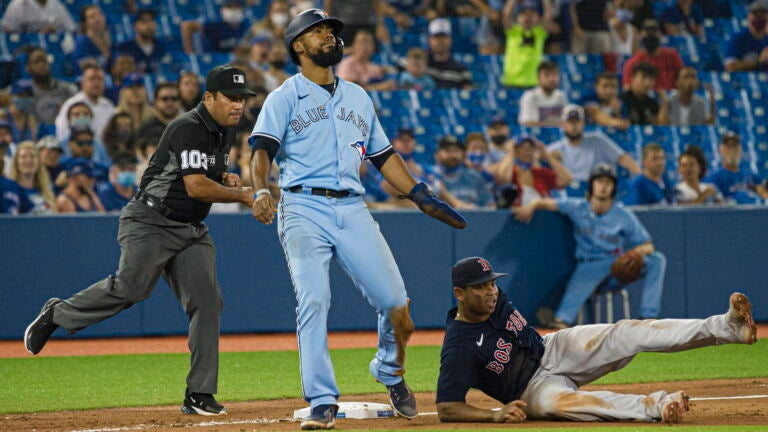 How the schedules break down for Red Sox, Yankees, Blue Jays