And yet overshadowing Toronto’s 9-1 route of the Boston Red Sox on Wednesday night were questions of whether both teams should have played as opposed to sitting out and joining other teams across several sports to protest this past weekend’s shooting by police of Jacob Blake, a Black man, in Wisconsin.

“It’s one of those things that’s weighing heavy on a lot of our hearts,” Tellez said. “We, as a Blue Jays organization, are very multicultural and we support everything that’s going on. Sports around the world have a heavy presence in this. We have a big platform, and a big voice, and that’s something we’re going to use.”

The Red Sox weren’t aware of NBA and MLB teams protesting until shortly before they hit the field for stretches.

“I’m in full support of it,” said outfielder Jackie Bradley Jr., whose mother is a former Virginia state trooper.

Blue Jays manager Charlie Montoyo didn’t rule out the possibility of not playing the third and final game of their series against Boston on Thursday.

On the field, Vladimir Guererro Jr. hit a pair of doubles, including a three-run bouncer down the left field line which keyed a four-run seventh inning for Toronto (15-14).

Down to a three-man rotation, Montoyo’s bid to go with what he called a “bullpen day” of relievers paid off in a game five Toronto pitchers combined to allow three hits, struck out seven and walked three.

Rookie right-hander Shun Yamaguchi (1-2) got the win in allowing one run on two hits over four innings of relief for Toronto, which bounced back a day after squandering a 4-0 lead in a 9-7 loss to Boston. He took over in the third after Jason Merryweather allowed one hit and struck out three in two innings work in his first major league start, and just third appearance.

“He did what we needed,” Montoyo said of Yamaguchi. “It worked out how we mapped it out, but it was because Yamaguchi gave us those four big innings.”

Mitch Moreland homered for the Red Sox (10-21), who are 4-3 in their past seven since snapping a nine-game skid. Colton Brewer (0-2) got the loss in allowing four runs on five hits, including three homers, in 3 2/3 innings.

Tellez broke open the game with Toronto leading 2-1 in the bottom of the fourth.

Guerrero Jr. extended his hitting streak to nine games with a leadoff double into the corner in left field. Tellez followed by crushing a 1-1 pitch to deep right.

Tellez also homered to lead off the second inning, putting Toronto up 2-0. It was the fourth multi-homer game of his career, and second against Boston. He had three two-home run games last year.

Randal Grichuk also homered and drove in two runs for Toronto, which improved to 5-4 at its temporary home in Buffalo, New York.

Red Sox: RHP Nathan Eovaldi (right calf), originally scheduled to pitch Wednesday, instead played catch and was scheduled to throw in the bullpen on Thursday to determine whether he’ll be healthy to start against Washington on Saturday.

Blue Jays: RHP Trent Thornton (right elbow inflammation) was diagnosed with what Montoyo called “loose bodies” in his elbow and is traveling to visit specialist James Andrews on Monday. … Closer Ken Giles (right forearm strain) is scheduled to throw on the side Friday after Montoyo said he fet good a day after his first bullpen session Tuesday since being hurt July 27. … 3B Travis Shaw was cleared to play a day after leaving the opener against Boston after the second inning with a sore right knee. … Blue Jays activated OF Derek Fisher off the DL and called up RHP Sean Reid-Foley while optioning RHP Sam Gaviglio and LHP Travis Bergen to their alternate training site in Rochester, New York.

Red Sox manager Ron Roenicke is not throwing in the towel while knowing Boston has plenty of ground to catch up in going 10-20 through the first half of the season.

“We’re obviously not in a good spot right now, but we know if we have a good week things could change,” Roenicke said, before correcting himself. “Maybe a great week instead of a good week.”

He was answering a question before the game as to when he begins placing his focus on developing players for next year.

“There’ll be a time where we start to talk about what’s going to happen, how we finish up the season,” Roenicke said. “I’m hoping we’re still going forward, but I know we’ll have to get really hot.”

Red Sox: RHP Chris Mazza (0-1 two appearances) is scheduled to be called up to start Thursday. In his first career start, Maza gave up four runs on eight hits over three innings in a 4-2 loss at the New York Yankees on Aug. 16. Roenicke said the team intends to make the roster move following the game.

Blue Jays: LHP Hyun Jin Ryu (2-1, 3.19 ERA ) makes his seventh start, with Montoyo going back to a bullpen plan Friday for the start of Toronto’s four-day set against Baltimore. 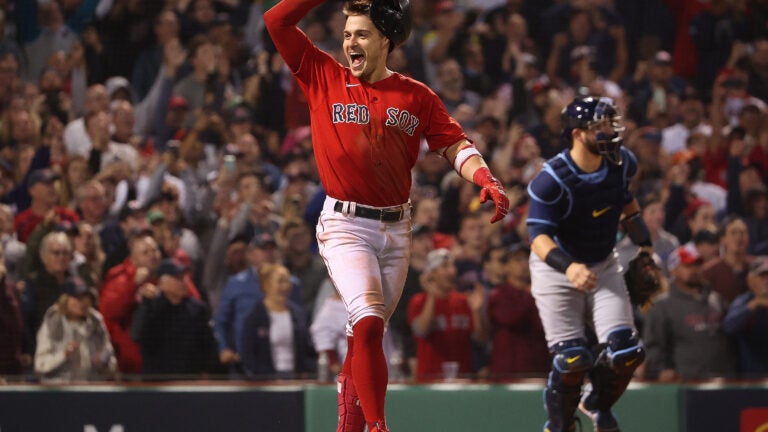 Red Sox remain deeply flawed, but they're one of baseball's final four