Alex Cora is back as manager of the Red Sox less than a year after parting ways due to his role in the 2017 Astros’ sign-stealing scheme.

Cora, 45, who managed Boston to a World Series title in 2018, has agreed to a two-year contract through the 2022 season with a two-year club option for the 2023 and 2024 seasons, according to a news release distributed by the Sox on Friday evening.

Read the complete news release below:

“The Boston Red Sox today announced that they have named Alex Cora as the team’s manager, agreeing to a two-year contract that will run through the 2022 season, with a two-year club option for the 2023 and 2024 seasons.

“I am grateful for the opportunity to manage once again and return to the game I have loved my entire life,” said Cora. “This past year, I have had time to reflect and evaluate many things, and I recognize how fortunate I am to lead this team once again. Not being a part of the game of baseball, and the pain of bringing negative attention to my family and this organization was extremely difficult. I am sorry for the harm my past actions have caused and will work hard to make this organization and its fans proud. I owe John Henry, Tom Werner, Mike Gordon, Sam Kennedy, Chaim Bloom and Brian O’Halloran my gratitude for giving me another chance. I am eager to get back to work with our front office, coaches, and especially our players. Boston is where I have always wanted to be and I could not be more excited to help the Red Sox achieve our ultimate goal of winning in October.”

“Alex Cora is an outstanding manager, and the right person to lead our club into 2021 and beyond,” said Bloom. “The way he leads, inspires, and connects with everyone around him is almost unmatched, and he has incredible baseball acumen and feel for the game. We considered a very impressive slate of candidates – the brightest managerial prospects in the game today. Because of all that had happened, I knew that I wanted to speak with Alex once his suspension ended, but I didn’t yet know if it made sense to consider him for the job as well. Our conversations were lengthy, intense, and emotional. Alex knows that what he did was wrong, and he regrets it. My belief is that every candidate should be considered in full: strengths and weaknesses, accomplishments and failures. That is what I did with Alex in making this choice. He loves the Red Sox and the game of baseball, and because of that we believe he will make good on this second chance. I join our whole organization in welcoming Alex back to Boston and Fenway Park.”

“We are excited to have Alex’s leadership and energy back in the Red Sox dugout,” said Red Sox President & CEO Sam Kennedy. “Our ownership group and leadership team appreciate the thorough search conducted by Chaim and the entire Baseball Operations department that led to this decision. Alex brings to this position a record of success at the highest level, an embrace of the intensity of the Boston market, a connection with our core group of players, and an appreciation for the culture and individuals within our organization. During his Red Sox career as a player and manager, Alex continually made us better. He owns, and has learned from, his past mistakes, and with his incredible talent, he will build on the deep bonds he’s fostered over time to make us better in the years to come.”

A native of Puerto Rico, Cora led the Red Sox to the best 10-game (9-1) and 19-game (17-2) starts in franchise history in 2018. Boston’s 108 wins that season were the most in the majors, as well as the second most for an individual in his first season as a major league manager, trailing only Ralph Houk’s 109 wins in 1961. The Red Sox went 11-3 in the 2018 Postseason, as Cora became only the fifth person to win a World Series in a first season as a major league manager.

Cora made his Major League Baseball coaching debut in 2017 as bench coach of the Houston Astros, helping guide the club to a World Series title that season. Prior to being hired by the Astros in November 2016, Cora spent four years (2013-16) as a baseball analyst for ESPN and ESPN Deportes. He appeared on several television programs, including Baseball Tonight, Beisbol Esta Noche, and SportsCenter, and contributed to ESPN Radio and ESPN Deportes Radio.

During his time with the Red Sox, Cora batted .252 (176-for-698) in 301 games, splitting time primarily between second base and shortstop. He was part of Boston’s Division Series roster in 2005 and appeared in four games during the club’s 2007 World Series title run, including two games in the Championship Series and two in the Fall Classic. He also served as the Red Sox’ starting shortstop in three games during the 2008 postseason.

Selected by the Dodgers in the third round of the 1996 June Draft out of the University of Miami, Cora reached the College World Series in each of his three years with the Hurricanes (1994-96). 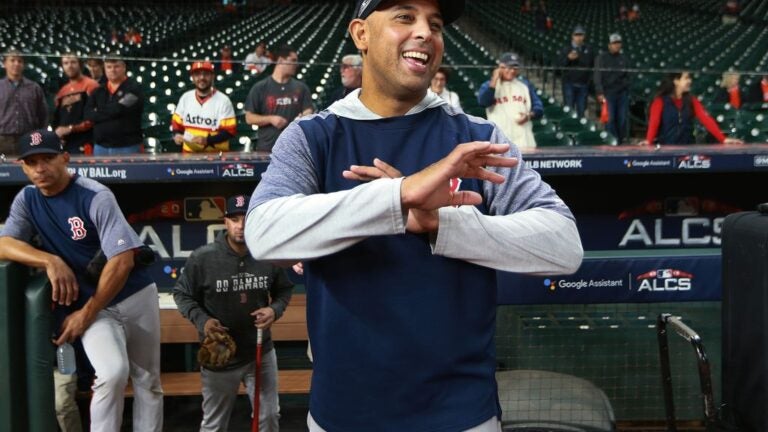