If you navigate baseball-reference.com’s summary pages for the 2020 Major League Baseball season in a certain way, you can almost deceive yourself into finding normality among the achievements and accolades.

Old friend Mookie Betts led the majors in Wins Above Replacement, and the Dodgers to their first World Series title since 1988. The Red Sox should get some guys like that.

Some kid named Yastrzemski for the Giants made his grandfather proud, putting up a .968 OPS, and why didn’t Mike Yaz get a shot at the majors many years sooner, anyway?

The Yankees’ D.J. LeMahieu won his second career batting title, leading everyone with a .364 average. The Mets’ Jacob DeGrom won the National League strikeout title for the second straight year.

Familiar names, familiar feats. It looks almost normal, that data on the screen. Oh,  it also helps if somehow you can trick yourself into forgetting everything else about last season, including the truth.

There was a baseball season in 2020. But it never felt the same, because like just about every other sweet tradition and anything else meaningful in our daily lives over the past year, it wasn’t the same.

The COVID-19 pandemic arrived to wallop our country in ways both predictable and unfathomable a year ago this month, just as MLB teams were rounding third base in spring training and heading for home and the start of the regular season.

It was difficult, and perhaps even irresponsible, to care about baseball when the virus was tearing through the country, magnifying our political divides (we couldn’t, and still can’t, even agree on wearing masks), and numbing our souls with a death toll that would surpass a half-million Americans.

Maybe there’s something to be said about baseball being a welcome distraction. Heaven knows we’ve needed those. But a 60-game schedule with an array of adjusted rules at a time in front of no fans at a time when there was conversation to be had about whether they should be playing at all?

Baseball wasn’t a distraction, or a respite for a few hours from the relentless worrying about your loved ones. It was where it should have been. It was an afterthought.

It was especially easy to avoid investment around here. The Red Sox practically encouraged fans not to care, first by trading Betts in February, then, when the season started in  July, losing 27 of their first 39 games.

They were miserable. I’d set the over/under on members of the 2020 Red Sox who will never see another day in the majors again at 12. And I might take the over. Any hope they had of providing some escapism instead turned into full-blown annoyance at what they had become. Beyond listening to the candor and humor of Jerry Remy, Dennis Eckersley, and Dave O’Brien on NESN’s broadcasts, there was no satisfying reason to tune in.

So I must admit, it was with some surprise recently that I realized how much I’m looking forward to this new baseball season – and yes, even the Red Sox. I’m curious: Do you feel that way too?

Part of it for me is a work-related kind of withdrawal. The last sports thing I’ve covered in person was spring training almost exactly a year ago. I was in Fort Myers from March 1-8, one day talking to Dusty Baker about whether the Astros were baseball’s new villains (he’s a gem of a person, but wasn’t especially interesting in that angle coming from a Boston writer), and the next spending the better part of a day with Alex Rodriguez as he prepared for an ESPN broadcast (I’m almost sure he was the last person I shook hands with). It’s a dream assignment, one I’ve been fortunate to have for a couple of years, and I dearly miss being there now.

There have been beacons, large and small, in recent months, that have amplified that surprising anticipation of the new season. And I’m not just talking about the catharsis of stepping outside at 5:30 p.m. a few days ago and realizing there was still light in the sky. The pandemic still is not in past tense, and the process for getting vaccinated has been a debacle, but watching a loved one get the shot inspires at least some hope that better times aren’t too far ahead.

The Red Sox are back in our consciousness now, too, playing their second spring game of the season and first on NESN Monday afternoon. Their roster is much deeper and more versatile than a season ago, with respected veterans Enrique Hernandez Marwin Gonzalez, along with high-upside outfielder Franchy Cordero and pitcher Garrett Richards, among the intriguing arrivals. With good health and a little luck, they’re going to be better than most of the preseason prognosticators will tell you.

I’m envious of the select number of fans – masked up and appropriately cautious, I hope — being allowed into JetBlue Park to watch.

There was a season in 2020. There were even some notable and familiar achievements, some satisfying statistics to be found on baseball-reference.com.

But it wasn’t the same, that irregular season. How could it have been?

Baseball wasn’t gone. We were. So good to be back. 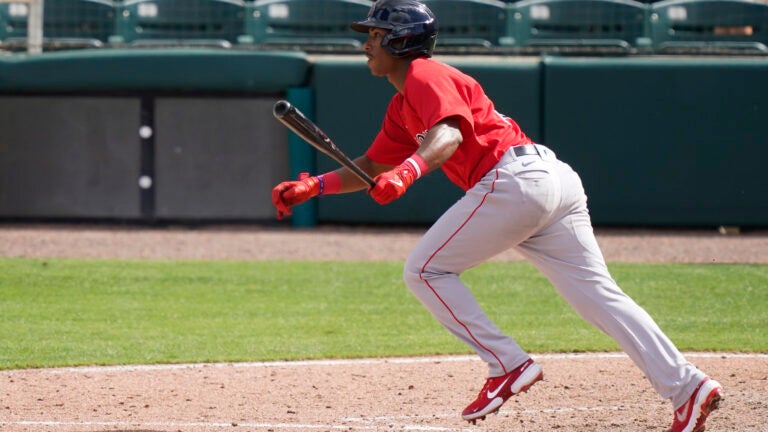