In 2007, Dan Kelly made himself famous in an unconventional way: TV cameras captured him throwing a piece of pizza at a fellow fan at Fenway Park — an occurrence that caused the Red Sox broadcast to chuckle for quite a while.

Kelly recently spoke to the MLB Network about the events that led up to his famous toss. He told Matt Monaghan that the throw had been brewing for a few innings on a rainy afternoon.

“We get breakfast and mimosas and get ready for a fun day of baseball,” Kelly told Monaghan. “But there was a huge rain delay, so, you know what that means: [more mimosas]. Some of us can handle it, some of us can’t. I’d like to count myself among those that can — besides one brief moment.”

Kelly and his wife had standing-room tickets, but they found their way down into the stands. Kelly bought an entire pizza to share with his wife and friends, but a nearby fan began heckling him. The fan had been exuberantly yelling at other fans for multiple innings, according to Kelly. When Kelly arrived with his pizza, the fan began asking for one.

“He sees me hand my wife a slice and he says, ‘Your wife’s got better taste in pizza than in men,'” Kelly said.

Then a foul ball approached his section, and Kelly saw his chance. As beer spilled on the heckling fan, Kelly launched a slice of pizza at him as well. It bounced off his shoulder, leaving behind pizza sauce.

“Something clicked in my head and I said, ‘Here’s your pizza, you asked for it!'” Kelly said.

Kelly was kicked out of the game shortly afterward.

“If you see the video, he’s kinda egging me on to fight him,” Kelly told Monaghan. ” … His girlfriend’s trying to calm him down and his friend’s laughing. But at the same token, he was kinda laughing too at the end. It calmed down pretty quickly.”

Here’s the full video of the incident.

Kelly also went on MLB Network’s Hot Stove on Thursday. He told the hosts he tried to hide his affiliation with the incident at first because he was starting a new job.

“I definitely denied as much as I could and tried to not have my name associated with what was going on,” Kelly said. “Unfortunately, one of my friends spilled my name all over the media. … It got out pretty quickly, and God bless my poor mother. She was pretty embarrassed.” 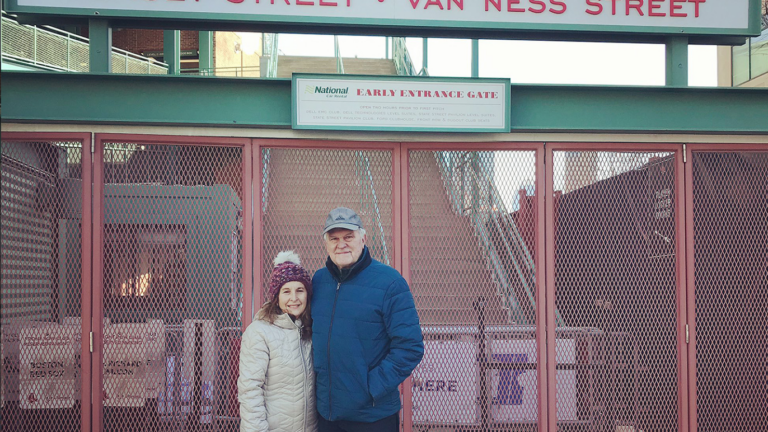