1. Maybe you noticed that none of the six writers that predicted the 2021 postseason participants in the Globe baseball preview section picked the Red Sox to earn a playoff berth. I suspect I might have been the closest to doing so, giving it serious consideration before deciding the Sox will finish in the 83-win range and fall a few games short.

Two years ago, the last time teams played a full 162 games, the Brewers had the worst record among wild card teams at 89-73. The Red Sox’ hopes this year would have benefited from keeping last year’s eight-playoff-team format, or at least by adding a third wild-card team in each league. The best hope to me is that they end up playing meaningful games through September.

I was feeling pretty good about not picking them when the lousy breaks started stacking up this week: Matt Barnes testing positive for COVID-19 and the potential effects that could have on his teammates, Christian Vazquez taking a stray baseball off the eye socket, Eduardo Rodriguez coming down with a dead arm. For a team that for a variety of reasons must start well – and should, with six of their first nine against the Orioles – it was a lot to endure.

But wait: The news isn’t so grim after all. Barnes was determined to have a non-infectious positive for COVID-19 – I know, I’d never heard of that either – and was allowed to return to the team, with his close contacts also allowed to return, surely with a deep exhale. Vazquez said he says there’s a “99 percent” chance he’ll be ready for opening day, and felt fortunate that he had sunglasses on to protect the eye. And Rodriguez, scratched as the opening day starter, looked strong in a bullpen session, and his absence opened a spot for Tanner Houck, who is one of their five best starters anyway.

Turns out the bad breaks could have been worse. Maybe it’s a sign they actually will have some good fortune this year.

2. Interesting tidbit from a recent conversation with a ‘70s Red Sox star, part 1: Fred Lynn was a fan of Andrew Benintendi’s game, but said he never really bought the comparisons between the two of them when it came to their swings. “Out swings are both lefthanded, but it’s we’re very different. He has this short, compact swing. And I didn’t have a short compact swing. Mine was long and fluid. He has shorter arms, where I’ve got the wingspan of a guy who is 6-foot-3,’’ said Lynn, who is 6-foot-1. “Swing-wise, I think we’re really different. But neither one of us is a very big guy. We’re not Jim Rice or David Ortiz. And we could both go the other way and use Fenway to our advantage.” Lynn slashed .347/.420/.601 in 440 career games at Fenway. Benintendi, who is hitting .231 with a .692 OPS this spring with the Royals, has put up a .279/.350/.450 line in 238 games at Fenway.

3. Interesting tidbit from a recent conversation with a ‘70s Red Sox player, part 2: Dennis Eckersley said he sees a little bit of young Mark McGwire in Bobby Dalbec. “I just got a little rush thinking about this,’’ said Eckersley. “How about the next Mark McGwire? How about dropping 49 bombs? Wouldn’t that be fun? I mean, I know it’s a stretch. But maybe? He is built like McGwire when he came up, and the power is something else.” Eckersley was traded to the A’s in April 1987, joining the club for McGwire’s record-setting rookie season, when the slugger hit 49 homers, including 33 before the All-Star break.

4. There are legitimate concerns about the Red Sox’ outfield defense (and really, their defense overall), at least compared to what we’re used to the last few seasons. Alex Verdugo should be average in center field, and Hunter Renfroe has been impressive there this spring, especially for someone who has played exactly four games (one start) and 15 innings at the position in his five big-league seasons. Franchy Cordero can play center, which means he should be capable in left. Kiké Hernandez can be spectacular in the outfield, but he seems poised to get more time at second base. Marwin Gonzalez is dependable but unspectacular, while J.D. Martinez’s defense makes us grateful baseball had the foresight to implement the designated hitter in 1973. This group should be adequate, but Sox pitchers that have been here awhile will occasionally find themselves longing for the days when Jackie Bradley Jr. and Mookie Betts seemed to cover the entire diamond themselves.

5. Does Verdugo qualify as a breakout candidate? Or do we count last year’s 53-game sample, when he hit .308 with an .844 OPS and 22 extra-base hits, as his official breakout? Over 162 games, his 2020 numbers translate to 18 homers. 49 doubles, 190 hits, and 110 runs. Here’s a small-sample oddity: He had just 15 RBIs last year, which would be 46 RBIs over a full season. Wouldn’t shock me if he doubled that total this year. I believe he’s the hitter Andrew Benintendi was supposed to be. Bet you didn’t know Verdugo was 12th in the AL MVP voting last year. It was the second straight year a Red Sox player finished 12th, with Rafael Devers coming in at that spot in ’19.

6. Coming off his monstrous 2019 breakthrough in which he led the majors in doubles (54) and the American League in total bases (359), Devers was just OK last season, hitting 11 home runs with a .793 OPS. I have little doubt that he will put up big numbers at age 24 this season – it’s clear how good he is, and that weird ’20 season affected different people in different ways. I’m more curious to see whether he figures it out at third base. He made 14 errors last year on 128 chances, an .891 fielding percentage. How bad is that? When Butch Hobson made 43 errors at third base in ’78, famously having to sometimes readjust the bone chips in his elbow before throwing across the diamond, his fielding percentage was .899.

7. Mookie Betts told GQ in a candid and wide-ranging interview that he thought he’d be with the Red Sox for life and had begun looking for a house to purchase in the Boston area. But the offer that would pay him what he could have expected to get on the free agent market in the pre-pandemic world never came. At this point, if you’re sticking with the narrative that he never would have stayed here, no matter what, you might as well be calling him a liar.

8. Alex Cora is an excellent manager. Whether you think he deserves the second chance or not, it should benefit the Red Sox to have him back. But I don’t believe for a second he would have made a difference over Ron Roenicke with last year’s 24-36 team. By my estimation, at least eight of the 27 non-position-player pitchers they used last year will never see another big league inning. Joe McCarthy reincarnated couldn’t have won with that staff.

9. Three takes that will either look really good or really bad come September. 1) J.D. Martinez won’t finish with a batting average above .250. 2) Garrett Richards will be the Red Sox’ second-best starter, after E-Rod. 3) If he can figure out how to stay on the field, Franchy Cordero will mash. 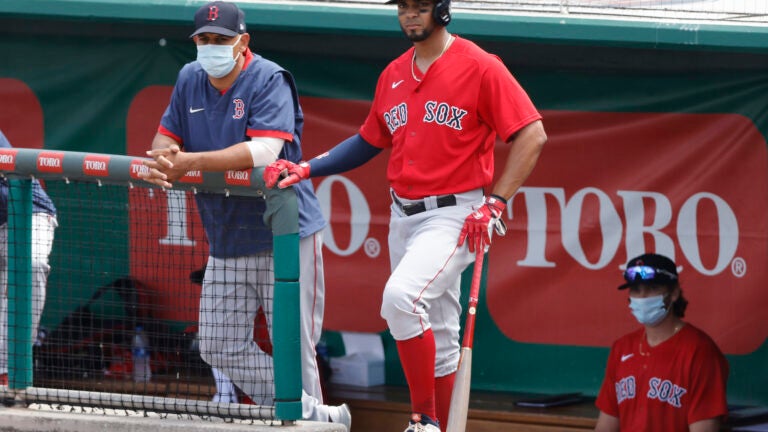