The streaming service frustrated its Red Sox (and Bruins) fan subscribers when it dropped NESN from its lineup In November. The sides never got close to reconciliation — YouTube TV considers NESN’s per subscriber rates too steep — before baseball’s Opening Day, and so Boston fans that use the service were left scrambling for a way to watch their team.

Turns out making it harder to watch the Red Sox may have been an accidental gesture of good will, sparing fans some early-season misery. The Sox, winless in three tries this season after getting outscored by the presumably lowly Orioles, 18-5, in a season-opening sweep, have been darn near unwatchable even for those who can watch them.

It’s embarrassing, which is a feeling this franchise should be pretty used to over the last year-plus. After last season’s 24-36 debacle, the Red Sox needed to start well, for many reasons, none more important than to assure their rightly skeptical fans that this year would not be a repeat of last year.

So, what have they done? Nothing much, other than to remind everyone of last year. Good job, fellas. Way to start this out right.

It’s not the same. It just has felt that way through the first three games. The manager, of course, is different — Alex Cora is back after his one-year banishment — and he will make a difference over the full 162 games.

But it is fair to wonder if his spring training preparation is somehow lacking. The Red Sox’ Chillin’ With The Champs approach to spring two seasons ago led to a slow start from which the 2019 team never fully recovered. Now they come out like this (points at flame-engulfed dumpster adorned with a Red Sox logo).

The only victories so far are those being claimed by the I-told-you-so crowd that thought this team would be wretched. Count me among the dwindling minority that believes this roster is far superior to last year’s and that most of the current issues are repairable, not that rational semi-optimism makes these three games any less maddening. If you haven’t been able to watch them, well, you’re pretty lucky.

This team is not as bad as it has looked. It is not close to as bad as it was last year. That will be proven over the long haul. But some evidence through the first series of the season sure would have been helpful.

Some of the problems are genuinely concerning. Some aren’t worth worrying about at all. The offense, averaging just 1.67 runs per game despite facing New York legend-for-a-fleeting-moment Matt Harvey and the Zimmermann you’ve never heard of (Bruce), actually belongs in that latter don’t-sweat-it category.

Other than J.D. Martinez (6 for 12, the team’s only home run), the Red Sox bats have been left in cold storage. Get this: Xander Bogaerts, Rafael Devers, Alex Verdugo, Kiké Hernández, Bobby Dalbec, Hunter Renfroe, and Franchy Cordero had two hits and two total bases in 66 plate appearances. They have three fewer hits than White Sox rookie Yermin Mercedes had by himself Friday night.

The Red Sox were fifth in the American League in runs per game last year (4.87). They should be right in that range again, maybe even better. All of the aforementioned names should be productive, though Cordero is a wild card and Renfroe, who hit .156 last year for the Rays, would be my main candidate to flop on this roster.

The Red Sox should be patient with Dalbec (0 for 11, five strikeouts). Growing pains shouldn’t be a surprise, but the benefits of his prodigious power will come.

The pitching is more concerning, though anyone thinking this is as bad as last year didn’t pay attention last year. The Red Sox, after the Garrett Richards mess Sunday, have a 5.33 ERA. Their ERA for the 60-game season last year was 5.88.

There have been encouraging signs that were lost in the frustration of the sweep: Nate Eovaldi was excellent in the opener, Tanner Houck was unleashing a slider that might be illegal in several states, and Garrett Whitlock was electrifying in relief Sunday. It’s telling that the staff Fielding Independent Pitching (FIP) is 2.25. There were a couple of disastrous performances — Richards’s and Josh Taylor’s Sunday, namely — but the bigger problem is that the pitching was let down by the offense and defense.

The defense is going to be the prolonged problem with this team, and the biggest annoyance of this season. The outfield defense is OK, but there’s going to be at least one gapper that falls in per series where we say, “JBJ would have had it.” Maybe more than one. I don’t want to hear from those who complained about Jackie Bradley Jr. all these years and now want to lament that he’s gone.

The infield defense? Well, it’s not 1996 Sox-level bad, when Dan Duquette tried to get away with Wil Cordero at second base and Mo Vaughn had his Mitt of Steel at first, but it’s close. Xander Bogaerts is smart, but he’s average. Hernandez won’t lack for hustle, but he’s probably better in the outfield. The Problem, Capital P, is that Devers is playing third base like his career goal is to be a designated hitter.

Devers has the hands, arm, and range to be fine over there, but his fundamentals come and go, and every throw has become an adventure. I’ve heard some suggest Cora should flip Devers and Dalbec on the corners, but Dalbec has enough to think about as a rookie, and Devers has played more professional innings at shortstop (one) than he has a first base (zero). He can play third. It’s on him to prove it.

The same applies to the team as a whole, really. They can play, especially with comparison to last year. But the Sox are three games past the time to show it. If they’re not careful, even those who can watch them on TV won’t care to. 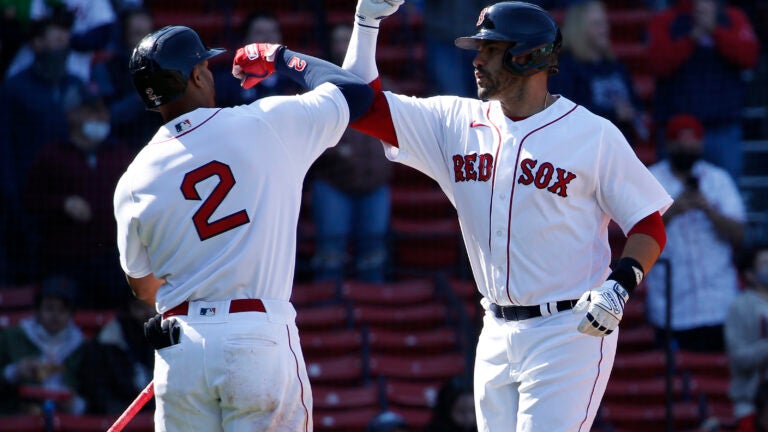