But Thursday will do just fine for the now-28-year-old southpaw, who makes his opening start of the 2021 season and his first since 2019 after opting out of last season with myocarditis due to COVID-19.

“He’ll get the ball on Thursday. There’s no limitations,” Cora said to reporters via Zoom Wednesday, saying Rodriguez will not be on a pitch count. “Obviously, we’ve got to be careful, but he pitched on Friday (at the alternate site), he threw a bullpen, so he’s good to go.”

Rodriguez was originally named the Opening Day starter by Cora after posting an ERA of 2.63 in four spring training appearances. But the southpaw struggled with “dead arm” at the end of the exhibition games and landed on the injured list before the season, leading Nathan Eovaldi, Wednesday’s probable starter, to take his place on Opening Day.

With Rodriguez back in the fold, the Red Sox optioned Game 2 starting pitcher Tanner Houck to the team’s alternate site in Worcester to make room on the roster.

The Red Sox manager said starting center fielder Alex Verdugo will get the day off Wednesday. That means versatile utility player Kiké Hernández will take his place in center flanked by Hunter Renfroe in right and J.D. Martinez, normally the team’s designated hitter, getting his first regular-season start in left field. Martinez only played in the field six times last season but did make two starts in left during spring training.

Cora also said Xander Bogaerts could likely be out of the lineup tomorrow in order to get two days of rest — Boston is off on Friday — before the team’s first road series in Baltimore.

Devers on the rebound?

Rafael Devers is having far from an ideal start to the season; he came into Tuesday night’s game against the Rays without yet registering a hit. That changed with two singles last night, one of which tied the game in extra innings against southpaw reliever Jeffrey Springs.

The opposite-field single in the 11th inning makes Cora believe Devers is getting closer to where he needs to be.

“I think the lefty-lefty base hit told me more about where he’s at,” explained the manager. “To be able to track the ball and shoot it the other way, that’s a good sign.

“We didn’t face too many lefties in spring training. All of a sudden, you go out there and you face two right away. We got one today, we get another one in two or three days in Baltimore. Sometimes you need that.”

Devers and the Red Sox will stand in this afternoon against Tampa Bay southpaw Ryan Yarbrough, who threw a scoreless 5.2 innings in his first start against the Miami Marlins before potentially getting another shot at Orioles left-hander John Means — who shut them out Opening Day — this weekend. 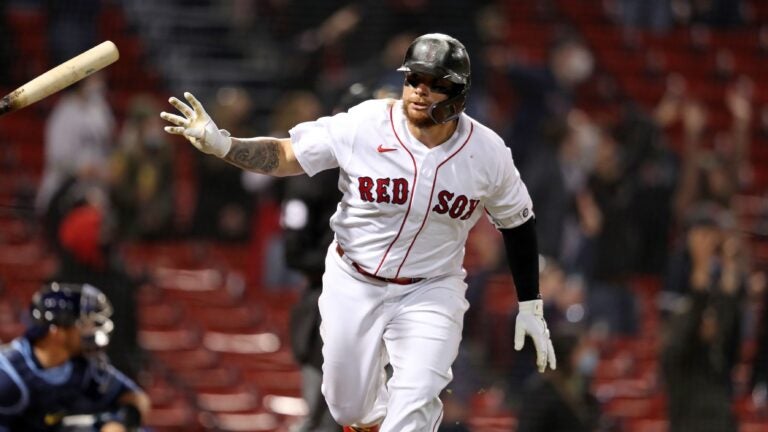 How to watch today’s Red Sox game on YouTube