First pitch for the Red Sox’s Wednesday matchup with the defending American League Champion Tampa Bay Rays is set for about 1:10 p.m., which means Red Sox manager Alex Cora’s press conference starts earlier than usual — about 10:15 a.m. in this case.

As is custom in these parts, long-time WBZ sports reporter Jonny Miller kicks off the presser with a question about Eduardo Rodriguez’s availability before the floor opens up to inquiries on the general state of the Sox after Tuesday night’s grueling extra-innings victory.

All in all, Cora takes and responds to questions in both English and Spanish for about six minutes. Then, after thanking the room, he gets up and walks away from the Red Sox-themed backdrop in whatever room the team has set up for Zoom press conferences in the bowels of Fenway Park.

The reporters all simultaneously drop out of the Cora interview link and click into another that will tentatively host Rodriguez himself about 10 minutes later. A look around the Zoom room shows some writers, like Miller, already at the ballpark, with the pale green of the Fenway press box showing on the walls behind them. Others prepare to ask questions from the comfort of their homes or are just listening in with both their microphones muted and their videos off.

Then, a team representative says Rodriguez won’t be available to join us virtually until about an hour before game time to talk about his upcoming Thursday start — the kind of delay everyone working from home can relate to these days.

Eye in the sky

After grabbing a press credential and entering through the Gate D checkpoint — but not before filling out the Red Sox’s mandated health screening application — an elevator ride up to the fifth floor lets you out at the top-most section of the park, just off to the first-base side of home plate.

Small groups of masked fans stroll around the upper deck, hardly noticing a glass door through which you can see a room marked with celebratory portraits of Boston’s last four World Series championships.

Inside that room is another staff member who scans press credentials and lets media inside the press box. What looks like a normally busy cafeteria behind the press box’s front desk is devoid of tables and chairs, as is the small concessions booth down the hall — though you can still stroll down the left-field concourse to Vineyard Vines and grab some Regina’s pizza slices if you have a mind.

The championship photos on the walls look like the most lively part of the place, with the narrow hallways largely traffic-less a half-hour before game time. The four-tiered press box itself, which normally can seat around 80 people at its maximum, holds at most 20 today. Blue tape marks across the work stations encourage at least six feet of berth between writers just as the zip-tied seats down below keep fan pods removed from one another.

But once you’re inside, the unmistakable feeling of baseball strikes you: the sight of the pristine infield diamond and the players warming up on the outfield grass; the faint smell of sausages floating on the crisp spring air coming through the open press box windows; the pregame organ music; and the low but steady hum emanating from the 4,751 fans in attendance — the feeling of pandemic-induced separation overcome by the intimacy of taking in a game at the oldest ballpark in America.

Real cheers from living, breathing people then greet the starting lineups for the Red Sox, the conclusion of the National Anthem, and the pop of Nathan Eovaldi’s first strike to Rays leadoff hitter Yoshi Tsutsugo — a 97-mile-per-hour fastball — against the mitt of catcher Kevin Plawecki.

The crowd gasped — and Rafael Devers cringed at the plate — in the bottom of the first as a foul ball rocketed toward a fan along the third baseline (the fan ended up being alright) and ignited when Christian Vázquez almost detonated a cutter onto Lansdowne Street for a two-run home run to give the Sox a lead they wouldn’t relinquish.

It sang the chorus of Neil Diamond’s “Sweet Caroline” late in the game with gusto, chanting “So good” even after the music had cut off.

Finally, as Red Sox reliever Josh Taylor prepared to throw his 2-2 pitch to the Rays’ Josh Odom with two outs in the top of the ninth, the swelling of claps around the park, urging Taylor with feverish enthusiasm to put the game away, erupted into triumphant shouts as Odom struck out to end the game.

At no point could the car horns coming off the Mass Pike or the surrounding streets be heard while the game lasted.

When the last writers file out of the press box and head for home around 5:30 after taking in postgame interviews from Cora, Eovaldi, and Vázquez — again on Zoom — all is quiet. The field is empty, with not even a groundskeeper or stadium staffer in sight. The streets around the ballpark are largely deserted, shops locked up for the day. No one’s lingering at the bars.

You almost wouldn’t have known a baseball game, attended by thousands of fans, had taken place at Fenway Park just a few hours ago. But one did, and hopefully, many more will follow. 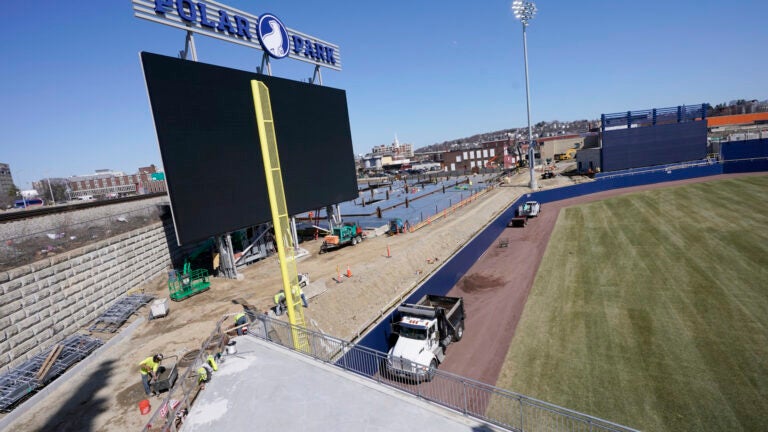