Monday’s Red Sox-White Sox series finale had the makings, on paper at least, of a battle between two of the best pitchers in the American League so far this season in Boston’s Nathan Eovaldi and Chicago’s Lucas Giolito.

By the end of the first inning, that storyline went out the window.

The Red Sox raced out to a big lead, scoring six runs in the first inning, en route to earning a series split against the White Sox with an 11-4 win.

Despite the odd 11:10 a.m. Patriots Day start, Cora’s squad didn’t look bothered in the slightest, jumping all over Giolito early, tacking on insurance runs throughout the game, and briefly seizing back the best record in the American League at 11-6.

Here’s a recap of the action.

Make no mistake, Lucas Giolito is one of the best pitchers in the American League. He came into the game with just a 2.55 ERA and had allowed just nine hits on the season.

But the Red Sox had the perfect plan of attack against him, and it showed.

The first six Boston batters Giolito faced reached on base hits after Christian Vázquez’s bunt was officially changed from an error to a hit. Six of those hits, including Kiké Hernández’s leadoff home run, came off of Giolito’s changeup, his signature pitch. That’s more hits he’s allowed on changeups to any team this year.

Boston forced the White Sox starter to throw 46 pitches in the first inning, hanging six runs on him in the process. Then, on the first pitch of the bottom of the second, J.D. Martinez took Giolito’s deep, adding another run. Giolito’s day ended for good after he walked Rafael Devers in the next at-bat.

The @RedSox are mashing on Patriots' Day. That's HR No. 6 for @JDMartinez28. 💪 pic.twitter.com/ef2FwtoY93

The Red Sox went on to add two more runs off of reliever Zack Burdi.

The lineup that entered Monday with the best batting average (.277) and third-most runs scored (85) in baseball kept up its hot-hitting ways, scoring 10 or more runs for the third time this year and racking up 17 hits — though Red Sox fans still weren’t pleased that the offense couldn’t get to 20 against infielder Danny Mendick late in the game. Can’t win them all, right?

On the other side of the bump, Eovaldi didn’t have the smoothest of starts in the first inning either, giving up a leadoff single to Tim Anderson and seeing him come around to score on a rocket double from Luis Robert. Then, the current Red Sox ace had to warm back up after the marathon bottom of the first.

But Eovaldi stayed sharp and kept attacking the strike zone, never allowing the White Sox hope for getting back into the game and pitching into the seventh inning before giving way to Garrett Whitlock. He scattered nine hits, allowing four runs and notching 10 strikeouts for the first time this year.

“When we got this guy in 2018, this is what we envisioned: a guy was attacking the zone,” Cora said after the game. “He preaches that…he’s been amazing.”

“My focus is first pitch strike, get ahead of them, and stay on the attack the entire time,” Eovaldi added. “If I’m not striking guys out, hopefully I’m getting quick outs, going deep into the ball game. That’s been my main focus: make them earn their way onto the base paths.

Speaking of Whitlock, Cora said before Monday’s game he’d be relying on the reliever to bridge the gap to his late-game arms after a trying few games for the bullpen. With the Red Sox holding a big lead late in the game, the manager extended Whitlock to save the bullpen even more.

The 24-year-old righty delivered, covering the rest of the game from there without allowing a single White Sox hitter to reach base.

Boston will continue its homestand tomorrow with a brief two-game set against the Toronto Blue Jays before squaring off against the AL West-leading Seattle Mariners.

Alex Verdugo entered Monday with a .391 batting average over his last seven games. Game No. 8 in that stretch is going to make those numbers look even better.

The Red Sox center fielder went 3-for-4 with a home run, his third of the year, and reached base four times in total.

Vázquez and Martinez added three hits of their own, while Martinez, Hunter Renfroe, and Franchy Cordero each had two RBI. Martinez now has an MLB-best 20 runs knocked in. 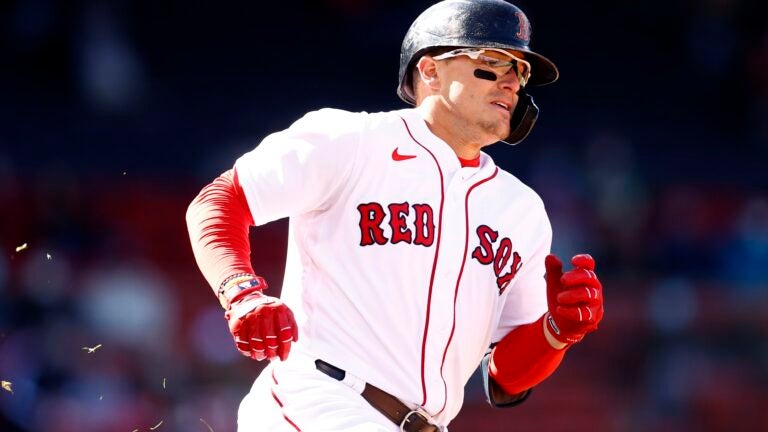