The last time Garrett Richards took the mound for the Red Sox, he gave up six walks, four hits and four earned runs in just 4.2 innings in a loss to the Orioles — one of several lackluster starts in his first four appearances this season.

On Tuesday, however, Richards found the strike zone. The results were encouraging for the Red Sox, who improved to an American League-leading 15-9 with a 2-1 victory over the Mets. Richards struck out 10 batters, gave up seven scattered hits in seven innings and walked no one — a major reversal from his early struggles to find the plate.

So what changed? Richards said he has been working to simplify his delivery.

“We came up with something that would be simple for me to be able to repeat and importantly, it gives me a chance to gather over the rubber instead of kind of rolling through it like I was,” he told reporters after the game. “Just making an emphasis of getting a good gather over the rubber at the top has really helped me.”

The difference is clear when pitches are placed side-by-side.

Pretty significant mechanical change for Garrett Richards. Working more out of the stretch, a lot less movement while throwing towards the plate. pic.twitter.com/9wgrRh4J6g

Richards said the resulting, tighter delivery helped him stay in the strike zone.

“Before, I was shifting all my weight to my left side, and then bringing my foot back into the slot and then lifting the leg and kind of drifting over towards the third base side, and then having to hurry up with my arm to kind of get back in the zone,” Richards said. “There was just kind of a lot of east-west going on vs. north-south, and that’s kind of our thought process right now. It’s just getting more north-south and trying to find a delivery that will help us stay consistent.”

Richards has also been working to improve his curveball. He said he has never had more confidence in the pitch than he does now.

The Red Sox’s potent offense only generated two runs for Richards, but that was all he needed. His only real challenge late came in the sixth when the Mets got runners to first and second, but J.D. Davis flew out to left to end the inning. Richards pitched one more perfect frame, then handed the ball off to Matt Andriese.

Richards called Cora’s decision to send him back out for the seventh inning “huge.”

“Just in the short amount of time that I’ve got to watch him kind of orchestrate this team and how the flow of the game goes, I couldn’t be happier,” Richards said. “You know he’s a guy that if we’re getting in a foxhole, we want him in our foxhole.”

A reporter asked Alex Cora what was working for Richards.

“Besides everything?” Cora quipped. “Everything.”

Before Tuesday’s game, Richards had an ERA of 6.48 and an 0-2 record. His performance on Tuesday dropped his ERA to 4.94 and nearly doubled his total strikeouts (22) this season.

“I know that I haven’t been pitching great as of late, but I’ve been putting in some good work and we’ve been seeing some improvements,” Richards said. “And to be able to go out and pitch and see some positive results from the work that we’re putting in is definitely reassuring and helps me move forward with some confidence.

“Not that I wasn’t confident before, but obviously results help confidence.”

Cora said Richards looked more like the pitcher the Red Sox signed to a one-year deal in February.

“We know stuff-wise, he is one of the best in the league,” Cora said. “And if he can repeat his delivery, it’s been under control, we know that he can do this every five days. …

“It was a quality start and gave us a chance to win.” 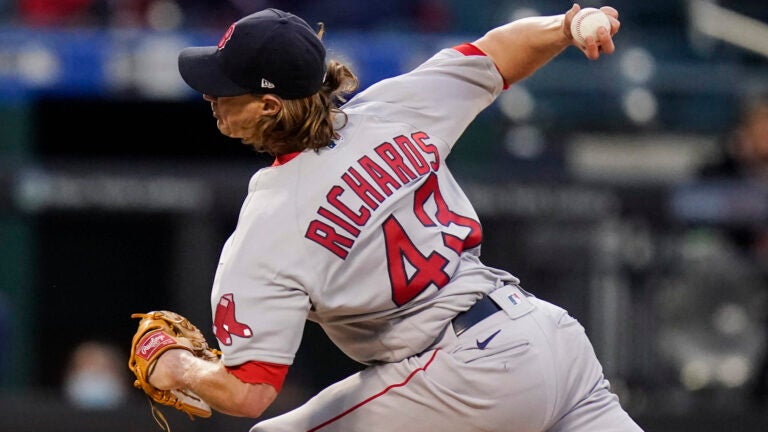