On Tuesday, Hunter Renfroe launched his 100th career home run in the fifth inning of the Red Sox’s 11-7 victory over the Tigers.

The solo blast — Renfroe’s third of the season — gave the Red Sox a 9-3 lead. The ball caromed off the Green Monster seats and back onto the grass, where Robbie Grossman picked it up and lofted it to fans sitting along the left-field line.

The only issue: The homer was Renfroe’s 100th in his career, and the Red Sox had to track down the ball. Red Sox staffers could be seen in the stands discussing terms with the fan who came up with it.

On NESN after the game, Caron and Tim Wakefield reported that the Red Sox did end up retrieving the ball. In exchange, the fans were given a ball signed by Eduardo Rodriguez and Garrett Richards — two pitchers who weren’t in the dugout. Caron noted that normally fans would get a chance to go to the clubhouse and meet the player after the game, but this fan was robbed of that opportunity by COVID.

Renfroe was asked about the ball after the game.

Renfroe admitted that reaching the milestone of 100 career home runs was a big deal.

“Any person that says it doesn’t [mean a lot] is lying,” he said. “Any time you can get a big milestone, 100th career home run, 200th career home run, 500th RBI, it means a lot. Those are not easily done. People that come in the league and stay in the league are the only guys that really get to do that. The guys that just come in and go out, it’s tough to get 100 home runs and 4-500 RBIs or whatever. Any kind of milestone needs to be celebrated in baseball, and I think it’s awesome.” 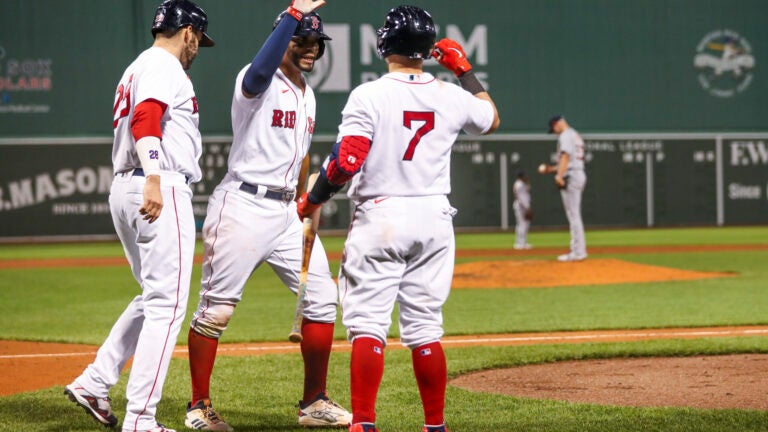