Franchy Cordero has had a rocky start to his Red Sox tenure, batting just .153 in his first 23 games with the team after an 0-for-25 slump dropped his average from .348.

On Thursday, however, Cordero replaced Kiké Hernández in the lineup and broke out with a 3-for-5 performance that included an RBI double and three runs as the Red Sox outlasted the Tigers 12-9.

Cordero was asked about his slump after the game.

“Obviously, it was tough,” Cordero said through a translator. “This is a hard game. If it was easy, then everyone would be able to do it. I just kept working. I was working hard with the coaches, spoke to a lot of guys. A lot of my teammates came up to me and would always try to give me some advice as well. Coaches such as [Jason] Varitek, he came up to me and spoke to me about hitting. Everyone, it was a team effort trying to get me right, and I’m just happy I was able to have a good game today.”

Cordero said Varitek, also a lefty, gave him some advice on his approach and other “minor details,” but he said Varitek mostly just wanted to be there.

That was a common theme for the Red Sox, who were universally happy for the 26-year-old outfielder who arrived in Boston as part of the deal that sent Andrew Benintendi to Kansas City.

“Great kid,” Christian Vazquez said. “He’s still learning, he’s young. I think he’s going to be good for us. He needs to continue to work and be confident in the play. Like today, he looked confident and relaxed and swung at good pitches. That’s him, he enjoyed the game. He had a great game today.”

Alex Cora praised Cordero’s fielding as well, noting that it was “good to see him smile.”

“It’s not easy, hitting at this level is not easy,” Cora said. “People think that he’s not putting work, but he’s putting in work. He was aggressive right away, and that gave him confidence. He got the hits and he made contact when it mattered at the end. He hustles all the time, which is great. He puts pressure on the defense, and we were able to score.” 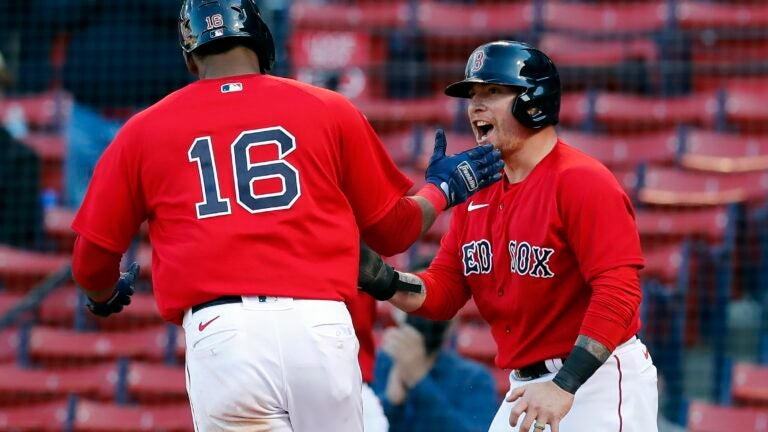