Bob Cousy was told to remember two lines, but the 75-year Worcester resident had a lot more to say.

“I’m Bob Cousy, as you’ve just been told,” he informed the crowd at Polar Park in Worcester’s Canal District on Tuesday, gathered for the inaugural Worcester Red Sox home game as they took on the Syracuse Mets.

“You’re being nice,” Cousy quipped. “If my name is even fairly familiar to any of you, that probably means you’re receiving your social security check.”

Cousy continued to speak for a few minutes. He thanked everyone for the “privacy, love and respect” the Worcester community showed his family over the course of his life. He noted that the city has been “electrified” by the arrival of the Red Sox’s Triple A club.

Finally, Cousy said the line he was actually supposed to deliver. “With all that said: Play ball.”

“It’s a really satisfying day,” Worcester city manager Ed Augustus told Boston.com. “To just see the ballpark be received so positively by the people of Worcester and beyond, and people’s sense of civic pride that this is their hometown. I don’t know how many people said, ‘I can’t believe I’m in Worcester looking at this ballpark.’ Seeing the excitement of it, it just makes it all worthwhile.”

Augustus said the most gratifying moment of the afternoon was walking off the field and hearing fans yell their gratitude for the city’s work to land the minor league club. Polar Park was filled to 25 percent capacity per Massachusetts regulations — 2,377 in attendance at the stadium that seats 9,508. That opened enough room for the roughly 2,100 fans who already purchased season tickets.

Allen Pennington of Chicopee was one season ticket holder in attendance. He brought his friend Devin Colon, and they moved from their seats behind home plate to right-center where the breeze wasn’t so chilly.

The duo quickly realized they were in an active part of the park. Syracuse catcher Deivy Grullón blasted a homer over their heads that cleared Polar Park entirely (estimates placed it at nearly 475 feet). The next inning, WooSox first baseman Josh Ockimey hit a shot over the fence that a nearby fan snagged.

“This is home run alley,” Colon exclaimed to Pennington.

As if to drive Colon’s point home, the next batter after Ockimey — WooSox star outfielder Jarren Duran — ripped a homer over the wall. The ball bounced to the chain-link fence behind Colon, who hustled over to grab it.

“I lucked out that we’re at 25 percent capacity, because I probably wouldn’t have got it,” Colon told Boston.com. “So at the season opener, I got a home run.”

Grullon’s homer, meanwhile, was scooped up by another fan, Jose Diaz, who maneuvered around the chain-link fence and left the park entirely to pick it up. The ball rolled all the way to a construction site and nestled up near a traffic cone.

Polar Park is still surrounded by construction. The green outfield is picturesquely outlined by Worcester’s hilly skyline, but much of the outside area visible from inside the stadium remains a work in progress.

“This whole area will become like a mini-city with a garage that we’re building and a hotel, two units of housing, and a lab building,” Augustus said. “This was abandoned for almost 30 years, and to see it all at once transformed into something that kind of becomes a destination for New England I think is really satisfying.”

The game itself was an entertaining slugfest. The WooSox fell behind 2-0 in the first. WooSox left fielder Marcus Wilson hit a solo homer in the second inning, the first homer in Polar Park history. Martin Cervenka homered in the fifth for the Mets, but Duran hit his first home run — a two-run shot — to even the game in the bottom of the frame.

The teams exchanged runs, but the WooSox scored two in the eighth to give themselves insurance, and reliever Kaleb Ort coaxed a double-play in the top of the ninth that clinched an 8-5 victory for the WooSox.

“Everyone here wanted to put forth a good effort and thankfully it worked out in our favor,” manager Billy McMillon said via Zoom after the game. “It’s really nice to see a lot of people in the stands. It seems like it was more than 25 percent, but a lot of buzz, a lot of excitement in the air, and it was really cool to open up a stadium for the WooSox and get a W.”

The WooSox put together an impressive collection of celebrities for their home opener. Pedro Martinez was in attendance, as was Massachusetts governor Charlie Baker. James Taylor and his son played the national anthem.

And, of course, the WooSox appreciated Cousy’s opening monologue, even though it was considerably more than two lines.

“When you live to be 90-plus and the impact in basketball and the community that he’s had, it was no problem giving him the stage and letting him speak,” McMillon said. “But yeah, it was really cool to see him, see Pedro. I’m sure a lot of guys are going to take a lot away from that, particularly since we punctuated it with a W.”

– The WooSox covered a wall on the third level of the stadium with souvenir program covers from their history in Pawtucket, featuring covers from every year since 1973. The covers feature plenty of familiar faces, including Dustin Pedroia and Mookie Betts.

The displays are meant to honor the team’s history, but as one employee put it, the team also values the potential for “a fresh start.” – The park features displays with memorabilia from Larry Doby, the second Black athlete to play in the Major Leagues, as well as legendary Negro Leagues club the Homestead Grays. A third display featured minor league and independent league memorabilia from the area, including jerseys from West Boylston and Grafton teams circa the 1940s and news clippings of the Worcester Busters. The Busters competed in the New England League and were led by Hall of Famer Jesse Burkett, whose Little League program is still active in Worcester nearly 70 years after his death. – Jarren Duran finished 2-for-5 with two homers and three RBIs. Jeter Downs was 1-for-5 with three strikeouts, while Connor Wong was 1-for-2 before being replaced in the fourth inning. 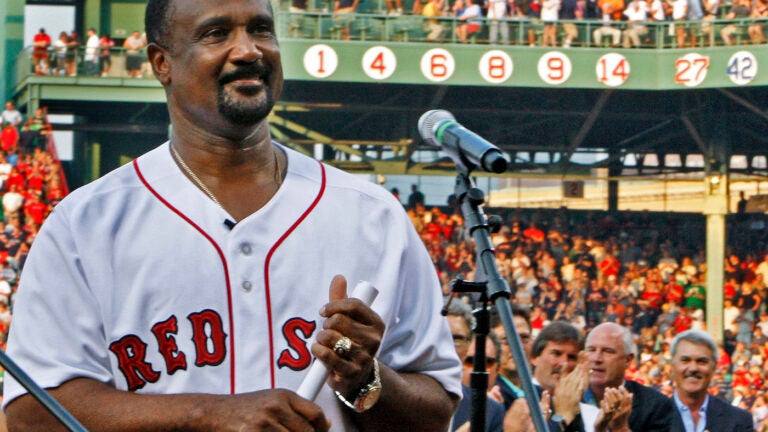