Just how different are these Red Sox from what we expected? Just how good are they?

Every team has games like Tuesday’s, when Boston squandered two golden chances to pile up runs against Atlanta’s Charlie Morton, then were shut down almost entirely in a 3-1 loss. Those games seem more worthy of focus, though, when we’re constantly trying to judge how we got this team wrong. Or whether we did.

They’re in the midst of a testing part of the schedule: This weekend’s series against middling Miami is the Red Sox’ last stop before seven games at Houston and Yankee Stadium, followed by Houston and Toronto at Fenway, followed by the return two-game set at those better-than-their-record Braves.

It should be a clarifying couple weeks, even if they just muddle through around .500 — nothing wrong with that. As colleague Chad Finn noted, the playoff odds calculators don’t give the Sox a lot of credit because Baltimore’s been 20 percent of their schedule. Nights like Wednesday, however, when the Sox plugged through an early 3-0 hole and got critical sixth-inning hits to win 9-5, don’t feel like a surprise.

That’s despite what I think are the two big general criticisms of this team: They’re not deep enough, especially in the sense of reinforcements summonable from Worcester, and their lineup is top-heavy. The first feels eminently fair given the only non-injured pitching with the WooSox on the 40-man roster is Colten Brewer and the recently acquired Brandon Brennan. (The guy he got his 40-man spot from, Ryan Brasier, is closing on a return.)

The other, though? I’m not so sure.

Xander Bogaerts, J.D. Martinez, and Rafael Devers are quite the three-headed offensive monster, all among MLB’s top seven in total bases. Bogaerts leads the AL in hits (60), two ahead of Martinez. Devers, meanwhile, consistently clocks the ball as hard as anyone in the majors. He took the RBI lead on Wednesday, reaching 43 with his team-leading 14th home run, and is tied with Shohei Ohtani for the extra-base hit lead with 29.

Beyond that … Alex Verdugo’s .809 OPS is top 20 among outfielders. Kiké Hernández has, outside of his hamstring problems, brought his offensive numbers up to league average with a strong May. Christian Vázquez is fourth on the team in RBI, hitting slightly better with runners on base, but just got dropped in the order. (Offense is not the best way to judge his value.)

Most anything’s going to look slim compared to that big trio, but suffice to say: It’s pretty slim.

That latter group’s .673 OPS would rank 23rd among the 30 teams, and the only ones lower with winning records are the Mets (who have one of baseball’s best pitching staffs) and Cleveland. Exactly one team in the last 17 seasons, the 2011 Giants, has finished with a winning record and an OPS that low.

That isn’t really fair, of course. “If you take the best hitters off a team, they’ll be bad” isn’t exactly a sliced-bread level revelation. To compare apples to apples, I took the top three total-base producers off each American League contender and ran the numbers. How do the Red Sox compare to that group?

The four ahead of the Red Sox all have at least six better-than-league-average hitters — anyone with an OPS+ better than 100 — in their regular lineups. That makes up for not having any one player producing at a Bogaerts/Devers/Martinez level, though Gurriel and Mercedes are in the neighborhood.

Can Boston’s Big Three maintain their pace? Nothing in the batted-ball data raises any significant flags, though Bogaerts is slugging about 60 points higher than history would predict. (Tampa’s Wendle, for comparison, has hit .303 with a .535 slugging than his data predicts should be closer to .240 and .375.)

Should they recede a little, there’s no reason to think Bobby Dalbec can’t pick up some of that slack. Or Marwin Gonzalez, who’s better than we’ve seen. Or, perhaps, Danny Santana, who’s starting to crack the lineup and already siphoning away playing time from those failing to perform.

As we’ve said here before, the offense was never expected to be the problem, and it’s not. The production from Bogaerts, Devers, and Martinez is perhaps a little more than expected, but nothing about it is supremely unexpected given their histories. Certainly not compared to the competency of the starting staff, and the degree to which Matt Barnes has embraced attacking the zone in the closer’s role.

Worrying about the overall lineup isn’t unfair, but it’s also not the best use of energy on a team that’s pieced together 29 starts from Garrett Richards, Nick Pivetta, and Martín Pérez as well as this one has.

With two weeks coming up like the ones these Red Sox have coming up, in a division with two hard chargers in New York and Tampa plus the lurking Blue Jays, that’s the three receiving the lion’s share of my concern. 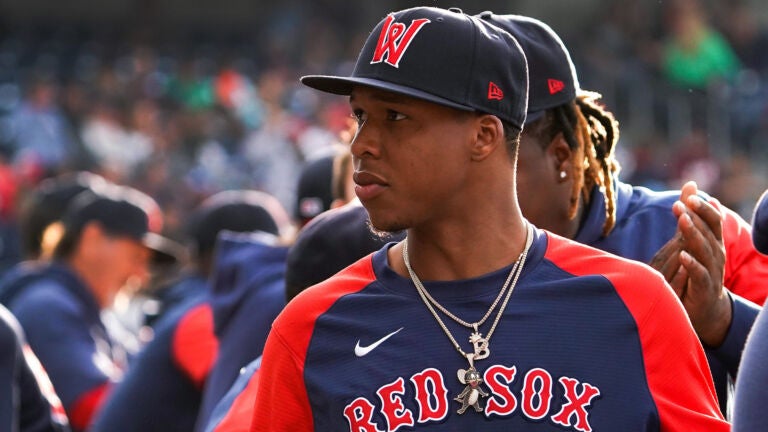