Monday was supposed to be an off day for the Red Sox, and it would’ve been easy to still treat it as such despite the presence of the Miami Marlins, who returned to Boston to clean up last Sunday’s rainout. And, well, they sort of did.

The Sox got home from their first-in-a-decade sweep of the Yankees in the wee hours of Monday, for an oddball 5 p.m. first pitch with an interleague opponent, the day before welcoming the same West-contending Houston Astros that beat them three of four to begin last week. It did have that wingin’ it feel: Kevin Plawecki behind the plate, Christian Arroyo at leadoff, on top of resting J.D. Martinez and his sore wrist for a third straight game.

It all worked, again. Arroyo doubled, got on base three times, and knocked in two runs. They scored on a wild pitch and a throwing error. Nick Pivetta, as Garrett Richards did Sunday night in the Bronx, wormed around plenty of traffic.

It felt as much a bonus as a 5-3 win. The $10 bill in your winter jacket pocket. Miami had repeated shots to go ahead and simply never did.

Pivetta retired three straight after two leadoff singles. The fourth ended on a double play. Adam Duvall fouled out against Garrett Whitlock with two on in the fifth. Hirokazu Sawamura fanned Jesus Aguilar with the bases loaded in the sixth. Jazz Chisholm and Starling Marte went down on six straight pitches as the potential go-ahead run in the eighth.

And Adam Ottavino, closing with Matt Barnes having worked all three wins against the Yankees, allowed a single and two doubles in the ninth before finishing it out.

Sixty games. Thirty-seven wins. Would’ve been the second-best record in the American League last year, but all it’s worth today is a projected AL East title — the Fangraphs model bumped the Sox ahead of Tampa on Tuesday morning, putting Boston at nearly 74 percent to make the playoffs.

Which probably means it’s time to start thinking about boosting that percentage.

“As much as we are in this for the long haul, every chance to make the postseason is important,” Sox architect Chaim Bloom told reporters in New York over the weekend. “We’ve talked about it going back to the offseason, that balance between now and the future and as much as we can trying to do things to help us on both fronts. That’s obviously hard to do. It’s not that simple.”

He’s helped off the top by Chris Sale and Jarren Duran, better than your annual additions from within. The pitcher was back in Boston on Monday and “trending up,” in manager Alex Cora’s words, and the outfielder is now a top-30 MLB prospect, fueling the “when, not if” discussion of his initial call-up to the Red Sox.

Those decisions also require balancing the present against the future, but they’re the starting point here because they cost nothing. And both can help solidify some spongy ground on the Red Sox roster.

Sale helps deepen a rotation leaning on the likes of Pivetta (who threw about 150 innings across the majors and minors the last two years) and Richards (200 total from 2016-20), not to mention the struggling Eduardo Rodriguez (who threw zero last year). It’s imperative that group keeps performing to ease pressure on the bullpen, an apparent weaker link that’s been very solid of late:

Duran? How often have we heard about the young player whose dynamism on the bases invigorates an entire roster? My mind goes to Jacoby Ellsbury scoring from second on a wild pitch in 2007, or the way the Dodgers glowingly spoke of Alex Verdugo in 2019.

Other than first base, the offense is fine (provided Martinez’s injury is as minor as the Sox are playing it). Maybe they’ve found a leadoff hitter for awhile in Arroyo. Maybe they’ll keep searching and keep getting away with it like the 2007 team did, running Julio Lugo out there half the time.

We know, after 20-odd months of Bloom, he’s not going to mortgage the farm even if the Sox start to slip. Which, frankly, doesn’t seem hard to believe with 22 games against the Yankees and Toronto before the July 30 trade deadline, including 15 straight from July 15-29. (Boston also visits Atlanta, Tampa, and Oakland before July 4.)

Anything can happen in seven and a half weeks. But the Red Sox, as they sit today, have an addition to the rotation and to the position players relatively close at hand. There are reasons not to rush either, but both are easy answers to any criticism to not act this year. Beyond the bullpen, anyway.

And while there’s usually a reliever floating around the market each year fanbases rally around as the answer, relief pitching is as volatile as anything in the game.

Which makes trading for it a huge risk.

Again, we’re just crystal balling here, but I don’t think it’s out of the realm to surmise Chaim Bloom isn’t going to overpay — as teams always do — for the annual uberreliever whatever state his team’s in by mid-July. He’ll sniff around bit deals, deals for players with multiple years of team control on the cheap.

I think I’ll be fine with that. I think you should be, too.

The “found money” metaphor above applies far beyond Monday when it comes to these Red Sox, who have been finding a way for 10 weeks now. The series in Houston, when the bats disappeared, the defense got sloppy, and the pitching couldn’t weather a deep lineup was a reminder of what we thought we’d be seeing this year.

That we haven’t is a credit to them, and this second swing at the Astros (with Nate Eovaldi and Rodriguez in line this time) is another opportunity for them to be more than the sum of their parts.

Let’s keep checking how we feel these next seven and a half weeks. But 60 games in, the feeling from 60 in a year ago is beyond night and day. 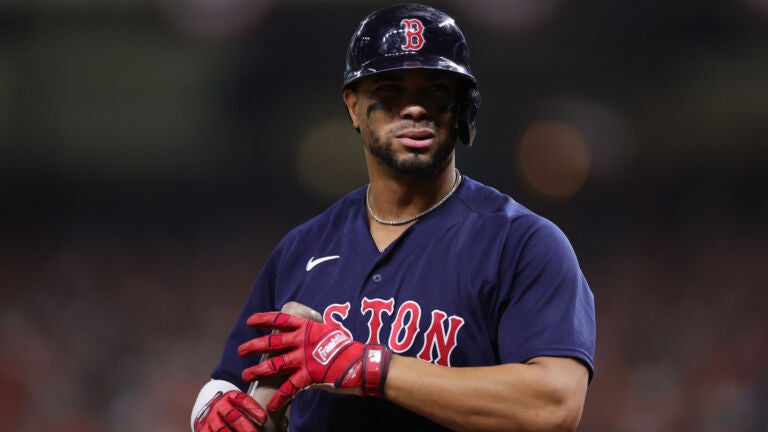