The College World Series is officially underway in Omaha.

While there aren’t many top prospects playing in this year’s College World Series, there are a couple of reasons why Red Sox fans should be intrigued. For starters, the Red Sox hold the No. 4 pick in this year’s MLB Draft, which is their highest draft pick in over 50 years.

The second reason is a pair of pitchers from Vanderbilt. Jack Leiter and Kumar Rocker are widely considered to be the top two pitching prospects in this year’s draft, and both could be available when the Red Sox make their first-round pick. For a team that lacks a true top pitching prospect, picking either Leiter or Rocker to potentially fill that void has to be enticing.

Here is a little bit more on each of the top guys.

The son of former MLB pitcher Al Leiter, Jack Leiter projects to be either the first or second pitcher taken in the 2021 MLB Draft.

Unlike his dad, Leiter’s a righty who has a fastball, 12-to-6 curveball, and a slider in his repertoire. MLB.com’s scouting report of Leiter describes his fastball, which typically moves at 90-95 mph, as an “elite pitch because of its riding life and outstanding metrics.” The website’s scouting report also mentions that some believe Leiter’s slider could work better than his curve because of his “feel for spin.” The website ranks Leiter as the third-best prospect in the draft.

ESPN.com’s Kiley McDaniel compared Leiter to Dodgers ace Walker Buehler because of his ability to “attack the top of the zone with a mid-90s four-seam heater that draws whiffs, and a plus breaking ball largely at the bottom of the zone.”

In his latest mock draft, McDaniel projects the Red Sox to select Leiter with the No. 4 pick. FanGraphs predicts the same, and also dropped a rumor on what they’re hearing about the Red Sox and Leiter.

“Word is Leiter is trying to price himself down to Boston and wants to land there,” FanGraphs’ Kevin Goldstein wrote. “Word is that Boston would love that as well. Thus, a match made in heaven.”

However, the Boston Globe’s Julian McWilliams reported that the chance the Red Sox get Leiter is “still low.”

Leiter’s had a tremendous year so far. Entering the College World Series, his 156 strikeouts this season were an NCAA-best. He holds a 10-3 record with a 2.16 ERA. In his start in Vanderbilt’s Super Regional series against East Carolina, Leiter pitched seven innings, allowing just one run and struck out 10 batters. Leiter will start in Vanderbilt’s second-round matchup against N.C. State on Monday.

A year ago, Kumar Rocker was considered the best prospect of the 2021 draft class. He’s slid a bit this year, with MLB.com ranking and McDaniel both ranking him as their sixth-best prospect in this year’s draft class.

Even though he slid in the prospect rankings, talent evaluators still rave about Rocker. The 6-foot-5 righty throws a fastball that typically moves between 93-96 mph and top out at 99. While he throws a good fastball, his sinker might be more-liked by scouts.

“He notched all 19 of his whiffs in his no-hitter with his slider, a mid-80s beast with power and depth that grades as plus-plus,” MLB.com wrote in its scouting report of Rocker.

The Vanderbilt ace also regularly pitches a curveball in the low 80s. Rocker also tosses a changeup on occasion.

“Rocker’s command has been a roller coaster all spring and some scouts question how his bat-missing methods (fastball blown past lesser hitters, slurve for chases out of the zone) will translate to pro ball, while Leiter (his fastball has much better bat-missing characteristics and at least as good breaking stuff and command) doesn’t have that question,” McDaniel wrote.

Rocker has a 13-3 record this season with a 2.72 ERA. In Vanderbilt’s first-round College World Series outing against Arizona, Rocker pitched 5 2/3 innings, allowing three earned runs on five hits. He struck out seven and didn’t walk a batter. Rocker’s next start would likely come in the semifinals.

A pair of other pitchers to keep an eye on.

If the Red Sox decide not to select a pitcher and go with a hitter at No. 4 instead, there are a pair of pitchers playing in the College World Series that could be available for them at No. 40.

Mississippi State’s Will Bednar had a strong season for the Bulldogs, going 7-1 with a 3.53 ERA in 16 outings. He also struck out 113 batters and gave up only 20 walks on the year. He’ll get the first-round start for Mississippi State against Texas.

Bednar throws a fastball that travels between 93-95 mph. He also throws a slider, a curveball, and a changeup.

“He doesn’t have the cleanest delivery, but he makes it work and has a 6-foot-2, 229-pound frame built for durability,” MLB.com’s scouting profile writes of Bednar. “Scouts like his intelligence and competitiveness as well as his physical traits.”

Virginia lefty Andrew Abbott could also be available for the Red Sox at the 40th pick. He had an 8-6 record with a 3.49 ERA this season and struck out 152 hitters. He got the first-round start for Virginia against Tennessee.

“His fastball is typically in the low 90s, touching 95 mph, and it plays up and misses bats in the zone because of some cutting action and some funk in his delivery,” MLB.com writes in its scouting report of Abbott. “He can manipulate his power breaking ball — a true out pitch — well, slurving it a bit more to run away from left-handed hitters. Abbott hadn’t used his changeup much as a reliever and he’s used it this year, though it needs work.” 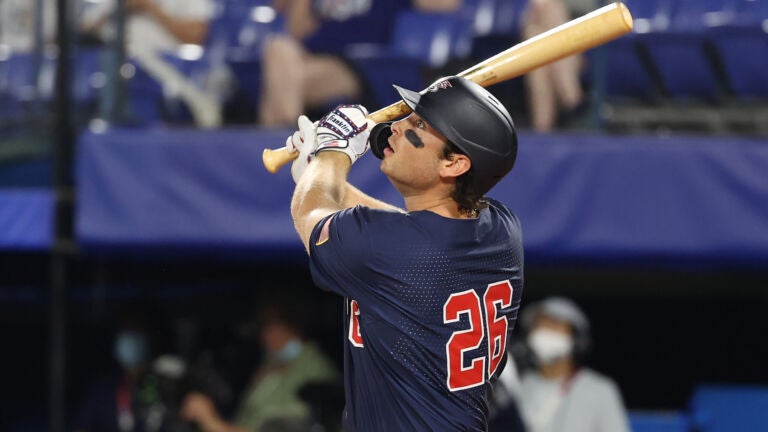